The Falls Curfew: Reassessing the past

On 3 July 1970 at approximately 4:30 p.m. a mixed patrol of British Army soldiers and RUC (Royal Ulster Constabulary) pulled up to No 24 Balkan Street, in the Lower Falls in West Belfast. They were acting on a tip off from a ‘concerned resident’ about a stash of weapons hidden in the property. What happened next is widely seen as having changed the course of the infant ‘Troubles’ and alienated Catholic opinion against the British Army.

The Lower Falls was the bastion of the ‘Official’ IRA. Army intelligence knew that a sizeable amount of weapons were in the area, and were allegedly being stored in case of another ‘attack’ by Protestants. Once word of the search began to spread through the area tempers started to flare. Many people believed that there was to be a major search operation undertaken. The original search team were stoned, more troops were sent in to quell any disturbance and to protect the patrol, CS gas was used, the rioting intensified, shooting began and by the late evening a full-scale battle was underway with British Army troops coming under sustained fire from a sizeable contingent of Official IRA volunteers and a smaller number of ‘Provisionals’. Three people were killed that night, with a fourth dying in hospital nine days later. People of the area reported aggressive behaviour from the troops, ranging from personal assault to damage to property. The troops themselves received sustained fire from some quarters. The situation was a tinderbox.

However, perhaps the most controversial aspect of this whole event was the calling of a curfew at 10.00 p.m. on the Friday evening. The curfew was initiated by General Ian Freeland, General Officer Commanding (GOC) of British forces in Northern Ireland who it appeared, under extreme pressure, instigated it without using the proper diplomatic channels for such an operation. He was later condemned by many parties as having acted illegally.

The curfew was subsequently lifted on the morning of 5 July. Upwards of 3,000 British troops were involved in the operation which netted a variety of weapons, along with bomb-making equipment and thousands of rounds of ammunition. Hundreds were injured.

As the dust settled, the recriminations started. The army stated that they had shot and killed two snipers; both branches of the IRA denied their claims. Secret documents from the period show the confusion in security circles, both within the army itself and the Northern Irish government about the status of the curfew. Was it a ‘curfew’? Was it a ‘search operation’? Or was it a hastily operated mistake? In the British parliament questions were raised about the legality of such an order, with many prominent MPs debating the issue. The Irish government also expressed disdain for what they felt was a dubious decision. However, the ‘curfew’ was subsequently declared legal by a Belfast magistrate, under ‘Common Law’.

The events of this historic weekend have been remembered every year since, commemorations, re-enactments and debates have all kept the events of the Falls Curfew alive in the minds of the people of the Falls Road; their belief that justice has not been done for those who died is still as strong now as it was forty-three years ago. As another anniversary of that fateful weekend approaches there are still no answers to their many questions. They believe that it was an illegal operation, committed to robbing them of the means to protect themselves and the lack of an official inquest into the events has also led to suspicions of a ‘cover up’. Yet, there is no doubt that the situation on the ground was quickly evolving and inflammatory, and one has to ask in what other ways could order have been restored?

If the Falls Curfew was illegal, ordered as it was without official sanction at the time, then the very least that can be expected is an official inquiry. It is only with the passing of time that we can begin to reassess what really happened and to step back from the understandably strong emotions of the moment to seek justice and truth for those men, women, children, and soldiers, who will never be able to forget the tragedy of the Falls.

Disclaimer: The views and opinions expressed in this article are those of the author and do not necessarily reflect the official policy or position of The History Press. 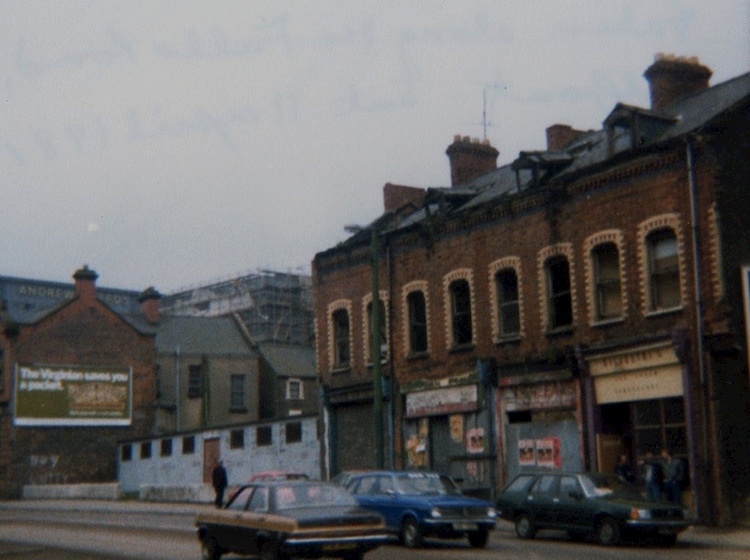 Falls Road, West Belfast in 1981
A mural in Divis Street, Belfast depicting the march that broke through the Falls Curfew