The Falklands War: A chronology of events

On 19 March 1982, Argentine scrap metal workers illegally arrived at Leith Harbour, South Georgia, on board the transport ship ARA Bahía Buen Suceso and raised the Argentine flag. This move led to a brief, but bitter conflict on the Falkland Islands, a remote UK colony in the South Atlantic. During the ten week battle a total of 649 Argentine military personnel, 255 British military personnel, and three Falkland Islanders lost their lives.

Friday, 19 March — Scrap metal workers arrive at the derelict whaling station at Leith on South Georgia and raise the flag of Argentina.

Thursday, 1 April — Naval Party 8901 for the 1981–82 deployment passed operational command to the new Royal Marines detachment; both take up defensive positions in and around Stanley; submarine Splendid leaves from Faslane; orders given for the SBS to mobilise.

Monday, 5 April — Task Force sails from Portsmouth with HQ 3 Commando Brigade and elements of 40 and 42 Commando; Naval Party 8901 arrives back in the UK.

Friday, 9 April — Canberra departs from Portsmouth carrying 3 Para and most of 40 and 42 Commandos.

Map of the Falklands Islands, 1982

Wednesday, 21 April — SBS and SAS teams inserted by helicopter on to South Georgia. 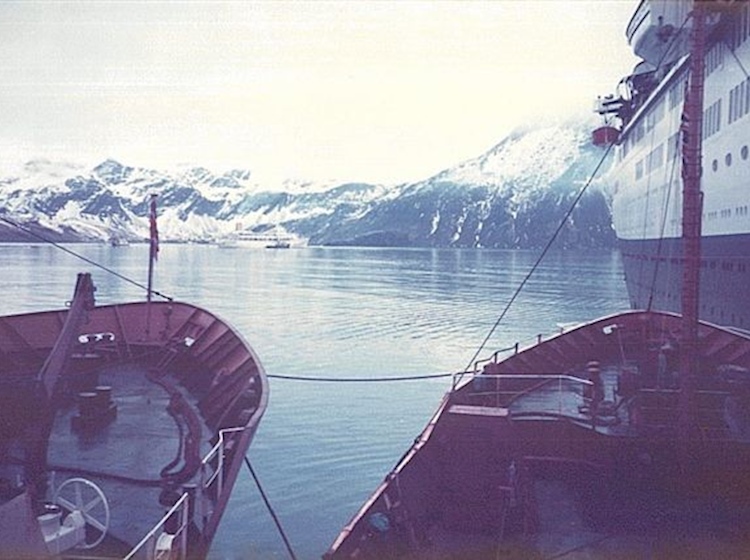 Friday, 7 May — Norland arrives at Ascension; most of Amphibious Group departs.

Saturday, 8 May — First of refuelled air drops flown to the Task Force.

Friday, 14–Saturday 15 May — SAS raid against airstrip at Pebble Island.

Map for the Battle of Darwin & Goose Green
QE2 in Southampton, 1976

Thursday, 20 May — Sea King lands in Chile; crew turn themselves in to authorities and are repatriated.

Monday, 24 May — Sir Galahad, Sir Lancelot and Sir Tristram are bombed in San Carlos Water, but the bombs fail to explode in all cases.

Tuesday, 25 May — Coventry and Atlantic Conveyor hit by Exocet missiles, the former sinking.

Sunday, 30 May — Moore arrives off the Falklands.

Map for landing sites and Beachhead, 21-28 May

Sunday, 6 June — Welsh Guards embark in Fearless for Fitzroy but the ship is ordered not to sail; Scots Guards land at Bluff Cove; 5 Infantry Brigade establishes forward base there.

Friday, 11 June — Major assaults on the outer ring of Argentine defences around Stanley: 42 Cdo at Mount Harriet, 3 Para at Mount Longdon, and 45 Cdo at Two Sisters.

More on modern and military history