Spring follows winter, summer follows spring and with it the English village green comes to life.

On May 1st the village Maypole is bedecked with flowers and ribbons, the village children and, occasionally Morris dancers, dance around the pole and the May Queen is crowned.

The May tree bursts into blossom, flowers start to bloom, little green shoots of wheat, barley and oats break though the earth, the cuckoo can be heard and the Sun starts to get warmer.
But beware, the old English folks have a saying, which is true, ‘ne'er cast a clout till May be out’. It may be the last month of spring, but don’t put your winter clothes away, it can still be cold in May.

May heralds the sound of lawn mowers, cricket on the green and the start of the English village fête season. Whether the village calls it, a fête, a fair, a feast, a festival, a funfair or a fundraiser, the English village fête is an English tradition not a British tradition. The Scots have their Highland Games, throwing tree trunks around and dancing to bag pipes. The Welsh have their eisteddfods with harps, poetry and choirs, but the English have their fêtes. Real fêtes with games, cake stalls, cream teas, Pimms, raffles, baby shows, dog shows and the biggest homegrown onion, or any other allotment grown vegetable, competitions. 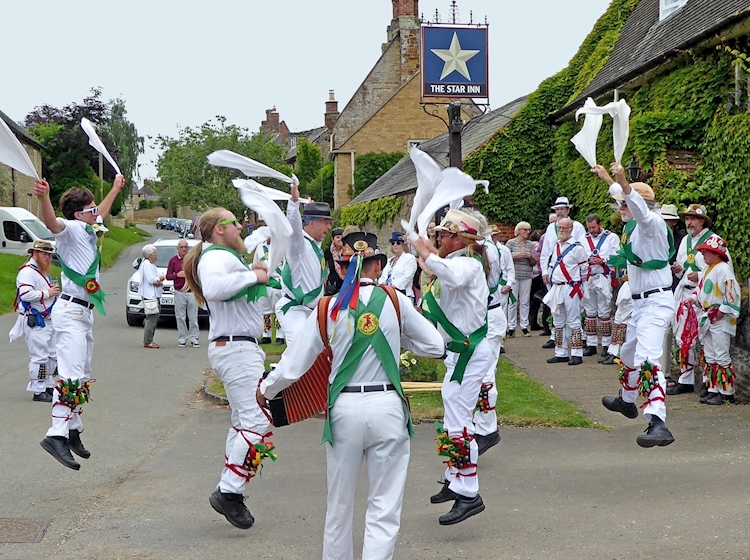 The games played at fêtes are old, traditional and also played throughout the year in village pubs. Nearly all of them test the throwing skills of the player, especially after a pint or two. Typical games include skittles, hoopla, quoits, knur and spell (one game not two) and Aunt Sally. Haddenham in Buckinghamshire, a village which has appeared in the popular TV series Midsomer Murders well over a dozen times, has a human fruit machine manned by members of the local Rotary Club. The only one in the English village world, to my knowledge.

A favourite is Aunt Sally. It’s a pub garden game played in Oxfordshire and surrounding counties. The Aunt Sally was originally a figurine head of an old woman with a clay pipe in her mouth, nowadays she is a ball on a short plinth about 4 inches high, known as, the dolly. The dolly is placed on a three-foot high, doglegged metal spike and players throw sticks at the dolly, trying to knock it off without hitting the spike.

Midsomer Murders aficionados will need no reminding that Inspector Barnaby is an excellent, almost professional, Aunt Sally player, judged by his performance in the episode, ‘Dark Autumn’. Ex-Prime Minister, David Cameron, is a no mean Aunt Sally stick thrower either, but I suppose he has to be, as most of the villages in his former Oxfordshire constituency have an Aunt Sally team in their local pub.

As well as the games, traditional fêtes often include tombolas, raffles, cakes, and home produce such as jams and pickles. Competitive baking is part of the classic British fête inspiring the hit TV series The Great British Bake-Off. The success of TV shows such as Midsomer Murders and The Great British Bake-Off show the continual fascination with the English village, and the quintessential English Village fête.