The cobbled street: Memories of a child

The cobbled streets of Leeds were paved with gold, industrial gold, that only found its way into entrepreneurial pockets of men clad in stiff white collars, frock coats, and gold Albert watchchains draped across their plump abdomens.

Shoeless street urchins, gambolled from cobble to cobble, dreaming of the day when the hand of good fortune might touch them on their bony shoulders and at least provide them with an extra piece of bread. If good fortune was really smiling on them, there would be the luxury of real strawberry jam, spread out to the corners of the slice, instead of the thin scraping they would get only on Sundays at one of the Salvation Army halls, or the Methodist Revival Churches, that had sprung up in and around the Leeds slum areas, following the Wesley and Booth spiritual revival campaigns. Many children attended large mission tent gatherings out of sheer curiosity, and as another place to explore. The local gossipers, and news broadcasters, would find new audiences for their latest exciting news and many would walk the miles to these revival tents to find standing room only, as huge crowds had already staked their claim to a seat.

It was not known at the time that these revival meetings would greatly impact on society’s quest for total reform of the plight of the slum dwellers. Their back to back houses were often grossly overcrowded, in poor structural conditions and lacked basic sanitary amenities leading to disease, ill health, premature adult deaths and high infant mortality. It was not the desire of the majority of these communities to live in squalid conditions. Indeed, many of the homes, though extremely basic in comfort, were in fact kept spotlessly clean through daily scrubbing of floors, black leaded fireplaces and shaken rag rugs. Most of the women prided themselves on their cleaning skills, often demonstrating this by their sweeping of the outside stone flagged pavement and cleaning of the communal midden area. This last shared task was notifiable to each household by the passing to the next of the midden key, often tied on a piece of string with an empty cotton bobbin attached. Shame and scorn to any who failed in their duty to take their turn. The gossipers would be out in force! 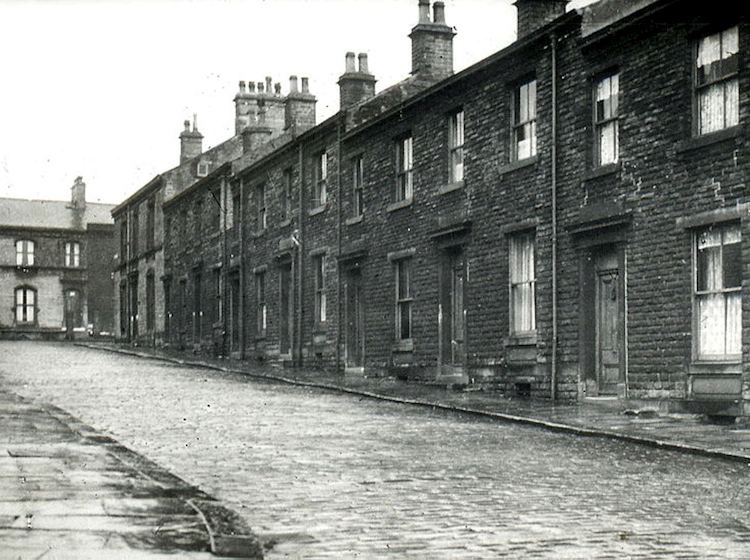 These humble back to back dwellings with their rich social histories would, from the early 1950’s, begin to disperse as the slum clearances and regeneration planners moved to have new housing estates constructed and the poorest conditioned houses demolished. The cobbled roads and hundred-year-old scrubbed flagstones were lifted. Many found their way into the new communities as garden paths, or even dry-stone walls around new modern homes.  The Rag and Bone Man salvaged any scraps of metal and brass fittings, some still gleaming from its original owner’s polishing cloth and Brasso tin. Even a stray full tin would be collected and any remaining polish used to clean the horse brasses, that hung around his horses neck collar. The old, crippled gas lighter would no longer dole out sticky sweets to the children who waited expectantly each night for a sticky toffee, which they relished as they watched the gas mantle flicker into light.

The elderly, who had lived most, if not all their lives, in these areas felt bereft at the loss of their community bonds. Some grieved, others accepted change. Indeed, some residents rejoiced that their arduous household tasks were eased. Now their heavy iron kettles which had provided the means of hot water, or welcome cups of tea on fire tripods, would be condemned to cupboards or used as ornamental reminders of bygone days. New shining kettles would sit on new gas stoves, in separate kitchens. Soon the new washing machine would cut the washing day blues down to half the time required. Clothes and bedding could be washed indoors, without the trip to the wash house and back yard. People lingered in indoor bathrooms celebrating their new found privacy. Life had change beyond all recognition. So many everyday tasks had slipped into the history books of time. A new page will be turned at the midnight hour. History never dies, it is only stored away in memories.