The Battle of Goose Green

Goose Green was the first and the longest battle of the Falklands War. It represented a fourteen-hour struggle waged by the Second Battalion the Parachute Regiment (2 Para), pitted against various sub-units of the Argentine army and air force over nearly featureless, wind-swept and boggy ground, most of it in clear daylight and against entrenched defenders. 2 Para were heavily outnumbered and lacked proper fire support; by all calculations they should have lost. In the event, they not only succeeded, but captured or killed the entire Argentine garrison – a force more than twice their size – and so set the tone for the engagements that were to follow in the drive against Stanley, the capital of the Falklands.

The battle is notable for a number of features. It was fought within just a week of the British landings at San Carlos Water – at the western end of East Falkland, the larger of the two main islands – as a consequence of the political priorities set by the British government to seize the initiative and maintain the momentum of the attack from the outset of the campaign. In doing so, they overrode the judgement of the land commander, Brigadier Julian Thompson, the land forces commander, as unnecessary and a diversion to the main thrust of his offensive against Stanley, clear on the other side of the island. A victory at Darwin and Goose Green, the government and its strategists at Northwood concluded, would form a prelude to further attacks in the drive on the capital. In so doing, it would preserve the high degree of public support enjoyed at home and set a precedent for other successes on the battlefield to come.

Thus, Goose Green stands as an example of how political intervention can and does – for good or ill – interfere with military priorities set by commanders in the field. Thompson was quite right: the Argentines at Goose Green did not pose a threat to the beachhead established by the amphibious landings, and London made little attempt to establish this as a rationale for the attack. So long as Thompson could prosecute his advance across the northern route to Stanley – an operation feasible by foot and by helicopter – the garrison at Goose Green could be pinned in place, exerting very little influence on events beyond the narrow isthmus upon which the tiny settlements of Darwin and Goose Green sit. Nor did the Argentines expect such an attack, which accounts for the peculiar composition of the forces deployed there.

The Battle of Goose Green may, nevertheless, be seen as a pivotal event in the Falklands War. By boosting the morale of British forces and, conversely, fatally damaging that of the Argentines, its result had a profound effect on both sides for the remainder of this brief, yet decisive, campaign. Victory at Goose Green established British forces’ moral superiority over the defenders, a position which maintained the momentum of the ground offensive until the moment of Argentine surrender on the Falklands as a whole, little more than two weeks later.

The battle is also noteworthy for the degree to which the attackers operated outside of an all-arms context. When 2 Para struck on 28 May 1982, it did so largely unassisted, with the odds heavily against it. The battalion faced twice its numbers; the defenders occupied entrenched positions overlooking gently undulating, open ground, which they could sweep with rifle, machine-gun, mortar and artillery fire. The quality of 2 Para’s defending infantry bore no resemblance to their opponents’, but in light of 2 Para’s almost complete lack of support from other arms, it found itself largely dependent on its own resources to cope against poor odds. This was exacerbated by the lack of air support until the close of the battle; only the briefest naval support; the absence of most of the battalion’s heavy weapons until very late in the day; the dearth of armoured support; and grossly inadequate artillery support. The battalion was left to fight its way through enemy defences with rifle, grenade, machine gun, light anti-tank rockets and just two mortars. It took fourteen hours of close-quarter fighting to move 6km, some of it in darkness. This, by any standard, stands as a remarkable achievement.

The fact that Goose Green need never have been fought in order for British forces to attain their objective – defeating the main concentration of Argentine forces in and around Stanley – must not detract from the battle’s significance. Having made the decision to engage the Argentine garrison there, a great deal hinged on the outcome of the engagement – particularly if Britain had lost. The British were off to an auspicious start a week before Goose Green, when 3 Commando Brigade, of which 2 Para constituted but one of five battalions, had effected a successful lodgement and secured a bridgehead against possible counter-attack. But victory was by no means inevitable, for at the same time Royal Navy ships just offshore found themselves under intense air attack and suffered accordingly high losses: four ships destroyed and five seriously damaged in the week of the landings. To these losses were added a defeat inflicted against 2 Para. It is difficult to underestimate the negative repercussions that occurred back in Britain, both in Whitehall and amongst the public at large.

Quite apart from the serious impact on the morale of the armed forces in theatre, 2 Para’s repulse would result in a delayed offensive against Stanley, and time was in woefully short supply. Even if the simultaneous movement east of ground forces proceeded as planned (and there would have been a real prospect that, in the wake of defeat at Goose Green, this offensive would be cancelled altogether with forces digging in around Ajax Bay in a defensive posture) it was more than likely that the Argentines, elated by success at Goose Green, would launch a counter-thrust against the meagre British forces, 3 Para and 45 Commando Royal Marines, already en route to Mount Kent on foot. True, reinforcements were on their way to the Falklands in the form of 5 Infantry Brigade, but the delay forced upon Thompson, the land forces commander, would have derailed his timetable – a timetable utterly dependent upon taking Stanley before the full weight of winter brought a swift halt to any British offensive. Ships could not operate in rough seas; aircraft could not fly combat sorties, or helicopters ferry troops and supplies or evacuate the wounded; logistics would break down; and the troops, exposed to snow and freezing winds, would find themselves huddled in a ring around San Carlos and unable to move west or, worse still, obliged to disembark. This, in turn, would have forced the task force to Ascension Island 4,000 miles away or, more probably, home to lick its wounds and reflect on its failure to liberate the Falklands.

In the event, the Argentines surrendered on 14 June – with no time to spare for the task force. In this respect, the outcome of the fighting at Goose Green may rightly be seen to assume a position of vital importance to the war itself. 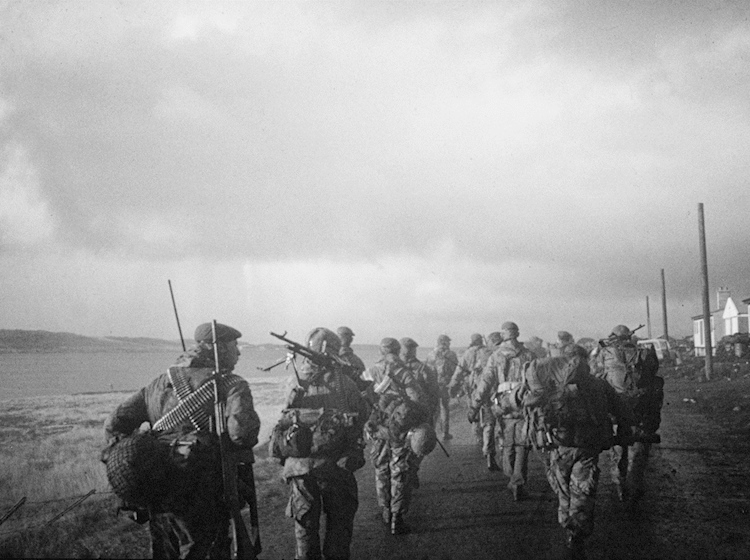 3 Para advances into Stanley in the wake of their victory at Mount Longdon. Note how they have replaced helmets with their coveted maroon berets.
Members of 3 Para’s anti-tank platoon, with machine-guns, move off Mount Longdon.
Map of the Battle for Darwin & Goose Green, 1982.
The battlefield of Goose Green, noteworthy for its almost complete lack of cover or ‘dead ground’. (Dr Stephen Hughes)
Marines from 42 Commando disarm Argentine prisoners at Stanley, 14 June. (Ted Nevill)
Map for the British Advance on Stanley, 27 May-14 June.
British paratroopers.
Argentine prisoners. In all, 13,000 fell into British hands during the course of the war.
The memorial to the fallen at Goose Green, erected within days of their liberation by local residents. It stands in a position seen from both Darwin and Goose Green.