The Battle of Clonmult: The IRA's worst defeat

On Sunday 20th February 1921, during the Irish War of Independence, the flying column of the 4th Battalion, First Cork Brigade was wiped out after being surprised in their base camp by a British Army patrol. The resulting battle of Clonmult was the IRA’s greatest loss of life ever in a single engagement against Crown Forces. The Crown Forces casualties for the battle were two military and three police wounded.

The column’s last engagement against Crown forces was on 29th of December 1920 when the column ambushed an RIC/Black and Tan foot patrol on the Main Street of Midleton in County Cork, an RIC constable and two Black and Tans were killed.

On the 6th of January 1921 the column moved into an unoccupied farmhouse near the village of Clonmult, eight kilometres north-east of Midleton. The column remained there until the day of the battle.

During the week prior to the battle, the Brigade commander tasked the column with attacking a train carrying military personnel at Cobh Junction. The attack was to take place on the 22nd of February. 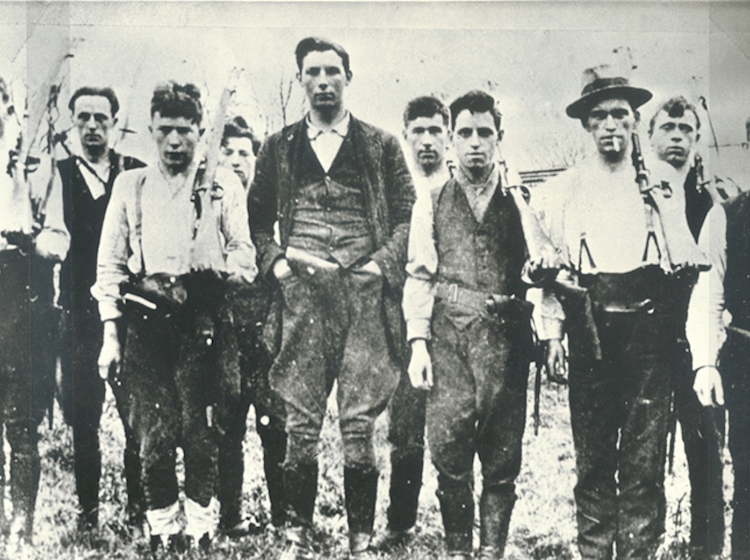 Members of the flying column of the 4th Battalion, 1st Cork Brigade. (Image from 'The Battle of Clonmult' by Tom O'Neill)

On the morning of the battle, Sunday 20th February 1921, the column commander and two senior officers departed from the farmhouse to carry out a reconnaissance of Cobh Junction. Jack O’Connell was left in command with orders to vacate the farmhouse that evening.

Around noon the British military in Victoria Barracks, Cork, received information that members of a column had been seen near Clonmult on the previous evening. At 2.15 pm a twenty-seven man mobile patrol under the command of Lt DF Hook MC was dispatched to investigate. The informer was also brought with them both as a guide and a hostage.

The patrol arrived at Rathorgan Cross Roads, near where the column was located, at approximately 3.00 pm and broke into three groups. Nine men remained to secure the vehicles. The other two foot patrols set off on their mission and carried out a search of the cottage belonging to the Carey family where they believed the column was based, however they found it empty. The informer had mistakenly concluded that this was where the column was located. Lt Hook decided to search a second house approximately one kilometre east, the correct location.

At about the same time Dick Hegarty and four young cyclists arrived at the farmhouse just prior to the commencement of the attack. This brought the total of IRA men to seventeen, in addition to the four cyclists. As they arrived they saw two members of the column collecting water at a nearby well.

The two foot patrols set off again and the ten man patrol under Lt AR Koe reached the farmhouse unchallenged, because the two sentries detailed to provide advance warning had left their positions and were in the farmhouse. The patrol approached the farmhouse from the south and was covering the only door, there was no back door. Those inside were now trapped. The soldiers opened fire on the men near the well, fatally wounding both. The second eight man patrol under Lt Hook quickly arrived. 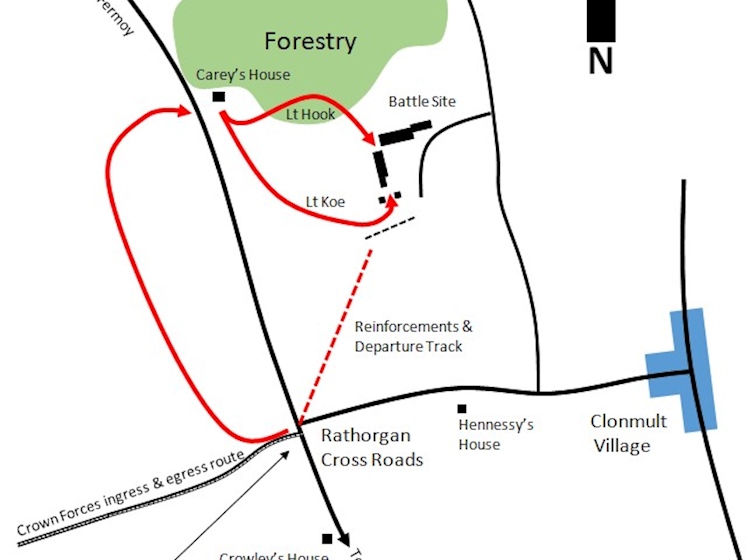 The Clonmult district, 20th February, 1921. (Image from 'The Battle of Clonmult' by Tom O'Neill)

Just as the first patrol arrived Jack O’Connell led a breakout from the farmhouse and reached a grove of trees and opened fire on a group of soldiers wounding the CSM.  Shortly afterwards four men ran from the house, three were killed. The fourth ran back into the house under a hail of bullets. The British Army did not have adequate numbers to capture the house so Lt Hook sent to Midleton for reinforcements.

Twenty-four Auxiliary Police with an RIC officer arrived at approximately 5.20 pm. They brought petrol and grenades with them. A British Army officer used the petrol to set fire to the thatch roof of the farmhouse. Those inside the farmhouse now had the choice of surrendering or being burned to death. The British officer in command guaranteed them their safety if they surrendered.

At approximately 6.00 pm twelve men surrendered and were directed to stand in front of a cow shed. Without warning the Auxiliaries opened fire and seven prisoners were shot dead and three wounded. The arrival of a British Army officer prevented the Auxiliaries from killing the wounded. The last three occupants of the farmhouse were delayed leaving the house and the delay saved their lives.

The battle was now over, twelve members of the column were dead, eight were captured and only one had escaped. The site was vacated and all were taken to Victoria Barracks. The twelve bodies were left at the battle site overnight. The army captured 13 rifles and carbines, 2 shot-guns, 12 revolvers, 198 rounds of ammunition, a Mills bomb and 6 bayonets belonging to the column. 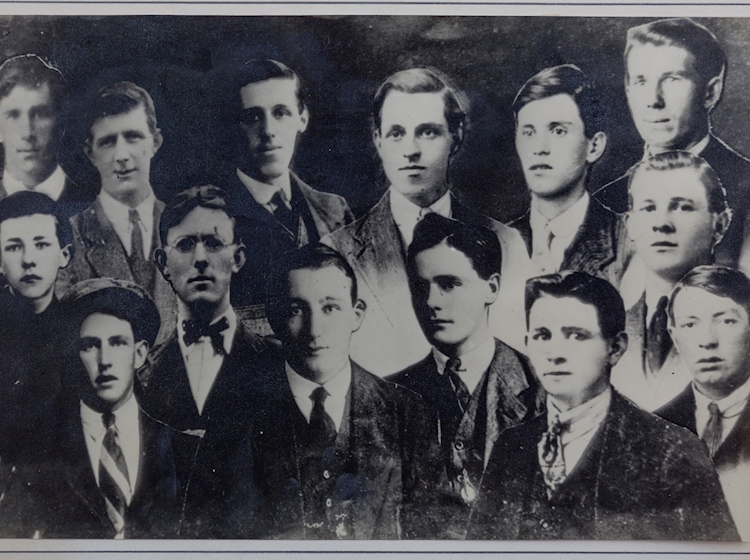 The bodies were removed by the Army the following morning and taken to Victoria Barracks. They were returned to their families on Wednesday night and were buried in their home towns on Cobh, Midleton and Ballymacoda.

During March 1921, seven of the eight prisoners were tried by Military Court in Victoria Barracks and all were found guilty. Three were sentenced to death. The remainder had proven that they were not members of the column and were sentenced to Penal Servitude for Life.

Two were executed in the Military Detention Barracks in Cork on the 28th of April. The third had his death sentence commuted to Penal Servitude for Life.

In June the eighth prisoner was tried and convicted and he too was sentenced to death. His appeal was taken to a higher level, this was successful and he was released shortly after the Truce on the 11th July 1921.

Because it was such a tragedy, for many years afterwards Clonmult was the one battle most spoke of by the Cork veterans of the War of Independence. In time however, the victories at Crossbarry and Kilmichael took the limelight. It was sweeter to speak of battles won than of a battle lost.

The Little Book of Blackrock