On Monday 11 May 1812, an unremarkable, anonymous man, just over 40 years of age, made his way to the Palace of Westminster, the seat of government in the United Kingdom of Great Britain and Ireland. No one could have known that on the inside left of his overcoat he had a specially designed, 9-inch-deep pocket in which was hidden a loaded pistol, and elsewhere on his person he carried a second pistol.

The man’s thin, angular face should have been familiar to some of those within the Houses of Parliament that day, as over the past few weeks he had become a frequent visitor there, sitting in the gallery of the House of Commons and carefully examining the various members of the government through his opera glasses. No one had taken any particular notice of this quiet man nor sensed the deadly intent in his presence. At 5.00 pm on this day he walked to the lobby leading to the House of Commons and sat near the fireplace.

The business of Parliament that evening was a committee of the whole house inquiring into the Orders in Council that had placed embargoes upon French trade but that, as a result of the discomfort they were causing at home, many now wanted repealed. The place was not very busy, with only around 60 of the 658 members present. The House of Commons was in committee examining witnesses to find out whether, and if so by how much, people were suffering as a result of the Orders in Council. Mr Spencer Perceval, the Tory who held the positions of Prime Minister, or First Lord of The Treasury, and also Chancellor of the Exchequer, had not yet arrived, a fact that annoyed Henry Brougham, the member who had first brought forward the motion that had led to this Inquiry. Brougham was one of those arguing for the repeal of the Orders. 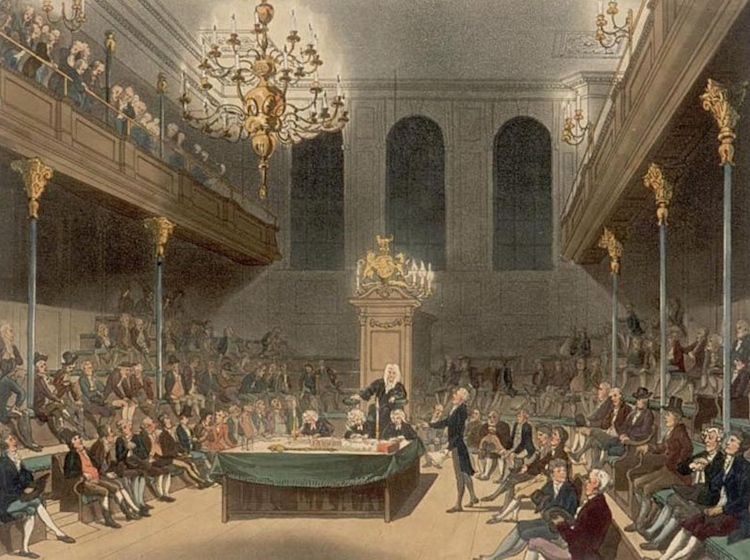 The House of Commons circa 1806

As he prepared to speak, he complained that this was the second occasion on which Mr Perceval had failed to arrive at the appointed time of 4.30 pm. He informed the Secretary of the Treasury that he would begin anyway and conclude his examination of the first witness, Mr Robert Hamilton, a potter from Stoke-on-Trent, who was arguing that the Orders in Council were ruining his trade and should be repealed.

Spencer Perceval had gained the respect of most of his colleagues at Westminster. ‘His character is completely established in the House of Commons; he has acquired an authority there beyond any minister in my recollection, except Mr Pitt,’ was what one future Prime Minister, Liverpool, wrote of him to another, Wellington. ‘The country can never be under the direction of a more honourable and virtuous man,’ wrote another contemporary.

By five o’clock, those members present in the House of Commons were listening to the Member of Parliament for Grinstead, Mr James Stephen, cross-examining the witness, Mr Hamilton. In the House of Lords the peers were finishing off other business before also proceeding to discuss the Orders in Council. By now the Prime Minister was on his way. It was a fine, sunny, May evening, and he had decided to dismiss his carriage and travel
on foot from No. 10 Downing Street to the Palace of Westminster. As he walked along Parliament Street he was met by a messenger from the Secretary of the Treasury reminding him of the Inquiry proceeding in the House of Commons and informing him of Mr Brougham’s complaint about his late arrival. On being told this, the Prime Minister quickened his walking pace. Around 5.15 pm he arrived at the Houses of Parliament. 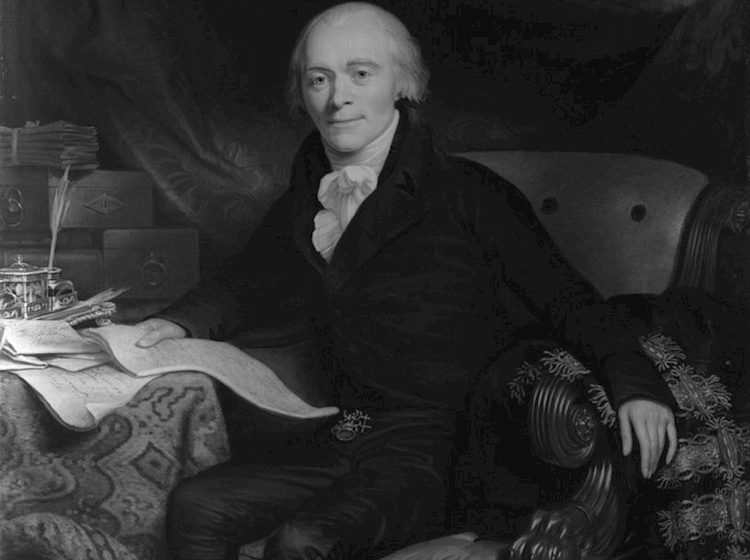 He entered the building and walked down the corridor towards the lobby entrance to the House of Commons. He handed his coat to the officer positioned outside the doors to the lobby. William Jerdan, a journalist, was just about to enter the lobby. He pushed the right-hand panel of the high folding doors, knowing that the left-hand panel was usually locked in place. Behind him he noticed the Prime Minister approaching with his ‘light and
lithesome step’. He greeted him and received a typically gracious greeting and smile in reply. Jerdan stood aside to allow Mr Perceval to enter.

As Perceval entered the lobby a number of people were gathered around. Most turned to look at him as he came through the doorway. No one noticed as the quiet man stood up from his place beside the fireplace and removed the concealed pistol from his inner pocket. Neither did they notice as he walked calmly towards the Prime Minister. When he was close enough, he fired his pistol directly at Mr Perceval’s chest. There was a moment of shocked silence around the lobby in response to the bright flash, the intense sound and the odour of gun powder. The Prime Minister staggered forward before falling to the ground, calling out as he did: ‘I am murdered!’

William Smith, the MP for Norwich, who had not seen the Prime Minister enter, turned around on hearing the sound of the shot and, at first, did not know who this man was who had fallen face down on the ground in front of him. It was only when he and Mr Francis Phillips, from Longsight Hall near Manchester, turned the victim over onto his back that Smith recognised the face of the Prime Minister.

Those inside the chamber of the House of Commons had also heard the loud shot ring out, followed by the sound of a disturbance. Some members left the chamber immediately and ran in the direction of the commotion, while others attempted to continue stoically with their business. Eventually the shocking news began to filter back to the chamber that someone had been shot. The confusion mounted until there was no option but to suspend
the business of the House.

The sound of the shot also disturbed the business of the House of Lords, situated on the other side of the lobby. After the shot, the Peers heard a chilling shout come from outside the chamber: ‘Mr Perceval is shot.’ An official ran in to inform them of what had happened. Many of them crowded around the man to listen to his account. On hearing the news, everyone but Lord Chancellor Eldon and three bishops rushed out into the lobby to
see for themselves.

Mr Smith and Mr Phillips, assisted by a number of others, carried Mr Perceval into the Speaker’s apartments, where they placed him in a sitting position on a table, supporting him on either side. He had not uttered a single word since falling on the floor of the lobby, and the only noises to have emanated from him since had been ‘a few convulsive sobs’. After a short time Mr Smith, on failing to find any perceptible sign of a pulse, came to the terrible conclusion that the Prime Minister was dead.

Mr William Lynn, a surgeon from No. 15 Great George Street, arrived on the scene and soon confirmed that Smith was correct. The surgeon noted that there was blood all over the Prime Minister’s coat and white waistcoat. He examined the body and found ‘a wound of skin about over the fourth rib on the left side near the breastbone’. It was obvious that this was where the large pistol ball had entered. He probed an instrument into the wound
and found that ‘it had passed obliquely downwards and inwards in the direction of the heart’.6 The wound was more than 3 inches deep, and he was in no doubt but that it had caused Mr Perceval’s death. The Prime Minister was not yet 50 years of age and left behind his wife, Jane, and twelve children.

Extracted from The Assassination of the Prime Minister by David C. Hanrahan

Learn more about the Georgian era