Anyone who is interested in genealogy as a serious pursuit will eventually need to tackle the abundance of records that either add interesting context to a family history, or extend research back to the sixteenth century or earlier.

This will inevitably mean addressing the documents that are available to browse online, but have not been indexed, or are only available to view in person at local archives or record offices.

Church court records, for example, are an almost untapped resource on moral offences such as adultery, cruelty, infidelity and defamation. Coroners' records often give a wealth of detail concerning the circumstances of unnatural and sudden deaths. Manor court rolls contain a treasure trove of information on tenure, conveyancing, deathbed transfers, marriage and illegitimacy, and crime and punishment for two centuries before parish registers begin in 1538.

There is plenty of professional help out there, but it is a good deal cheaper, and far more satisfying, to 'do it yourself'. There is nothing inherently difficult about reading old handwriting, but it requires a good deal of patient and guided practice to develop the range of skills needed for a reasonable level of competence.

1. Get to know the different letter forms used over time

Handwriting changed over time, and different scripts were used in different records. Fifteenth century 'secretary' hand was unlike Tudor secretary, and late sixteenth century secretary was different from the 'mixed' hands of the later seventeenth century. The handwriting in the records of the central law courts was nothing like the handwriting in parish registers of the same date. Indeed, some letter forms, particularly in legal documents, are so unlike modern letters that even in the eighteenth century they are almost impossible to read. Without some training, it would be difficult to even guess at the following: 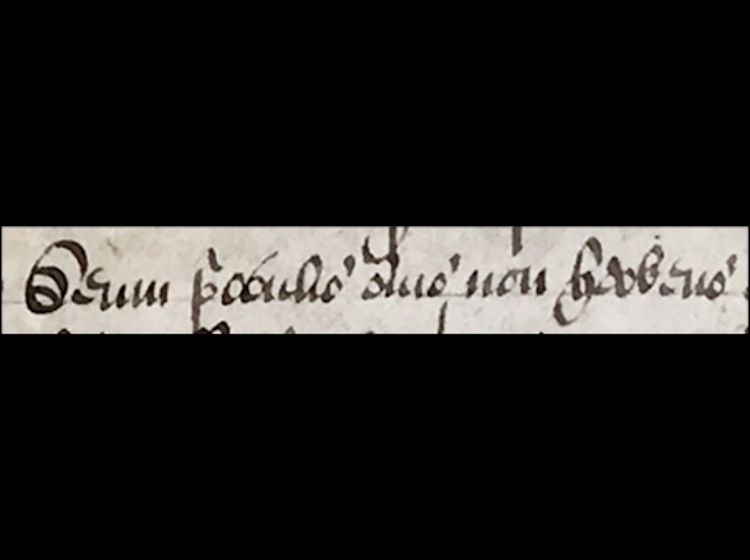 Tables of alphabets covering the three main classes of script, secretary, italic and court, and showing how the letters changed over time, are a great help when approaching documents from an unfamiliar source or era.

2. Familiarize yourself with the system of symbols and abbreviations used

Parchment was a costly item, and a system of abbreviations was used to save on space. Some abbreviations are still with us today: Mr, Mrs, Dr, £.

There are three very common abbreviations in these two lines from a 1614 rental: 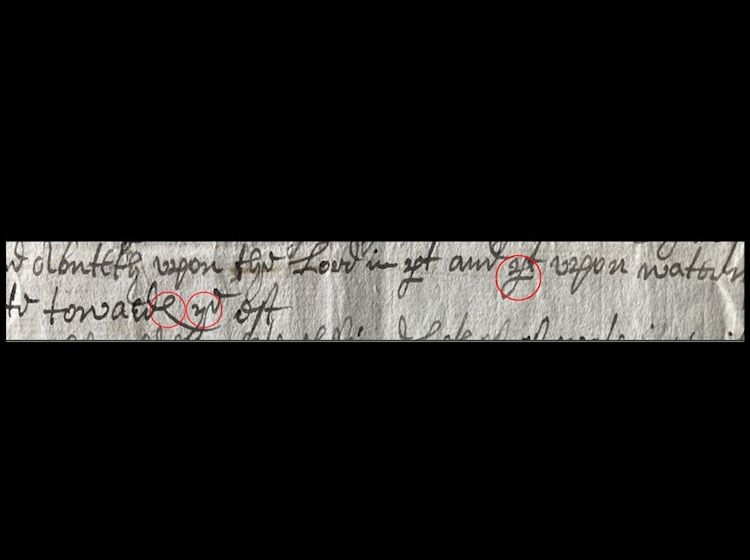 The modification of the letter ‘p’, meaning ‘par’; the ‘es’ symbol; and the saxon ‘thorn’ for the letters ‘th’: ‘And Abuteth upon the Lord in part and part upon watering pite towardes the est’. Again, tables of the symbols and abbreviations used in records in both English and Latin are helpful.

Like any skill, you learn best by doing. Tables of alphabets and symbols are useful aids, but the application of theoretical knowledge is less important than a good deal of patient practice. For this, you need reliable transcripts of original documents to check the accuracy of your own work. Parish registers transcribed towards the end of the nineteenth century are often of an exceptionally high quality. Spend a few hours transcribing the sixteenth century registers of St Peter Cornhill or St Dionis Backchurch in the City of London, available to browse Ancestry, then compare your efforts with transcripts, which may be accessed without charge from the website of The Harleian Society. You will have a good grasp of Tudor secretary hand within a few hours. However:

4. Never rely on online indexes in your research

If you are looking to extend your family history into the sixteenth century, expect to do all the searching yourself. At least half of all entries - and sometimes every single entry - in the online indexes of sixteenth century sources on the major genealogy websites are mistranscribed. In the online index for the two City of London parishes mentioned above we find, to name just a handful of errors, Sdle (for Idle), Rones (for Spoure), Tuderson (for Anderson), Uslengyng (for Volentyng), Tylys Sozeser (for Gylys Forester), and Spevey Cockingyam (for Steven Bockingham). A good transcript is a great aid to the researcher; a poor transcript is worse than useless, as you may well assume that the name you are looking for is not there. It follows from this, that if you are transcribing a document, you should never 'force' a word to fit what you think it should say. There are likely to be plenty of unfamiliar words, particularly in sources such as wills and inventories, and a glossary of words and terms used in farming and probate records will be invaluable.

5. Don’t be afraid of Latin

You can't avoid Latin if you are going to extend your research beyond the eighteenth century. Many sources, such as parish registers, or the probate clauses of wills, need only a basic level of Latin, which can be easily picked up with the help of a basic Latin textbook. Professional help may be required to translate complicated legal records, but with adequate palaeographical skills, you will be able to identify relevant names and places in any document, which will cut down considerably on paid time. In this late seventeenth century bond, all the useful details can be extracted, without any need to translate the whole document:

The name, place, county and occupation of the person entering into the bond are all to be found in the first two lines (Samuel Clemson, of Walsall, Staffordshire, baker) and the date is found in the bottom four lines (7 September 1698)

Find out more about genealogy