Spying in Berlin during the Cold War

Some younger readers may pigeon-hole the Cold War that ended over a quarter of a century ago with those other events of the twentieth century like the First and Second World Wars. Yet, for those of us who were children during the latter, with memories of German bombers overhead, wearing gas masks in the classroom and our fathers or our friends’ fathers dying in places we’d never heard of, the Cold War is still a vivid experience.

For most British men of that generation – 2.3 million were conscripted for military service – there are memories of square-bashing and learning to handle lethal weapons while they were taught to serve as cannon fodder in the event that the Cold War went hot. For just over 4,000 of us conscripts there was closer contact with ‘the enemy’: we spied on them. After intensive training in Russian or another foreign language and learning armed forces’ jargon in that tongue, we were moved to the front lines between NATO countries and the Warsaw bloc, controlled from Moscow. Some also went east to snoop on Chinese radio traffic. National Service linguists in bell-bottom trousers, designated ‘coders, special’, listened to Soviet navy ships’ transmissions; army linguists spent months scribbling down tank and other traffic in Central Europe; the majority of linguists, who wore grey-blue RAF uniform, logged in real time the terse, distorted bursts of VHF communication from Soviet or other Warsaw Pact aircraft in the skies over Eastern Europe.

Why? So that analysts back in Britain could constantly update the Warsaw Pact Order of Battle as an indicator of Soviet intentions: were they about to invade or was all quiet on the Eastern Front?

The whole vast system of British linguist training in the difficult language of Pushkin and Chekhov – there are no definite or indefinite articles and every verb has two aspects which can be very different, with idti and khodit both meaning ‘to go’, as do a host of other words – was involved and very complex. Our instructors at the Top Secret Joint Services School for Linguists (JSSL) included Russian émigrés who had escaped during the October Revolution or in the Second World War, as well as Balts, Czechs, Poles and other Eastern Europeans – all with excellent Russian. Many of them had harrowing personal histories, for which their young students showed curiosity but no sympathy. There was no political indoctrination; indeed one instructor, who had been a Soviet general, took pleasure in telling everyone that if it came to a shooting war we stood no chance because the Red Army were the best soldiers in the world. For us students, who had not chosen to put on uniform, the work at JSSL was intellectually demanding but we were aware that we had probably the most interesting jobs of all the National Service conscripts.

My new book, The Solitary Spy, paints a much more detailed picture of the linguist training system, and also draws the picture of our life on Göring’s luxury airbase at Gatow in the British sector of Berlin when much the city was still a field of rubble from the RAF and United States Army Air Force (USAAF) bombing in the Second World War. Called ‘the divided city’, it had been carved up into the three Western sectors and the larger Soviet sector, all surrounded by the gloom and terror that reigned in the ultra-Stalinist so-called German Democratic Republic. Day and night, we logged Warsaw pact aviation traffic, went sailing on the Havel Lake, ate like princes in the Foyer du Garnison in the French sector and explored the other Western sectors. It was quite the life!

Some of us also unwisely explored the more dangerous Soviet sector, which leads me to just how I became the eponymous spy: one dark night I was found on the wrong side of the border by men with loaded rifles and locked up in solitary confinement in a Stasi Untersuchungsgefängnis or interrogation prison. There I was grilled for weeks by Stasi and KGB personnel, who tried to force out of me details of the important work I had been doing in Gatow … The full details of this and more goings on in my Cold War life can be found in The Solitary Spy.

Douglas Boyd (aged 19) in August 1958 with Soviet personnel at Treptow Memorial Park, Berlin.
Many women and children walked hundreds of miles to return to the ruined city of Berlin. 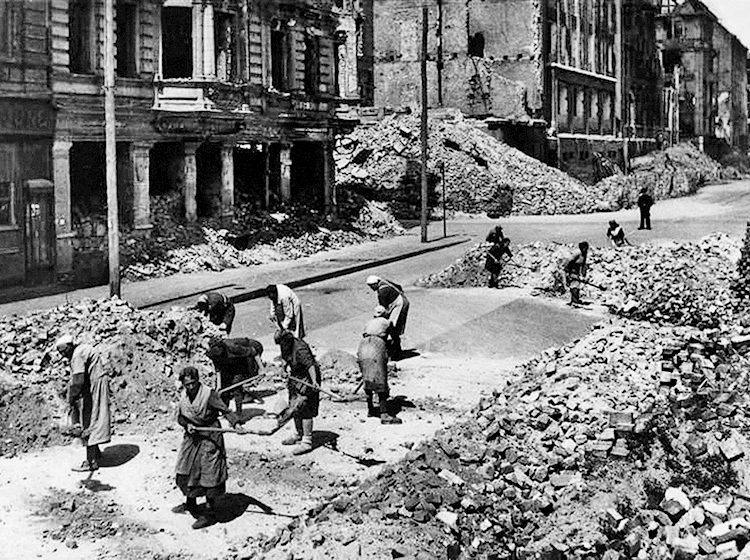