Shelter at home in the Second World War

In the Second World War, the people of Britain found their homes in the front line. Cities became targets for bombs, and just as houses and flats were wrecked by fire and high explosive, so too were families broken, hopes dashed, loves lost. For people under daily and nightly stress, home became a refuge and a rallying point; their homes were what they were fighting to protect.

At home everyone got used to ‘going without’ and the domestic battlefield was littered with the munitions of a new kind of war – air-raid shelters, blackout curtains, ration books, gas masks and stirrup pumps – so that when the time came and the sirens sounded their whining rise and fall, people could head for shelter.

Preparations for an air bombardment of Britain had been made before war began in the expectation that ‘total war’ would target civilians as well as those armed to fight. Everyone (even babies) was issued with a rubber gas mask to combat the expected use of poisoned gas, employed to deadly effect against troops in the First World War. Air-raid shelters were distributed free to poor families. Sirens would give people warning of approaching bombers and, later, sound the ‘all clear’. Night-time blackout was ordered in cities from 1 September 1939, the day on which mass evacuation began.

At first people were bombarded by the Ministry of Information: told how to dig trenches; how to place sandbags to shield windows; how to douse fires with a stirrup pump; how to dispose of incendiary bombs with a scoop and sand-bucket. Shelter-trenches in public spaces were for use only by ‘people passing through the streets’. Those who could, should go home – provided they could do so within five minutes. Others should shelter at their workplace.

For months nothing much happened. This was the ‘Phoney War’: no bombs fell, cinemas reopened and life went on more or less as usual. In the spring and summer of 1940, however, war became real: the Nazis overran Norway, Denmark and the Low Countries; after Dunkirk came the fall of France, the threat of invasion, the Battle of Britain and the start of the Blitz. Air raids on Britain’s cities began in September 1940. In London at the peak of the Blitz about 150,000 people sheltered nightly in Underground stations. Night after night cities across the country became targets.

The most widely used home shelter was the Anderson. Officially called the ‘sectional steel shelter’, it was universally referred to as ‘the Anderson’, after Sir John Anderson, the architect of air-raid protection before the war and the first wartime Home Secretary. Over two million Anderson shelters were issued to households; they cost £7, but were supplied free of charge to people earning less than £5 a week in danger areas.

As the official name implied, this shelter was delivered in sections and had to be put up by the householder. Measuring 6 ½by 4 ½ feet (2 x 1.4m), the corrugated-steel arched shelter was partly buried in a hole up to 4 feet (1.2m) deep, then covered with soil. It was remarkably bomb-proof (unless suffering a direct hit) but was incredibly cramped, draughty and tended to flood after rain, which made sheltering a chilly experience – even with flasks of tea, blankets and hot-water bottles.

Andersons were the perfect shelter for the suburbs: they needed a back garden, which many inter-city dwellers did not possess, and the standard shelter could hold four people, six at a pinch, easily accommodating the average suburban family. Delivery of the Anderson shelters began in February 1939 and by mid-1940 almost 2.5 million had been supplied. Later a larger version was designed that could hold up to 12 people.

In September 1940 the Dig for Victory campaign encouraged civilians to grow their own food in times of harsh rationing and in October the Minister of Agriculture urged every householder to convert part of his or her garden to vegetable growing.
By this point many wartime gardens now featured an Anderson shelter, an area ripe for horticulture. Although some recommended it be turned into a rockery, it most popularly used for growing marrows. Despite being not so comfortable
for people, the dark, damp atmosphere inside the shelter was ideal for mushrooms and rhubarb. 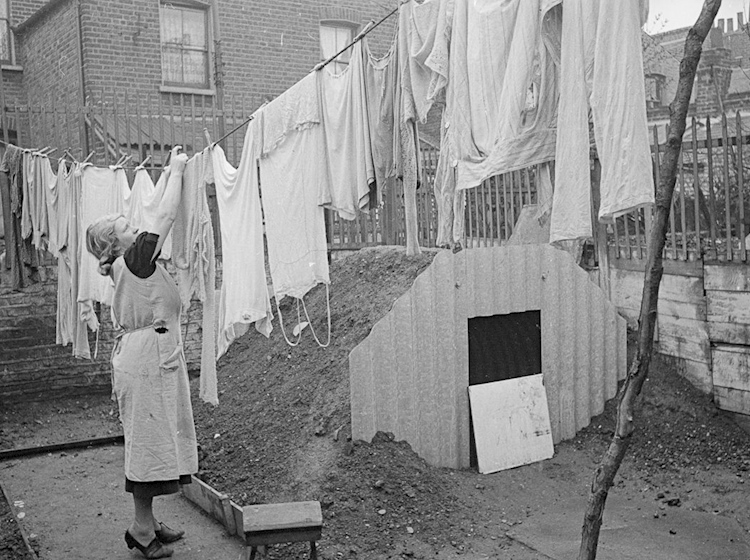 Fearing enemy planes would drop poison gas as well as high explosive, the government advised people to turn one room into a gas-proof ‘refuge room’, and issued 38 million gas masks. Women’s League of Health and Beauty members cavorted in gas masks to encourage their use, but most people hated wearing them. The masks had to be kept cool and dry, so shops tried to sell containers ‘to protect your gas mask against bad weather’. As the fear as gas attack receded, many masks were left at home to become post-war mementos.

The Morrison shelter for indoor use appeared in 1941. It was basically a steel cage, holding four people at a squeeze. Its flat top was good for table tennis and it made a fine den for children’s games, but it was a lifesaver too. Officially called the ‘table shelter’ it was soon nicknamed after Herbert Morrison, the Minister of Home Defence.

A low, steel cage, 6 feet 6 inches by 4 feet and 2 feet 9 inches high, its top was of sheet metal and its sides covered with wire mesh. It was designed to hold two adults and one child (or two very small children), although a double-decker version was introduced later. When not in use, the mesh sides could be swung inwards and, covered by a cloth, it would
double up as a table.

As with the Anderson, Morrison shelters were free to anyone earning less than £350 per annum, or could be bought for £7 by
anyone else, and were delivered in pieces to be assembled by the householder. People who were not able to construct the shelter for themselves – those who were frail or sick – could contact youth groups like the Scouts or Boys’ Brigade to help. One of the first Morrisons was installed at No. 10 Downing Street.

Morrisons were not used exclusively by those who had no garden – many in the suburbs bought, or were provided with, them. Some even had both, a Morrison and an Anderson shelter.

In spite of all these variations, many people never had their own shelters, choosing either to use the public shelters, or to
take refuge in the cupboard under the stairs or even under a table. Although cellars were the next safest place at home, many people feared being buried under rubble if the house was hit.