Salsette: 100 years under the sea

In September 1837 the wooden paddle steamer Don Juan, of the company later known simply as ‘P&O’, sailed on the inaugural voyage of the mail service contract to the Iberian Peninsula. Up until the major restructuring of the company in 1971 P&O had owned nearly five hundred vessels, of which 78 ended their careers at the bottom of the sea. Over half the losses were a direct consequence of the First and Second World Wars when the Merchant Navy was decimated by the actions of German U-boats. One such vessel to be lost was the express liner Salsette, which was torpedoed 100 years ago on 20 July 1917.

Salsette after being torpedoed (painting by Stuart Williamson)

Although a modest-sized vessel in comparison to P&O’s contemporary 10,000-ton passenger liners, the Salsette was the fastest ship in the fleet and visually stunning, possessing sweeping lines, a graceful counter stern and straight stem. The hull was painted white and the funnels buff yellow. The Salsette operated primarily on the P&O express service from Aden to Bombay.

After the outbreak of the First World War the Salsette continued to operate regular passenger services. At the end of 1916 the ship made the first of two voyages on the Australia run, where she was required as a replacement for the Arabia, which had been torpedoed on 6 November. In between voyages to Australia the Salsette remained on the Bombay–Aden express service until being recalled to England once more.

On 19 July 1917 the Salsette sailed from London under the command of Captain Albert Borlase Armitage, bound for Bombay, with passengers, general cargo and pay for the troops in Egypt. After rounding Portland Bill on the Dorset coast the following day, the ship was struck by a torpedo fired from UB 40. Captain Armitage was the last to leave his sinking ship and witnessed the vessel's final moments from his lifeboat, seeing the ship turn and nosedive fifty minutes after the fateful torpedo had struck. All the passengers got off safely but 15 lascar engine room crew lost their lives: 10 firemen, 4 trimmers and a tindal. All the survivors were picked up after twenty minutes and landed in Weymouth. 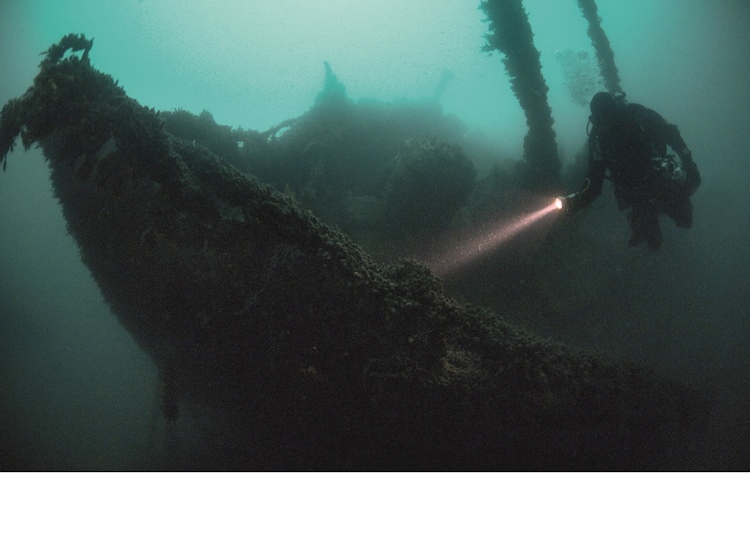 The wreck of the Salsette was found and positively identified by scuba divers in the 1970s. Since that time it has become one of the most popular wreck dives in the UK and was voted number one in Diver magazines ‘100 Best UK Wreck Dives’.

The Salsette rests on her port side at 45 degrees on a flat, sandy seabed in a maximum depth of 50m. Although much of the upper-deck superstructure has collapsed, the hull is still largely intact. As well as divers the Salsette also attracts a lot of fish life, which includes shoals of pouting, large pollock and conger eels.

The Salsette carried a defensive 4.7in gun which is still in place at the stern. The starboard propeller shaft is exposed but the bronze propeller has been salvaged. Some of the easily recognizable features on the wreck include wooden decking, bollards, cargo cranes, winches, storage tanks and even a bathtub. At the bow the anchor chains file down through the hawse pipes to the large anchors which both still sit snugly in place. 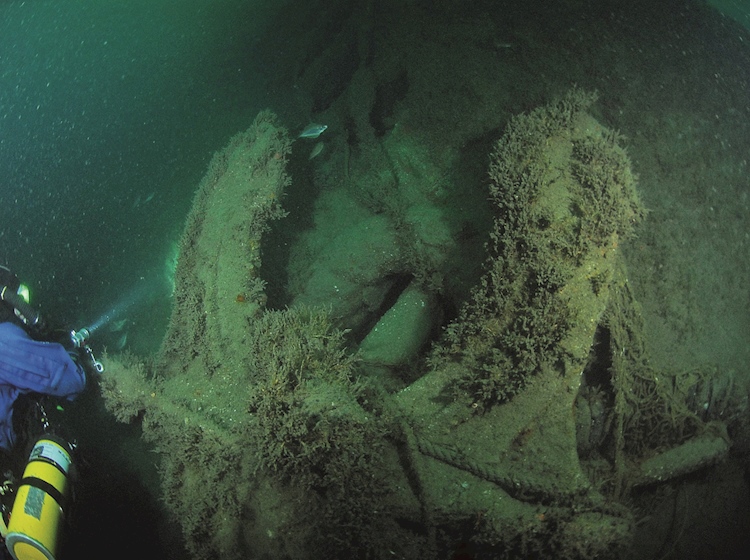 Being a well-appointed luxury liner the wreck has been a treasure trove of interesting and valuable artefacts. Some of the items recovered over the years have included the bell and all manner of brass fixtures and fittings such as portholes, bridge equipment, engine room gauges, fans and ornamental bench ends. More delicate items have included P&O crockery and etched water decanters. P&O china chamber pots have been a particularly prized find.

Pewter ram's head from the wreck

The wreck of the Salsette presents divers with a unique opportunity to explore the underwater heritage of one of Britain's most famous shipping lines and ensures that the story of this beautiful liner, along with her passengers and crew will never be forgotten.