Born in Essex in 1274, Robert the Bruce was a French-speaking Anglo-Norman with enormous estates in England. He was the rightful heir to Alexander III, but Edward I appointed John Balliol as king in his stead. He betrayed William Wallace at the battle of Falkirk and scored one victory over Edward II on a boggy hillside at Bannockburn with his band of ill-equipped peasants then died of leprosy in 1327. That’s what most people know about Robert the Bruce, and none of it is true.

Robert was born in 1274 and he did die in 1327, but the rest is what historiographers define as ‘codswallop’. Robert’s mother was the Countess of Carrick – a rich Celtic potentate and his grandmother was the daughter of King David I of Scotland – to describe him as an ‘Anglo–Norman’ is like describing the latest royal baby as a ‘German-Greek’. He was most likely born at his mother’s castle of Turnberry in Ayrshire and it is difficult to believe that he did not grow up speaking the languages of the areas in which he was raised; Gaelic-speaking Ayrshire and Scots-speaking Annandale. As an educated man he would almost certainly have been able to read French and possibly Latin, but whether he could actually speak either of those is a very different matter. The Bruce family did own some valuable property in England, but not enough to make them politically significant people in England; Robert was just one baron among hundreds.

When Alexander III died it was not absolutely clear who had the better claim to his throne, but since Robert was only 12 years old and both his father and grandfather were still alive, it certainly was not him. The lords and communities of Scotland decided that there should be a court of enquiry and Edward I was invited to be the chairman; he was not invited to make the decision, just to administer the process. A jury of 104 auditors was appointed to examine the claim of a total of 13 candidates, though in fact there were only two serious possibilities; John Balliol and Robert Bruce – the grandfather of the man who would eventually become king. Balliol’s claim was undoubtedly the better of the two and the jury chose him as Alexander’s successor. The notion that Edward chose Balliol because he would be more malleable is simply untrue.

John Balliol as depicted in the 1562 Forman Armorial
King Edward I of England, the Hammer of the Scots

In due course Edward chose to force Balliol into a war that would enable him to annexe Scotland and Robert certainly changed sides at least twice - he was not alone in this and he had little choice if he was to protect his inheritance as Earl of Carrick and Lord of Annandale. He never betrayed Wallace, but he always had his eye on the possibility that he could become king in place of John Balliol who, by 1303, had abandoned any hope of being restored.

Robert’s road to the throne depended on military success so long as the Balliol line survived and his first campaign was disastrous – within months of declaring his kingship in 1306 he had been defeated twice in battle and driven into hiding. A new campaign the following year started badly, but by 1308 he was in the ascendant. It was a long struggle – he had to fight two civil wars against domestic opposition as well as dislodge the English occupation, but by 1314 only a handful of castles still held out against him.

The most important of these was Stirling. Robert’s brother had laid siege to the castle at Lent and agreed a pact with the commander of the garrison, Sir Philip Mowbray. If the castle was not relieved by midsummer it would be surrendered and the garrison would leave with life, limb and property intact. Mowbray was well aware that Edward II was already committed to a major campaign in Scotland that summer so he was confident that relief would be achieved. Accordingly, Edward raised a great army and headed north only to find his way blocked by the Scots just a few miles short of his first objective; Stirling.

Robert had avoided a major battle against other English armies in the past, but this time he was prepared not just to accept a battle, but to force one. Edward’s initial thrusts toward Stirling were thrown back with some loss and the two leading elements rejoined the rest of the English army on the plain. The site was well-chosen in the sense that it was good ground and with a degree of night protection on three sides from the River Forth to the east and two streams – the Pelstream and the Bannock - to the north and south.

Edward and his lieutenants had extensive military experience, much of it gained on campaigns in Scotland and none of them had any concern that the site might become a trap if the Scots were to attack, in fact their chief concern was that the Scots would slip away in the night and avoid a major battle as they had in the past.

They were quite wrong. In the early dawn Robert’s army moved down from high ground from which they could safely observe their enemy, deployed across the space between the Pelstream and the Bannock and pressed forward quickly and fiercely. The ensuing battle was a hard-fought affair, but did not last long. The Scots were heavily out-numbered, but they were well-trained, well-equipped, well-motivated and well-led. Forced to leave the battlefield, Edward headed to Stirling Castle where Mowbray informed him that although, by the terms of his agreement with the Scots, the castle had been relieved by the arrival of an English army within three miles, in practice the siege would be imposed again immediately and was bound to fall. Edward made a swift exit and was fortunate not to be captured.

A statue of Robert the Bruce in front of Marischal College, Aberdeen

Robert was now master of his kingdom, but the war would drag on for more than a decade before he managed to force a treaty that recognised his kingship and Scotland’s independence. He got little opportunity to enjoy the fruits of his labours; he died in 1327, but not of leprosy; that was no more than a propaganda claim by English chroniclers.

So there we have it; almost everything that almost everyone thinks they know about Robert I is simply not true. 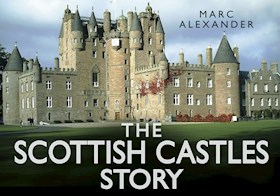 The Knights Templar and Scotland