Roald Amundsen: The first to reach the South Pole

On 14 December 1911, the Norwegian explorer Roald Amundsen (who had already led the first expedition to traverse the North West Passage, and would go on to lead the first successful attempt to cross the Arctic by air) and his team became the first human beings to reach the South Pole, just over a month before Robert Falcon Scott’s ill-fated Terra Nova expedition.

Five men, four sledges and fifty-two dogs, set off towards the south on 20 October 1911. Only a small number of dogs would make it all the way to the Pole. But what about the men? Johansen believed there were too few draught animals for such a large party and predicted that Hanssen would be the sole member to accompany the Governor all the way. ‘I won‘t be surprised if we see Hassel and Bjaaland here in a couple of months. Maybe Wisting too,’ he wrote when they left. 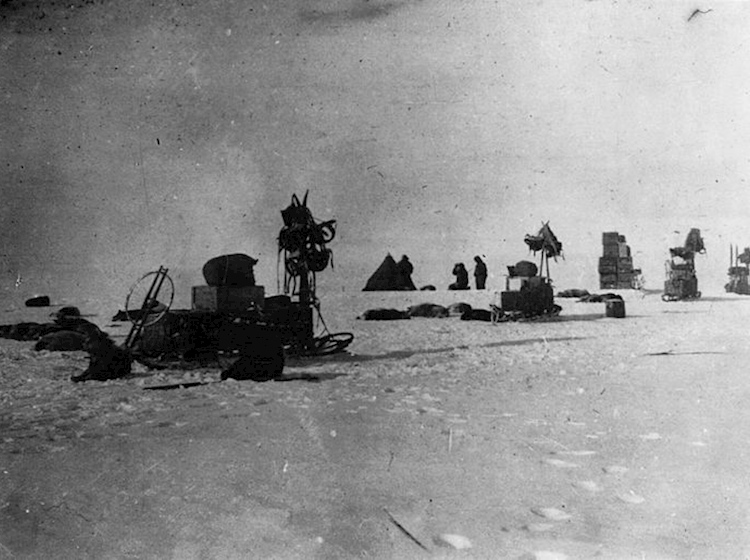 The route to the South Pole can be divided into three phases. Initially there is the relatively flat barrier, from about 79° to 85° South. The critical phase follows next: the ascent and crossing of what Amundsen would call Queen Maud’s Mountain Range with subsequent difficult glacier sections from 85° to 87° South. Finally, all the way to 90° South, lies the South Pole plateau, flat but at extreme altitude. Roald Amundsen’s only fixed point for the whole voyage into the unknown were his studies of Shackleton’s journey through similar terrain further to the west, the route of which Captain Scott would make use.

Roald Amundsen’s forte, compared with the English expedition, was that he knew his metier through and through. Dogs, skis, sledges – all of them tried and tested by Nansen, Sverdrup and himself. The same applied to the problems of cold and nutrition. Peary, Cook and Astrup; their experiences were solid weight at Amundsen’s disposal. Only two things could prevent him from reaching the South Pole: the unpredictability of the terrain and the human factor.

As Johansen had from the very start, Bjaaland and Hassel came to entertain deep scepticism about Amundsen’s leadership. They were critical of many of of his decisions, among others of his estimates of rations for dogs as well as humans. But above all it is the Governor’s personality which they disliked.

On 19 November, in the middle of the difficult ascent, some sort of discussion developed into bickering between Amundsen and the stubborn farmer from Telemark. Hassel in his diary described this second rupture as ‘a small settling of accounts’. Just like Johansen a month earlier, Bjaaland was asked to leave. But as the man from Morgedal was no navigator Sverre Hassel was directed to accompany his comrade back to Framheim; they were to return as soon as they had reached the summit. Johansen’s predictions were about to come true.

The medal winner from Morgedal and Holmenkollen then made the only move which could possibly have persuaded Amundsen to change his mind. He ‘ate humble pie and pleaded with the Captain to reverse his decision, which Amundsen then did. Hwever, he reiterated that he would not stand being contradicted.’

The microscopic drama – the man from Morgedal on his knees in front of the Governor – was played out against a backdrop of enormous, as yet undiscovered, mountain formations. In his diary Roald Amundsen was content to commit the scenery to paper. Humans dwindled and became unimportant among these unseen mountain tops and dizzy peaks. The journey continued the next day.

Once they reached the top, twenty-four dogs were slaughtered. Amundsen himself did not partake in the bloodbath. Wisting was cook. Animals and humans gorged themselves on dog cutlets and a large depot was laid out. The place was christened ‘The Butcher’.

About ten days later the expedition found itself in difficult crevasse-ridden terrain, ‘The Devil’s Ballroom’. The Governor was irritable in the extreme. Crampons had been left behind at ‘The Butcher’ and Amundsen feared they might have to retrace their steps and retrieve them. ‘A thousand thoughts rushed through my mind,’ he wrote in his diary. ‘The Pole lost maybe for such a trifle.’

The two weeks it would have taken to recover the crampons might decide the race in favour of the British. That explained some of the Governor’s bad moods. What to the others were practical details were to the Governor the be all and end all. The South Pole plateau lies between 2,000 and 3,000 metres above sea level; Roald Amundsen’s drop would not have been much less. From the very moment he altered course from north to south the expedition had been without a line of retreat. However well it was all planned, only the South Pole could save Roald Amundsen, and he knew it.

Sverre Hassel protrayed the Governor as ‘distant and cantankerous’; Hansen and Wisting were ‘his two buddy-boys’. Time and again clashes were followed by sulking. ‘One would think the man has a screw loose. He has many times in the last few days actually initiated quarrels, an extraordinary stand to take for a Governor and leader for whom peace and good camaraderie should be the main target’. Thus wrote Hassel two days before they reached the Pole. Amundsen’s nerves were stretched to breaking point. At any time they might see signs of the British.

On 14 December they reach the point, in Amundsen’s words: ‘An extremely flat snow plateau.’ It was not easy to find the invisible place on which to place the flag. Roald Amundsen christened the area Haakon VII Plateau and sent up a prayer to heaven: ‘Thanks be to God!’

He called the camp Polheim – Polar Home – a misnomer for he had found a home where it would be impossible to live. For the first time during the journey they smoked. To everyone’ astonishment Amundsen brought out a pipe. The others whittled bamboo smoking gadgets by cutting tips off their ski-poles. The man from Morgedal alone was equal to the historic occasion; he fished out a silver case and proffered cigars all around.

When all five had helped themselves three cigars remained – one for Stubberud, one for Prestud and one for Johansen. They gazed at them before handing the matches round. The man from Telemark uttered a few well-chosen words in his beautiful, regional lilt, and presented Amundsen with the case. Johansen too had once held a speech for the Governor. It does not go without saying that the tip of Olav Bjaaland’s cigar glowed here at the uttermost point of the world.