Reminiscences of the Queen’s Coronation

The 1950s saw a major shift in the lifestyles of many in Britain. The austerity that had dogged the 1940s after the end of the Second World War began to give way to better times. Employment levels rose to new heights, white consumer goods appeared in shop windows for the first time, television replaced the radio in most homes, rock and roll was born, the National Health Service provided free health care to the nation, more children went to grammar schools, leisure time increased, families went on holiday, and the new Queen was crowned — bringing in a glorious new Elizabethan age.

Of all the major political, economic and social events of the 1950s the one that was remembered most was the Coronation on 2 June 1953. Since the death of King George VI in November 1952, at the early age of fifty-six from lung cancer, the Coronation had been eagerly awaited. The Coronation was recalled not only because of what it represented but mainly because of the street parties and the fact that it marked the first occasion when many watched television. 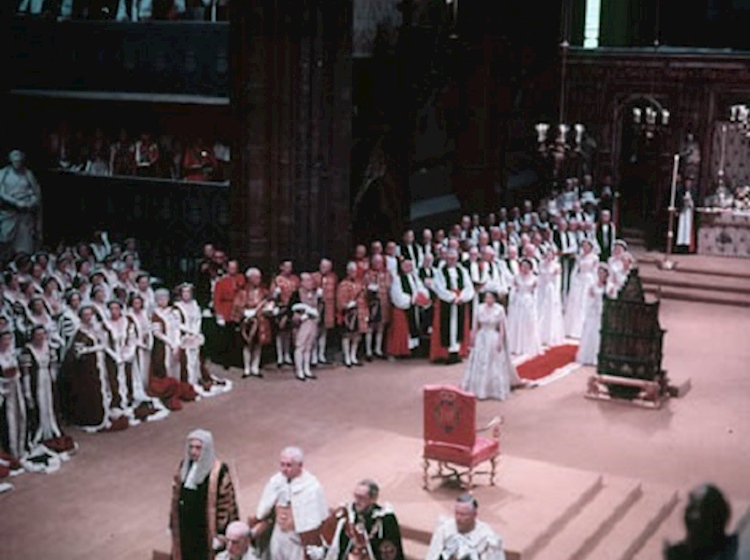 ‘I remember 1952 when the King died more than the Coronation because it was the day I went to hospital for a pre-natal examination – I was expecting Josephine – and I remember somebody standing at the bottom of the steps by the railway and saying, “He’s dead, he’s dead”, and I said, “Who’s dead?” And he said, “The King’s dead.” I was astonished. When I went home there was nothing on the radio apart from stately music. And then of course there was the Coronation the next year. I went up to London with three of my college friends and we sat out in the road and watched. It was the first time that I had left Josephine in the charge of her father. I was convinced I was going to come home and find her ill. We sat in St James’ Street to watch it, which is fairly close to the Palace. We chose it particularly because it is narrow and we thought we’d get a good view, but it poured and poured with rain. In the morning, when people and carriages started making their way to the Abbey – the whole place was police lined of course –  it was such a dull miserable day that anything that walked down the road got cheered. The men sweeping the road got cheered and a dog wandering down the road also got cheered. And one or two men who must have been lords or something, they got cheered and looked very embarrassed. It was quite funny really.

It was pouring with rain and the poor old Sultan of Zanzibar was sitting in the same carriage as the Queen of Tonga and he was looking so miserable and there was this huge, great lady next to him gracefully waving in the pouring rain. After Elizabeth had been crowned we went to Buckingham Palace and watched it all. I’m not a royalist but it was a spectacle.’ 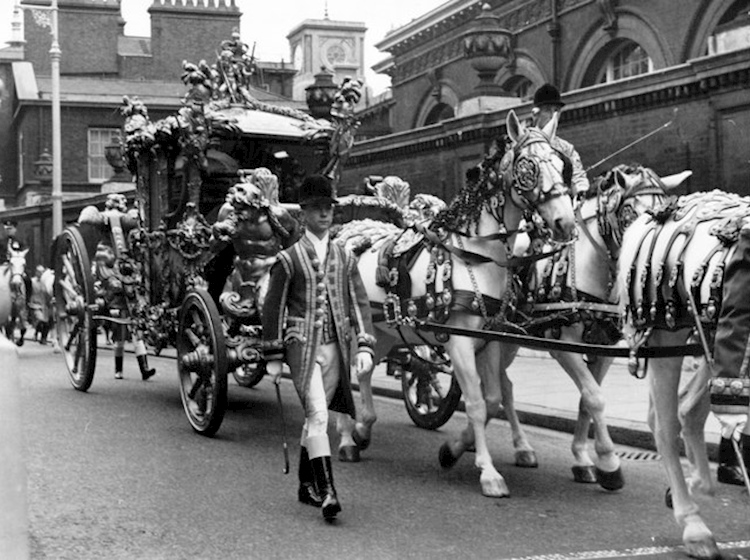 ‘I have a vague memory of the King’s death. We had to stand up in class for a minute’s silence. Presumably that would have been for the funeral. But that’s all I remember about that. I do have some stronger memories of the Coronation. We didn’t have a television, in fact we didn’t have one until about 1960, but my granny bought one for the Coronation, or rented, I don’t know which. She lived at home with three of her grown-up children, none of whom were married, but a couple of them were working, so they had a little bit of spare money. Anyhow, it was a whole-day event. We arrived early enough to see the future Queen emerge from Buckingham Palace in her carriage to make her way to Westminster Abbey. I have a suspicion it was raining as well. We stayed at granny’s all day. Neighbours and friends were piled into the house and would come and go. I vividly remember that we had lunch, sandwiches and cakes in front of the telly, and then more tea in the afternoon and more cakes later on. And so it went on, all day with granny and my aunts popping into the kitchen all the time to make more pots of tea and produce more sandwiches. But what everybody was talking about was the Queen of Tonga. She was a rather stout lady if I remember, who smiled and laughed throughout the proceedings despite the pouring rain. She made a rather cutting contrast to our own sour-faced royal family. We also got a commemorative Coronation mug. I think we were given it at school and I think my mum bought a book with the order of the Coronation service in it.’

‘We didn’t have a television until 1960. I don’t think we even saw the Coronation until we went to the pictures. We listened to it on the radio; our Janet was six months old. I remember the King dying. It was rather a surprise and young Elizabeth on holiday in Africa was suddenly called back. There were street parties for the Coronation and everybody came out. There were trestle tables down the middle of the road and everybody shared their food. They had one recently, they sealed the road off, but each little family had their own table and their own things. It was not very communal like in the past. I think people had more fun in those days, they shared things. Of course they’d gone through a war, when they had to share things.’

‘I remember the Coronation well. At church we had a pageant and I was Queen Elizabeth II! My mother made all the clothes and was very involved. And we had a street party. We were one of the few, maybe the only people in the area to have a television. My father was always interested in new things. We were the first in the area to have a washing machine as well. David, my brother, was a great supporter of the missionaries and he got out his missionary box and made people who came to our house pay to watch the Coronation, and he made some money for the missionaries. Then we all got dressed up and had a street party. I was a Welsh woman, all dressed up, and one of my brothers was a herald. Everyone was dressed up.’

‘I very clearly remember watching the Coronation – Richard Dimbleby commentating. It was a whole-day event, with the whole family gathering around my grandmother’s TV set. It brings back very vivid memories. We were given a book called Elizabeth Our Queen, which I discovered in a pile of my mother’s stuff after she died. And there was a brochure as well showing you where everyone was sitting. It was what sold TV to the British public. The sale of television sets prior and immediately afterwards went through the roof. My father was teetotal so we had relatively little alcohol in the house, but on Coronation day I remember lots of alcohol being drunk. On Christmas Day we would have a bottle of Graves with the chicken. That was the only time we had wine in the house.’

‘On Coronation day, the whole family went to my aunts, my mother’s sister. She was the only member of the family who had a television. They had a tiny house with a tiny television set. I don’t really remember watching it though. What I do remember is that we had cold lamb with mint sauce. The cat got so agitated by all the people there that it ran up the chimney then fell down and there was soot everywhere. The Coronation to me is cold lamb and mint sauce and the smell of soot.’

Extracted from You've Never Had It So Good! by Stephen F. Kelly

The Coronation Of Her Majesty Queen Elizabeth II

Discover books about kings and queens