The television set – the humble box in the corner of almost every British household – has brought about some of the biggest social changes in modern times. It gives us a window into the lives of people who are different from us: different classes, different races, different sexualities. And through this window, we’ve learnt that, perhaps, we’re not so different after all. Acclaimed social historian Stephen Bourne looks at gay male representation on and off the small screen, telling the story of the innovation, experimentation, back-tracking and bravery that led British television to help change society for the better.

Mark Gatiss talks about the actor Peter Wyngarde in Jason King ‘popping his cherry’ – that is, making him realise he was gay. What was the first television programme that made you think the same way?

I cannot think of a specific programme that made me realise I was gay, but when I was growing up I was drawn to strong working class women in TV dramas. These would include Ena Sharples and Elsie Tanner in Coronation Street. In 1970, when I was twelve, I bought a paperback book about the series and from this I read about the writer Tony Warren who created Coronation Street and Ena and Elsie. The book didn’t state that Warren was gay, but it was clear from the interview with him that he was. It intrigued me that a gay man had created what was then Britain’s most popular television show and some of its most iconic women characters came from him. In Playing Gay I quote from an interview with Tony Warren in which he acknowledges that some of the lines he scripted for Elsie Tanner in early episodes came straight from the mouths of gay men he befriended in Manchester in the late 1950s and early 1960s. 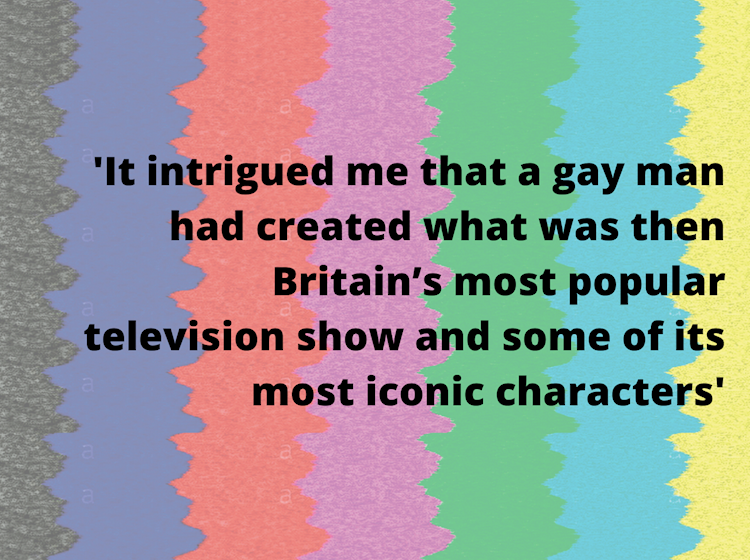 Which programme do you think has had the biggest impact on society?

Undoubtedly The Naked Civil Servant, first shown in 1975, has had the biggest impact on society. Everything about it is outstanding, including the script, acting, direction, sets, costumes, music. It has stood the test of time. It never fails to entertain, shock, raise a smile, move the viewer to tears. The main reason for this is John Hurt’s unforgettable portrayal of Quentin Crisp. As I have stated in Playing Gay, in 1975 this was the first television drama to portray the life of a gay man which was acceptable to the majority of its viewers.

The book is peppered with anecdotes from your own life – did you find that as the subject was so much a part of your childhood and adolescence it was hard to separate your memories from your research?

I found it very difficult to be objective. Fortunately, I do not write from a detached, ‘academic’ perspective. I avoid using academic theory and jargon. Apart from anthology and technology, there are no words ending in ‘ology’ in Playing Gay! I write from the heart, with careful attention to detail and the sources I use whether they be books, newspaper reviews, interviews or the actual programmes. Fortunately, I have managed to locate and view most of the television programmes cited in Playing Gay. Some of them no longer exist, but quite a number have survived in the archives. 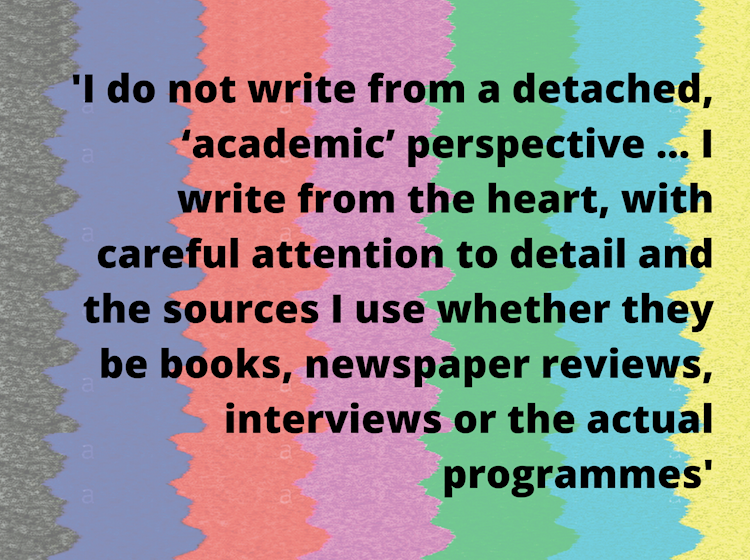 If you had to pick a favourite, which character from the Golden Age is the most important to you and why?

There are several gay characters in television dramas that have made an impression on me but two that are memorable and have stayed with me are Lola, the gay transvestite in Crown Court (1976). Brilliantly portrayed by Philip Sayer, Lola is falsely accused of importuning an undercover, plain-clothes police officer in a gay club. However, Lola is determined to prove his innocence. Defiant, with a tremendous belief in himself, Lola is a champion of gay individuality and confidence in an era when we, as a community, were still misunderstood, despised and spat upon by society. I would also like to mention John Bury, beautifully played by Joseph O’Conor in the remarkable play Only Connect (1979), written by Gay Sweatshop’s Noel Greig and Drew Griffiths. He is an older gay man, living in retirement in a mining town, who recalls a love affair he had in his youth with Edward Carpenter (1844-1929), the English writer and Utopian socialist.

Playing Gay’s early roots are in Out of the Archives, a season at the BFI Southbank that you curated in the 90s. Twenty-seven years have passed since this began; what, to you, was the best thing you found in your research?

The best thing I ever found was Only Connect. I first saw it when Its producer W Stephen Gilbert screened it for me at his home. He had kept a private recording on videotape. In 1992, when I launched Out of the Archives at the National Film Theatre, I screened it for the public for the first time since its transmission thirteen years earlier. I love Only Connect, which is why I have included a chapter about it in Playing Gay, as well as a tribute to the late Drew Griffiths, who was taken from us too soon. In Playing Gay I have said: ‘The Naked Civil Servant and Only Connect are two sides of the same coin. The former is all about oppression, individuality, fighting, and Only Connect is about loving, but this was the breakthrough.’