Phantom rider: Haunted by a hitchhiker

Imagine yourself driving down a lonely country road at night – you’re alone with only the car radio and the dashboard lights for company. As you round a bend you see coming out of the blackness a solitary figure standing thumbing for a ride. Do you stop and offer a lift, or do you pass the traveller by and continue on your way? Maybe you think that someday you might be in the same situation yourself and decide against your better judgement to stop and help out.

Almost forty years ago, a young tradesman from Bedfordshire decided he would play the Good Samaritan and pick up a stranded traveller. It was to prove to be one of the most chilling and convincing paranormal encounters of modern times.

Late in the evening of 12 October 1979, 26-year-old carpet fitter Roy Fulton from Dunstable was returning home from a pub darts match in nearby Leighton Buzzard when he stopped to give a lift to a young man standing on an isolated stretch of Station Road on the outskirts of Stanbridge. Notions of ghosts and the supernatural were far from Fulton’s mind as, being an avid Liverpool supporter, he was casting his thought’s ahead to the following day’s match and the prospects of his favourite team. In the glare of the Mini van’s headlights he saw a youth standing on the nearside verge thumbing for a lift. Deciding he was going either to Tottenhoe or Dunstable, Fulton came to a halt in front of the hitchhiker who walked along the road towards the van. He was casually dressed in dark trousers and jumper and wore a white-collared shirt. Nothing seemed out of the ordinary. The man opened the passenger door and got in. When asked where he wanted to go his only response was to point ahead further down the misty road. Fulton let in the Mini’s clutch and the van pulled away. 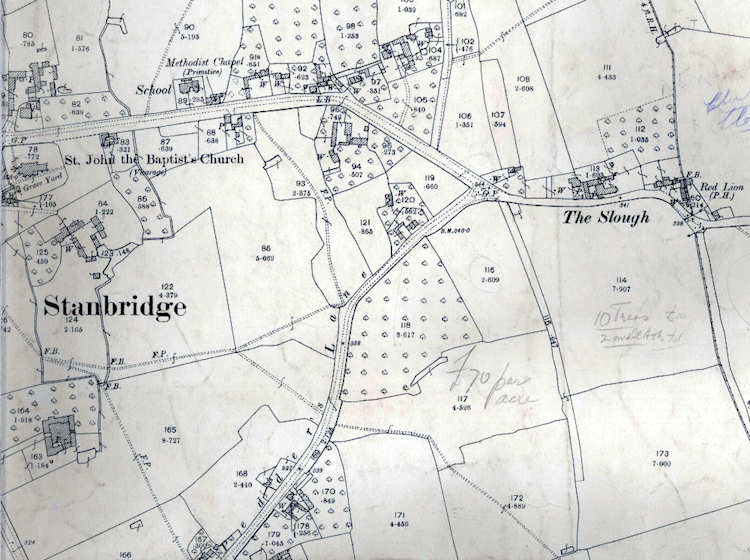 The journey continued in silence for some minutes until Fulton decided to offer the youth a cigarette. It was the point where what had been a completely ordinary and familiar situation suddenly crossed over a threshold into the strange and frightening world of the unknown. ‘I leant forward and picked up the packet of cigarettes,’ he later recalled, ‘turned round to offer the lad one, and that man or boy was not sitting there.’ Stunned, Fulton pulled the Mini to a halt and turning on the interior light looked into the back, thinking the youth had somehow climbed into the rear of the van. There was nothing there – Roy Fulton was completely alone.

Now terrified, Fulton drove in a panic to his local pub, The Glider in Lowther Road, Dunstable. Ashen-faced and shaking, he blurted out his terrifying story to the landlord Bill Stone and a group of regulars. Two things haunted him about his experience: that the eerie pale-faced youth was somehow part of an earlier traffic accident which had not been reported, and secondly that the sad silent figure would somehow follow him home. Fulton was later interviewed by writer and researcher Michael Goss and in 1985 took part in the respected television documentary series Arthur C. Clarke’s World of Strange Powers. On both occasions he told the same story without any deviations or embellishments – that one night in October 1979, he took a ghost for a ride. Many countries as diverse and wide apart as Sweden, Pakistan, Canada, Korea and South Africa all have their individual and specific phantom hitchhiker tales, but the experience of Bedfordshire motorist Roy Fulton ranks as one of the most compelling and thought-provoking of all.

Read more about the unexplained