Over the centuries many different cultures, religions, political movements and individuals have developed peace symbols to communicate peace, harmony and reconciliation. Here we look at the origins of a few of them. 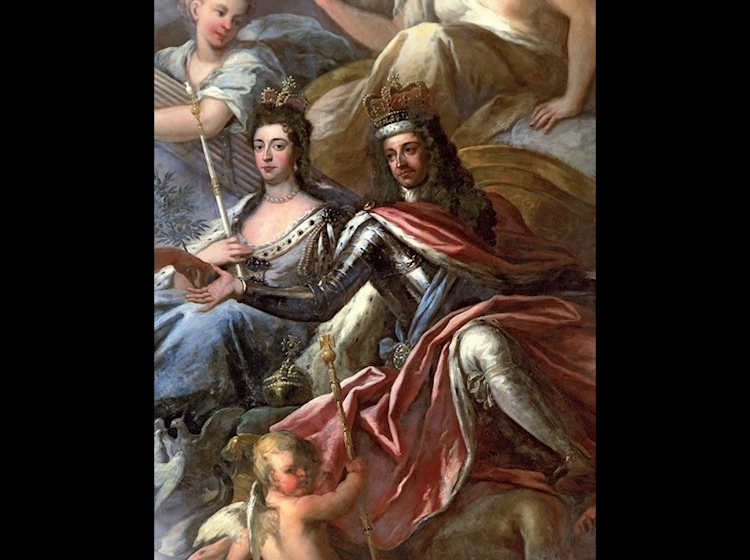 Peace and Liberty Triumphing Over Tyranny by James Thornhill

In the early cultivation of the olive it took years for the trees to bear fruit for the harvest, so it was believed that anyone who planted olive groves must be expecting a long period of peace. Furthermore, wars between states were suspended during the Olympic Games and the winners were given crowns of olive branches to wear.

Later representations also associate the olive branch with peace. 17th century poets used the olive branch as a symbol of peace and a Charles I gold coin of 1644 shows the monarch with a sword and olive branch. English coins of the 18th century depict Britannia with a spear and olive branch and in July 1775 the American Continental Congress adopted the ‘Olive Branch Petition’ in the hope of avoiding a full-blown war with Great Britain.

James Thornhill’s allegorical painting Peace and Liberty Triumphing Over Tyranny depicts King William III and Queen Mary - who had enacted the English Bill of Rights - enthroned in heaven with the Virtues behind them. Peace, with with her doves and lambs, hands an olive branch to William, who in turn hands the cap of liberty to Europe, where absolute monarchy prevails.

The dove has been a symbol of peace and innocence for thousands of years in many different cultures. In ancient Greek mythology it was a symbol of love and the renewal of life and in ancient Japan a dove carrying a sword symbolised the end of war. Early Christians portrayed baptism accompanied by a dove, often on their sepulchres and in the story of Noah in the Bible, when the flood waters receded, Noah sent out a dove which returned with an olive leaf, to show that the Biblical flood was over and that life had returned to Earth. Ever since, in the Christian faith, the dove has symbolised deliverance and God’s forgiveness.

Pablo Picasso made the dove a modern symbol of peace when it  was selected as the emblem for the World Peace Congress in 1949. The dove became a symbol for the peace movement and the ideals of the Communist Party.

Considered a sacred plant in many cultures, mistletoe generally represents peace and love. Most people are aware of the Christmas tradition of kissing under the mistletoe, which some believe comes from Scandinavian mythology – the goddess Freya’s son was killed by an arrow made of mistletoe so in honour of him she declared that it would always be a symbol of peace and as a result it was often hung in doorways as a sign of friendship. The ancient Druids also believed that hanging mistletoe in your doorway warded off evil spirits, and tribes would stop fighting for a period of time if they encountered a tree with mistletoe.

A rainbow peace flag hanging from a balcony

Another ancient and universal symbol for peace, the rainbow often represents the connection between humans and their gods. In Greek mythology it was associated with Iris, the goddess who brought messages from the gods on Mount Olympus and in Scandinavian mythology the rainbow was a bridge between the gods and the Earth. In the Bible a rainbow appeared to show Noah that the flood was over and that God had forgiven his people and in the Chinese tradition the rainbow is a common symbol for marriage because the colours represent the union of yin and yang.

Nowadays the rainbow is used by many popular movements for peace and the environment. In 1923 a rainbow flag was designed by the International Co-operative movement in Basel, Switzerland to celebrate the movement’s ideas of international solidarity, economic efficiency, equality, and world peace. For a peace march in 1961, pacifist, social philosopher and activist Aldo Capitini had several coloured stripes of material sewn together by women in Perugia to make a flag which could be used for a march from Perugia to Assisi. The march has been repeated many times since and the flag used commonly has seven rainbow-coloured stripes with the word ‘Peace’ (Pace in Italian) in the centre. In the 1980s San Francisco artist Gilbert Baker designed a similar flag as a symbol for gay pride (usually with the red stripe at the top). Pace flags underwent a resurgence in 2002 during a campaign entitled ‘pace da tutti balconi’ (peace from every balcony) - a protest against the impending war in Iraq.

Although it predates the 1921 foundation of London-based War Resisters’s International (WRI), the broken rifle symbol has been adopted by the WRI and its affiliates. The first known example of the symbol was in the January 1909 issue of De Wapens Neder (Down With Weapons), the monthly paper of the International Antimilitarist Union in the Netherlands. It also appeared in a 1915 pamphlet, Under det brukne Gevaer (Under the Broken Rifle), published by the Norwegian Social Democratic Youth Association and the (German) League for War Victims used the broken rifle on a 1919 banner. Ernst Friedrich, a German who had refused military service, founded the Anti-Kriegs Museum in Berlin, which featured a broken rifle over the door.

In 1933, during a time which there was widespread fear of war in Europe, the anti-war Women’s Co-operative Guild began the practice of distributing white poppies as an alternative to the red poppies given out by the Royal British Legion in commemoration of servicemen who died during the First World War. The white poppies were chosen to embody both remembrance and pacifism, with the white symbolising a lack of bloodshed. Although they were not meant to conflict with the red poppy and were merely designed as an alternative, the white poppy is sometimes seen as a political symbol. In 1934, the newly-formed Peace Pledge Union (PPU), the largest British peace organisation during the inter-war years, joined in distributing white poppies and laying wreaths of white poppies as ‘a pledge to peace that war must not happen again’. The PPU revived the symbol in 1980 as a way of remembering victims of war without glorifying militarism.

Russian artist, cultural activist and philosopher Nicholas Roerich founded a movement to protect cultural artefacts and used a symbol of a maroon-on-white emblem consisting of three solid dots surrounded by a circle. In 1935 Roerich initiated a pact which was signed by the United States and Latin American nations, agreeing that historic monuments, museums and scientific, artistic, educational and cultural institutions should be protected in times of both peace and war. Roerich described the circle as representing the totality of culture, with the three dots being Art, Science, and Religion, three of the most embracing of human cultural activities. He also described the circle as representing the eternity of time, encompassing the past, present, and future. The emblem has also since been used on peace banners.

The ‘V’ sign – a hand gesture which has the palm outwards with the index and middle fingers open and all others closed – was used during the Second World War. Suggested by Victor de Laveleye, former Belgian Minister of Justice and director of the Belgian French-language broadcasts on the BBC  and promoted by BBC presenter Douglas ‘Colonel Britton’ Ritchie, resistance fighters in German-occupied territories used it as a symbol of camaraderie and strength during World War II as it represented the first letter of French, Flemish and English words for ‘victory’ (victoire, vrijheid and victory, respectively). Famously, UK Prime Minister approved of the V for Victory campaign and adopted the V sign, and Charles de Gaulle was known to flash a full-arm version of the sign during speeches. In the USA during the 1960s activists against the Vietnam War adopted the sign as an anti-war symbol of peace. 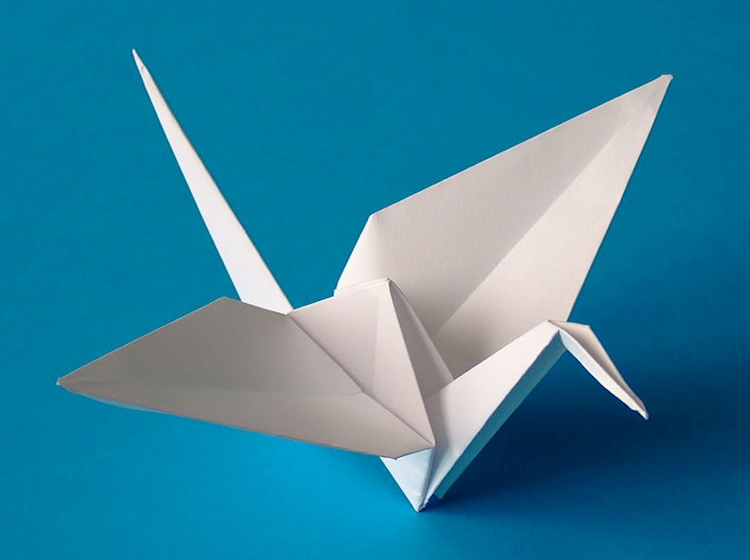 A traditional symbol of luck in Japan, the crane was popularised as a peace symbol by the story of Sadako Sasaki (1943 - 1955), a girl who died as a result of the atomic bombing of Hiroshima in 1945. As a result of radiation, Sadako developed leukaemia and it is said that she spent her final days constructing origami paper cranes after being told some Japanese folklore which promises to grant a wish to whoever produces 1000 of them. Her story inspired the adoption of the paper crane as a symbol of peace in Japan and statues of the girl stands in Hiroshima’s Peace Park and Seattle’s peace park, often adorned in paper cranes by visitors.

This symbol, originally designed for the British movement for nuclear disarmament is now widely used
Embodying the national debate over US involvement in the Vietnam War, a US soldier holding a gun wears a peace symbol amulet

Internationally recognised and known as the peace symbol, the CND symbol, the nuclear disarmament symbol or the peace sign, this symbol was designed for the British nuclear disarmament movement by Gerald Holtom, an artist and engineer. He presented it to the Direct Action Committee on 21 February 1958 where it was accepted as a symbol for a march from Trafalgar Square, London to the Atomic Weapons Research Establishment at Aldermaston in Berkshire on 4 April that same year.

The symbol is a combination of the semaphore signals for the letters ‘N’ and ‘D’, standing for nuclear disarmament. Superimposing these two signs forms the shape in the centre of the symbol. The symbol became the badge of the Campaign for Nuclear Disarmament (CND), and because it was not copyrighted, trademarked or restricted the symbol spread beyond the CND and was adopted by wider disarmament and anti-war movements. By the end of the 1960s the symbol had been adopted as a generic peace sign, crossing national and cultural boundaries.