Oradour-sur-Glane: An echo from history

As news spread of the Allied landings in Normandy, and thoughts turned to the liberation of their country, few throughout France could have predicted the fate of Oradour-sur-Glane, a community in Haute-Vienne, near the city of Limoges. On 10 June 1944 the inhabitants of the large Limousin village were just finishing their lunch. After an overcast Saturday morning, the warmth of the midday sun had broken through the clouds.

One of the two Dupic Textile shops in Oradour-sur-Glane. During the monthly fair, shops displayed their range of products in the street (Collection Benoit Sadry)

Just after 2 p.m. conversations in homes, cafés and hotels were interrupted by a rumbling sound coming from the road to Limoges. On the other side of the bridge that spanned the river Glane, a column of dark green vehicles was approaching. Soon, armoured half-tracks and trucks, some of which were packed with soldiers, were climbing the steep incline of the village, following the tram lines that led back to the city. The soldiers, dressed in a greyish green uniform and holding weaponry, stared at onlookers who lined the main street. Most of the villagers had never seen Germans before, and they had never been bothered by such visits to their village. Already, a cordon around the village had been set up, taking in some of the surrounding hamlets and farms that made up the commune. Anybody within the village was told to go to the village square for identity checks. Many were coerced, though a state of relative calm was maintained. They were told that arms were being stored in the village by the Resistance and that a search would be conducted. It was common knowledge among the villagers however that there was no armed Resistance in or around Oradour, so most were reassured, even as men and women were separated and the school children arrived on the square led by their teachers.

A procession leaves the church, heading to the upper village. On the right is the open marketplace, Les Halles (Collection Jean-Pierre Senon)
Faces in the streets of Oradour

That murderous afternoon, 643 men women and children were killed. All men over the age of sixteen were taken to six locations, mainly barns or small warehouses, and shot. Their bodies, many still living, were covered with combustible materials, and set alight. The women and children, over four hundred of whom had been crammed into the small ancient village church, were asphyxiated with black smoke before being fired on. The interior was set alight quickly reducing most bodies to cinders.

That afternoon there were few survivors. A handful of men escaped from one of the barns, the Laudy-Mosnier barn, and one woman managed to escape through one of the church windows, having witnessed the death of her two daughters and baby grandson under a volley of bullets. 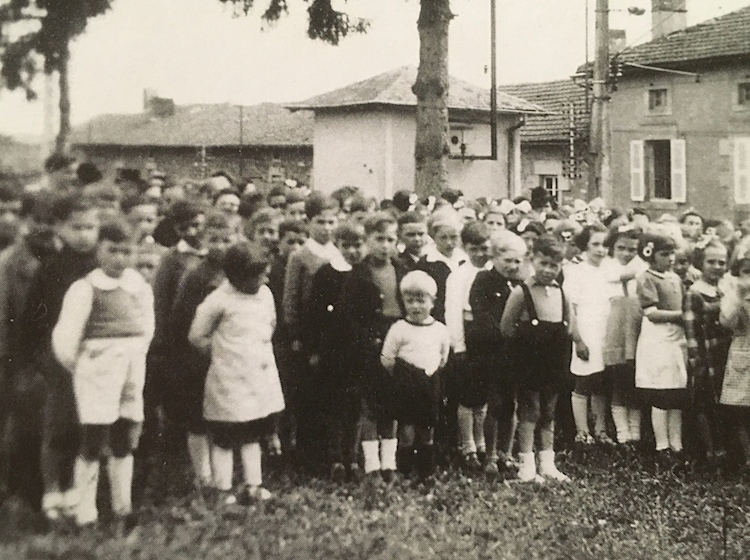 The village’s schools, including one that had been set up for refugees from Lorraine and Moselle, had been full that morning. Families from the surrounding hamlets had said goodbye to their children who had walked to the main bourg with their friends. None returned. Only one schoolboy, from a family who had warned him of the dangerous Germans, fled undetected.

The parents of children whose homes had been located outside the perimeter of the round-up were made to wait several days by German sentries who had returned to ensure destruction. Only after the Germans had finished were they allowed to look for their loved ones. At first they had believed that their children had been held safely nearby. When nobody returned their anxiety became too much to bear. Rumours circulated from some who had managed to sneak within the perimeter of the village. Everyone had died. Mountains of human ash were in the barns and church. Bodies lay about, and the destruction of buildings had been total. Some farm animals had been spared, afforded more dignity than any human.

When those parents finally were able to enter the village the scenes were beyond anything that any of them had dared to imagine. The SS had returned to dig mass graves and burn the bodies lying in the street. They had been determined to remove Oradour-sur-Glane from the map, and its inhabitants were not to be identified.

News of the massacre was slow to spread. Local press was censored by the German occupiers and word circulated primarily through word of mouth and messages spread by the Resistance. The clear up operation lasted weeks. Bodies were found in a well on the edge of the village. Others were found in and amongst the wreckage, few of them identifiable.

Everyone had been killed whatever it had said on identity documents which had remained unchecked. Political persuasion, religion, or reason for being in the village that Saturday morning had meant nothing. More detailed accounts emerged from the male survivors of the Laudy-Mosnier barn, from Madame Rouffanche who had escaped the church, and from others who had hidden or fled when the soldiers had arrived.

The names of the generals responsible for ordering the 3rd Company, 1st Battalion, 4th SS-Panzergrenadier Regiment Der Führer, a subordinate unit of the 2nd SS Panzer Division Das Reich to commit the crime, were known almost immediately afterwards. These men were protected from extradition and trial by conciliatory accords between Britain, France and West Germany. Post-war politics meant that few who had been responsible or had taken part in the operation were ever punished, despite a military tribunal of some of the foot soldiers held in Bordeaux in 1952. Meanwhile, in the hamlets around the village, no children remained. In 2014 investigators found a file in the archives of the stasi, the East German police, which established the identities of almost all of the 150 soldiers who took part in the operation in Oradour that day. Most were German, others were forced conscripts from Alsace Lorraine, and a few others were from elsewhere in occupied Europe.

The remains of Oradour-sur-Glane were preserved by order of General de Gaulle, a demonstration of France’s wartime martyrdom. Its victims had included refugees displaced from the North and from the Spanish civil war, Jews trying to escape persecution by the Vichy regime, and children sent to the safety of the Limousin countryside where Allied bombs would not touch them. The massacre was decided at a high level in the Nazi military order. Resistance in southern and central France was being maintained by the complicity of the population. A lasting and brutal strike was to be inflicted. Oradour-sur-Glane fulfilled certain criteria. Easy to surround, armed resistance nearby was negligible and the village was not far from the planned route of the slow move northwards towards the battle for Normandy. Rumours circulated, propagated by the Germans, of targeted action by the Resistance nearby. Some subsequently claimed that the wrong Oradour had been targeted. No evidence exists that any these narratives, all propagated by the SS and the German garrison that remained in nearby Limoges, were directly attributable to the fate that befell Oradour-sur-Glane.

The world has changed since June 1944. Many hundreds of thousands of villagers each year visit the ‘village martyr’ which stands next to the rebuilt Oradour-sur-Glane. Most are left questioning how such a thing could have happened. The tragedy of the story is that Oradour is representative and will never be alone. There are many more such villages in Eastern Europe condemned to memory through acts of violence. During the second World War they were carried out by soldiers ordered to carry out inhumane acts justified by skewed ideology. In April 2022 when the fate of the town of Bucha in Ukraine became known, the name of Oradour-sur-Glane was brought to the lips of observers. President Zelensky subsequently referred to the village of Oradour-sur-Glane when making a speech to the French. Once again the world is at danger of such cruelty.

Oradour-sur-Glane no longer stands as a symbol of French wartime martyrdom. It stands as a reminder to us all of lives and loves cut short; of whole families destroyed on a sunny afternoon for no reason other than a thirst for power and misplaced beliefs of supremacy. In war it is the ordinary people who suffer most. Children died in Oradour and children are dying in similar circumstances throughout the world in the twenty-first century. Humankind must learn the lessons of the past.