Operation Goodwood and the Normandy campaign

As a student of armoured warfare in the Second World War for many years, I researched Operation Goodwood very early on as it was one of the largest tank battles of the war. What soon became clear were the discrepancies between various historians and the official accounts of the numbers of tanks lost in this three-day clash of armour.

Numbers are plucked from the air by other authors, anywhere between two hundred and five hundred tanks left as smouldering wrecks littering the battlefield while even official reports are riddled with basic errors of addition. This started an extensive search of regimental war diaries and reports, histories and the memoirs of tank crew members who fought in the battle to put together a more accurate record of the numbers of tanks lost.

After studying the battle casualties, I then wanted to better understand why the battle was fought and what its objectives actually were to determine whether it was actually a British defeat or victory. From the various official explanations and post-war comments of the generals involved, it became clear that the battle was highly controversial and to a great extent the battle was played down by Montgomery in particular. While Montgomery and Eisenhower are no longer with us to explain their views, we are left with their memoirs and correspondence to better understand their plans and intentions. These, of course, have to be read with a critical eye and a pinch of salt.

The controversy around Goodwood led me to look at the deployment of tanks in the rest of the Normandy campaign. It was only as I researched the key battles of the campaign further did I realise how poorly the tanks were utilised by both the Allies and the Germans and how the British and Canadians in particular came close to winning key battles or achieving a breakthrough, only to fail to capitalise on the opportunity.

Thus the Normandy campaign becomes one of controversial missed opportunities by the Allies and command problems for the Germans. The German panzer divisions seem to have been imbued with a fear and respect by the Allies out of all proportion to their actual achievements on the Normandy battlefield, even before D-Day; the mere threat of a panzer attack was enough for the British and Canadians to stop their advances. Yet the Germans, with supposedly some of the most effective armoured fighting units ever formed to defend Normandy, were unable to co-ordinate their actions and the campaign was rife with disagreements and changes of senior commanders, most of them due to Hitler’s interference. The planned massed panzer counterattack on the beaches never took place and it took Hitler himself to order the ill-judged and executed Operation Luttich from Mortain which only contributed to Germany’s rapid collapse in Normandy.

Of course, there were many other factors that affected the Normandy campaign, including the Allied tactical air forces, naval gunfire and the traditional problems of supply and logistics. The British and American air ‘Transportation Plan’ ensured before D-Day that all road and rail links with the Normandy battlefield were severely disrupted and it would be difficult for the Germans to bring up reinforcements and essential supplies such as fuel and ammunition. And a big factor was the effectiveness of the tanks themselves given the differences in performance of German and Allied tanks. For example, the DD tanks were an Allied secret weapon that was supposed to ensure the success of the D-Day landings and whether this was achieved or not remains a moot point today. There is no doubt that the adverse weather on the day was way beyond what the tanks were designed for or indeed the crews had been trained for but their launch had catastrophic results for one tank battalion. Many tanks were swamped, but other first-hand accounts tell of men struggling to support the collapsed sides of the screens in the heavy seas. One can only imagine the terror of young soldiers who had probably never been to sea before battling to keep their tanks afloat. My research found that there was a design flaw in the steel rails supporting the extendable screen of the tank that the British hastily fixed before D-Day without apparently telling the Americans…

An examination of the intentions of the German and Allied commanders in the Normandy campaign and then comparing it with the actual outcomes is a central theme of The Armoured Campaign in Normandy which I hope people will enjoy. I am indebted to the veteran tank crew members and William Folkestad who helped me in the writing of parts of the book over the course of the five years it took to write which involved extensive research at archives in London, Washington and Ottawa. 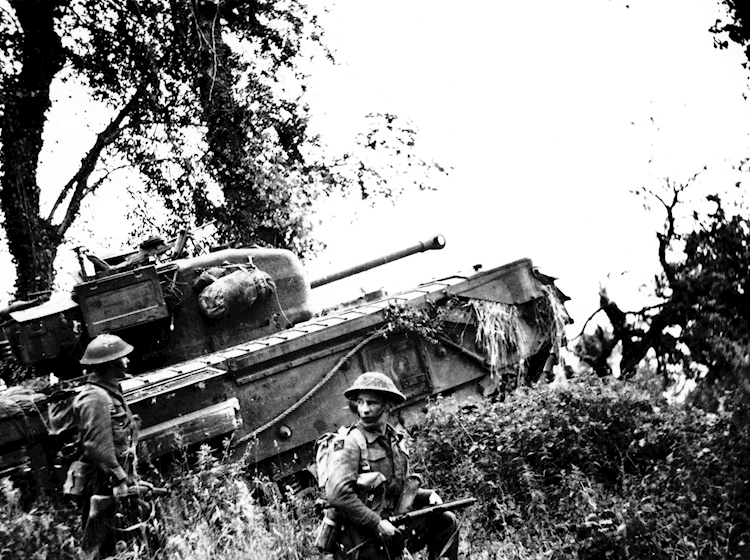