When Mandela’s car finally arrived, hours later than scheduled, excitement overrode order. People leaped on the car, hammered at is windows, shaking it – so that the driver retreated to the suburbs, before a second, slightly more orderly arrival. Summer light was fading when Mandela, from the balcony of the old town hall, spoke in public for the first time since the Rivonia Trial.

The speech was formulaic and its delivery wooden. Its most memorable line was an attempt to moderate messianic expectations: ‘I stand here before you not as a prophet but as a humble servant of you, the people.’ Mandela declared himself ‘a loyal and disciplined member’ of the ANC; he pledged to sustain the armed struggle and reiterated the Freedom Charter’s promise to nationalise the mines. A global television audience marvelled at the sight of Mandela, but few were uplifted or stirred by what he said.

Just twelve hours later a strikingly different Mandela was on display at an early morning press conference. Facing 200 experienced and hard-nosed journalists from across the world, he delivered ‘an exercise in seduction … a master class in political persuasion’. Every question elicited a superbly pitched response. Mandela’s characteristic delivery later became familiar – the self-deprecating humour, the formal diction, the blend of gravitas and glamour – but it thrilled on first airing. When the conference ended, wrote John Carlin, ‘something happened I had never seen before … in thirty years reporting on politicians. Hypnotising us into forgetting we were working journalists, making a mockery of our pretensions to objectivity, he drew from us a long burst of spontaneous, heartfelt applause.’80

With hindsight, these first two appearances by the released Mandela predicted much that took place over the next few years. They foretold that Mandela would become the ANC’s greatest asset – able to excite the masses and to confer legitimacy and respectability on the movement. They provided the first glimpses of a consummate political operator, keenly aware of the aura attached to him, and intent on using it to lever every inch of advantage for his cause. They explain his political priorities: first, to rally forces loyal to the ANC and enlist them for negotiations and the cessation of violence; second, to embark on a tireless round of foreign travel, raising funds and winning support for a liberation movement that had become effectively a government-in-waiting.

In the weeks after his release Mandela addressed huge crowds at rallies in all the major cities. His message was carefully crafted: on the one hand, militant – ‘Now is the time to intensify the struggle on all fronts’ – and on the other hand, calming, calling for discipline. What he said was largely ignored by adoring, chanting crowds. These were not so much political mass meetings as euphoric celebrations. Soweto, Port Elizabeth and Bloemfontein were successive staging posts for ‘Mandela’s coronation as king of black South Africa’.81

His reception was very different in Durban. His visit took place against the backdrop of vicious fighting in KwaZulu Natal between Zulu-speakers loyal to Inkatha (headed by Chief Mangosuthu Buthelezi) and those enlisted in the colours of the UDF, for long a surrogate for the ANC. Inkatha was originally a cultural movement, imbued with a patriarchal, conservative Zulu traditionalism; some of its members were armed and trained by the NP’s security forces to combat the UDF; in 1990, Buthelezi relaunched it as the Inkatha Freedom Party, aiming at a national following. Mandela, writes Ari Sitas, was ‘adamant and provocative’: he told a predominantly youthful crowd of ANC supporters to ‘take your guns, your knives, and your pangas, and throw them into the sea … End this war now!’ Many in his audience were ‘angry and devastated [at] … being given a lecture by an out of touch patriarch’.82

Given Mandela’s subsequent standing as virtually beyond reproach, it is worth recalling that in the first couple of years after his release his authority in the ANC was contested, not taken for granted. Some UDF leaders still fretted at Mandela’s secret meetings with government. In KwaZulu Natal, local ANC leaders blocked Mandela from meeting Buthelezi and negotiating directly with him. Activists were concerned that their icon was more conservative and more out of touch than they had expected. Within ANC structures Mandela was criticised for his autocratic style and failure to consult, and for being too close to de Klerk. However, at the ANC’s National Conference in July 1991, Mandela’s election as president of the ANC was uncontested and wildly applauded.

Outside South Africa, Mandela’s reception was overwhelmingly positive. Between his release and mid-1992, he visited forty-nine countries on sixteen separate trips. Nowhere was his progress more triumphal than in the USA in June 1990. Eight cities, from coast to coast, in eleven days; the largest ticker-tape reception New York had ever seen; the first African and third private citizen to address Congress. Everywhere he was received by his African-American hosts with messianic fervour. He was a modern Moses, said New York’s first black mayor, David Dinkins. ‘We have a new Jerusalem,’ cried church leader Benjamin Chavis. Mandela laid a wreath at Martin Luther King’s tomb; he began every speech with a roll-call of black American heroes and martyrs – and he raised over $7 million for the ANC.83

Back in South Africa, Mandela was only sporadically involved in direct talks. These were handled by Cyril Ramaphosa, Thabo Mbeki, Joe Slovo, Valli Moosa and others. The first meeting between the ANC and NP members was in May 1990; in August, the ANC made the vital concession of ending its armed struggle, and in December 1991 formal negotiations commenced. Progress was interrupted and at moments derailed by persistent violence, as Inkatha and ANC loyalists fought a low-level civil war in Johannesburg’s townships and in KwaZulu Natal but, if anything, the disruptions emphasised the need for agreement.

The negotiated settlement produced an interim constitution and bill of rights. It agreed a date for a general election based on universal franchise and provided for a subsequent Government of National Unity (GNU) in which any party winning twenty seats or more would serve. The settlement guaranteed security of tenure for white civil servants and approved that amnesty be offered to members of the security forces in exchange for full disclosure of abuses of power – the basis of the Truth and Reconciliation Commission.

Alongside the negotiations on constitutional arrangements, a less formal series of discussions on the economy were conducted between economic and political elites. They agreed on the need for macro-economic stability and the opening of the economy to international trade and finance: the prevailing globalisation orthodoxy. By accepting the ‘Washington Consensus’, the ANC jettisoned social democratic measures such as pro-poor spending and progressive taxation. In return for leaving the citadels of capital unthreatened, the ANC won an undertaking from big business to accelerate the entry of black shareholders into their boardrooms.

Arguably, the ANC’s acquiescence in the interests of big business in the transition period has been the decisive constraint on its performance in government since 1994. If so, to what extent was Nelson Mandela responsible for the ANC’s embrace of prevailing economic orthodoxy? He did not author the ANC’s shuffle from centre-left to centre-right on the economy, but his role was crucial in effecting it, in two main respects. First, he appears to have been especially open to the blandishments and persuasion of business interests at a personal level. He enjoyed the glamour of wealth in much the same way that he revelled in the glitz of show business and was ‘showered with a small financial fortune by friendly tycoons’.84

Second, Mandela’s moral authority and political clout were crucial in winning acceptance for a negotiated outcome that fell short of the expectations of the ANC’s supporters. He personified the ANC’s rightwards shuffle over the economy. On release, he insisted that departure from the policy of nationalisation of banks and mines was ‘inconceivable’, but at Davos in February 1992 he unilaterally removed nationalisation from the ANC’s agenda, promising to take the steps ‘necessary to ensure business confidence’. His change of heart was sincere enough but it translated into an insistence that the rest of the ANC should share his views. The crucial role played by Mandela, and by his adversary-cum-partner de Klerk, was ‘to market a grand historical compromise’, embodying and translating the contradictions of the process into a credible vision and morally legible narrative.85

Mandela also made a series of calls for forgiveness and conciliation as first steps to nation-building. He insisted that he bore no bitterness, that he forgave his jailers and that he sought common ground with white South Africans. He reiterated this stance on countless occasions – and he performed it. It was after his election as president that the most famous instances in the politics of gesture took place: the ‘reconciliation lunch’ for widows of Afrikaner politicians and their black opponents; a visit to have tea with Betsie Verwoerd, too frail to attend the lunch; and of course the appearance in a Springbok rugby shirt – when the team lifted the World Cup, white rugby supporters chanted ‘Nelson, Nelson’, and South Africans of all races wept with joy and disbelief. 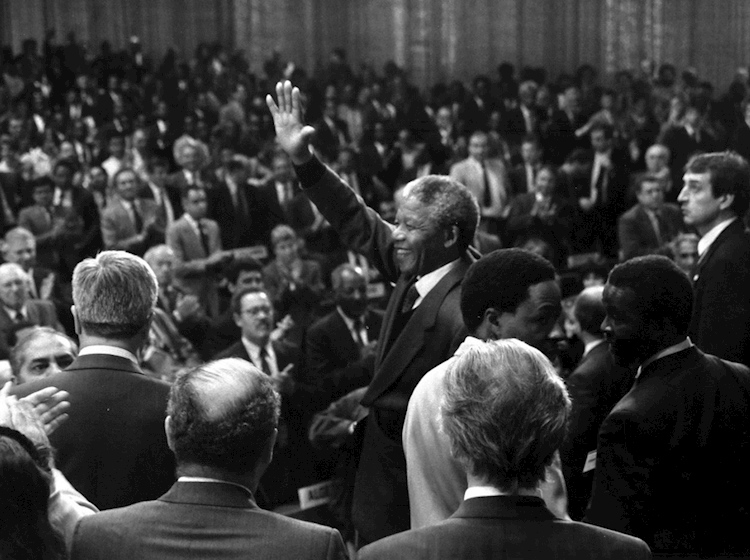