Memoir of a Tommy: Life on the Somme

The following is extracted from Private 12768: Memoir of a Tommy, an account of life in the trenches by Private John Jackson. Jackson served on the Western Front from 1915 until the war's end; he was present at Loos in 1917, on the Somme in 1916, in Flanders in 1917; he was on the receiving end of the German offensive in April 1918; and he took part in the breaking of the Hindenburg Line at the end of September 1918.

At 7 o’clock in the evening we set off to relieve the Norfolks whose position was supposed to be somewhere in front of High Wood. Owing to the heavy fighting in the sector at this time, the front line was never long in the same place. Old trenches were constantly being blown up by shell fire, and new ones dug every night, so that it was no light task finding the men we were to relieve. The whole valley of the Somme at this time was little better than a sea of mud, and roads were terrible to march over. Passing through ‘Death Valley’, strewn with the dead bodies of men and horses, and the wreckage of transport columns, with now and then great bursting shells falling around us, we struggled as best we could till dark. To try and keep as dry as possible we walked along the edge of the trenches feeling our way cautiously forward in the darkness. All went well until we got quite close to High Wood, when some shells landed a few score yards to our right. At this, the officer in charge ordered us into the communication trench for safety. For a few minutes, we scrambled along through mud and water up to our waists. After such a hard march, it was now midnight, this almost finished us, and we cursed the officer for having ordered us into such a place. At last, completely exhausted, we reached the wood which had previously been a German strong-hold. The wood was now reduced to a tangled mass of broken trees, and smashed wire defences, through which, in various directions, ran lines of trenches. Guides were to meet us, and lead us to the front lines, but we could find none of these, so we set off to locate the Norfolks ourselves.

Never, so long as they live, will any of ‘A’ Coy, to which Monteith and I had been attached as signallers, forget the horrors of that night. We were round the wood and through the wood, over and over again, but never a Norfolk man could we find. We tripped and fell over barbed wire, into trenches, over tree stumps, rose and tripped again the whole night through. The trenches were full of bodies both British and German. They lay in grotesque shapes, some indeed stood propped against the parapet, and more than once in the inky darkness we spoke to men who were beyond the power of answering our questions. Always there was the possibility of us running into the enemy lines, we were all strangers to the ground, so we tried to make as little noise as possible. Added to the invisible uncertainties, and terrors of the night, arose the nauseating stink of the dead and rotting human flesh. Small wonder men’s hair turned grey in a night.

As dawn was beginning to show in the east, Capt Elliott with his company took possession of an old trench, and Monteith and I were told to make our way back to Hqrs. We had been struggling along from 7pm till 5am and were glad to see the welcome daylight. The pair of us made ourselves comfortable in an old dug-out to the west of ‘High Wood’, set about making some tea, and after a good meal we lay down and slept quite soundly, all unconcerned about the shells that screeched and whined around us. After a few days of ‘holding on’ to this position, during which the regiment was heavily shelled almost incessantly, and received a heavy casualty list, we heard that the 1st Glosters would relieve us, for which we were not sorry. A few yards from the dug-out, in which Jimmy and I had taken up our quarters, was a monster shell hole into which 14 of the biggest men I ever saw had been dragged. They were all members of the Kaiser’s famous ‘Prussian Guards’, killed in the first battle for ‘High Wood’. This was only one of the awful sights in the vicinity. Wandering round one day I saw a pair of officer’s riding boots and, thinking they might be of some use, I stooped to pick them up, only to find they contained a man’s leg shot off by the knee. It was at ‘High Wood’, properly called Foreau Wood, where I first saw tanks in action and two of them got stranded in the middle of the tree stumps and trenches. The ammunition in these was set on fire by German artillery fire, and for a long time we could hear the ‘pop’, ‘pop’ of the cartridges as the heat reached and exploded them. At midnight on September 21st, the ‘Glosters’ relieved us, and the Camerons moved back about a mile to a sunken road known as Chester Street. Jimmy and I stayed all night in our own dug-out before going back to the battalion. Next day the 1st Brigade Hqrs, located in an old shell-shattered house at Bazentin-le-Grande was destroyed by enemy shells, and as we rested we watched and criticised the marksmanship of his artillery. From Chester Street, we had a good view of a large portion of the Somme battlefield, such famous places as Longueval, Delville Wood, Courcelette, all lying within view, with the woods of Bazentin behind, and the wreckage of High Wood in front of us. Villages and woods had been levelled almost to the ground, only a few bricks showing where peaceful country homes once stood, and tree stumps with here an isolated tree, and there a cluster of undergrowth, mutely marking the place where lovely woods had flourished. A more bleak and desolated spot could not be imagined, and certainly not described in words. In the wood of Bazentin we found artificial trees of steel, which had been erected and used by the Germans as observation posts. I also came across a Britisher and a German who had fought hand to hand, each dying with his bayonet driven through the body of his adversary. Truly two brave men they must have been. 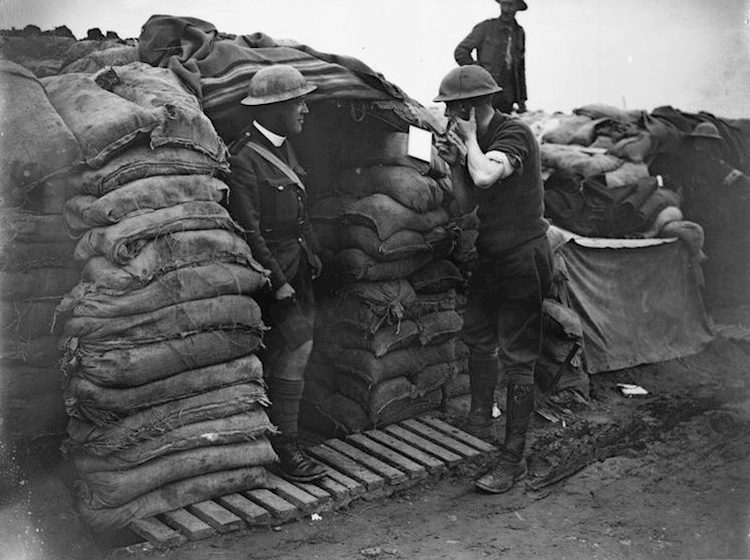 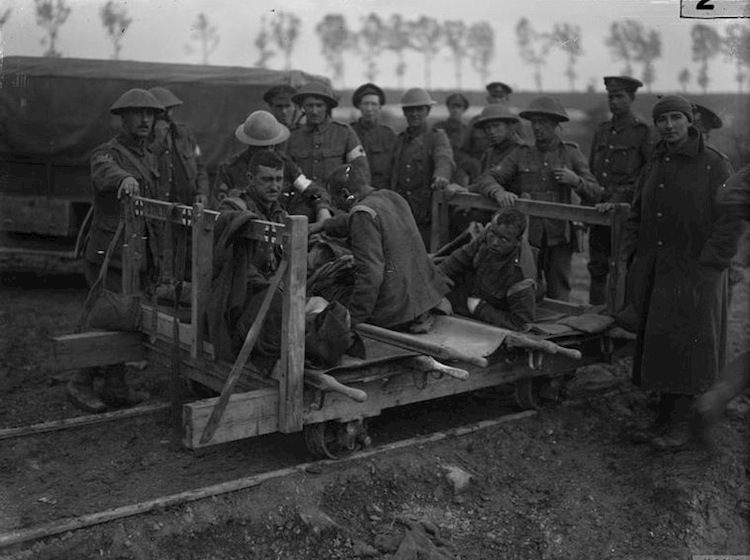 Wounded being transported to a dressing station by trench railway after a successful attack on Bazentin, July 1916 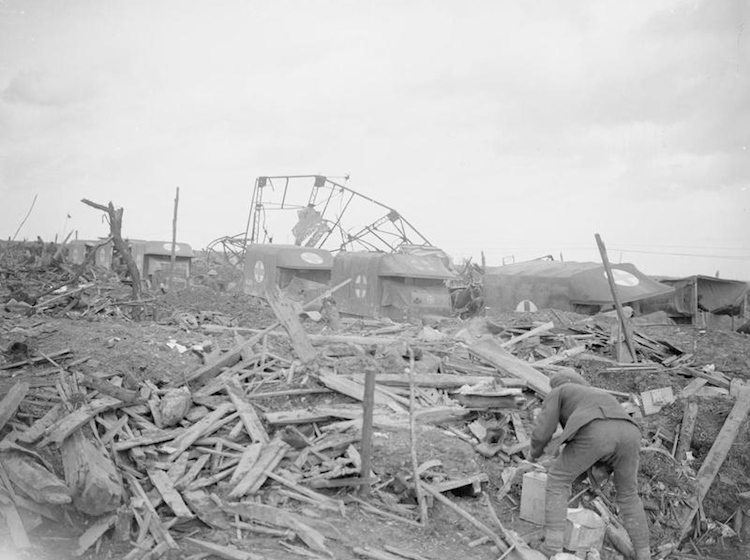 Motor ambulances in the ruins of Bazentin, November 1916
Map of the area from Montauban north to the Switch Trench through High Wood