Medieval tales from many lands

As any storyteller will tell you, stories grow in the telling as they are adapted over time to suit the peoples who tell them and the places where they are told.

And many of the stories we share are ancient, having already travelled far even before medieval writers like Giovanni Boccaccio and Geoffrey Chaucer first came across them over 600 years ago. Stories that were brought into Europe, then to Britain by visitors to this land, also merchants, soldiers sailors, pilgrims and other religious folk returning home, carrying something of the culture of the places that they visited - academic treatise on religion, history, alchemy, astrology, mathematics as well as stories and songs. 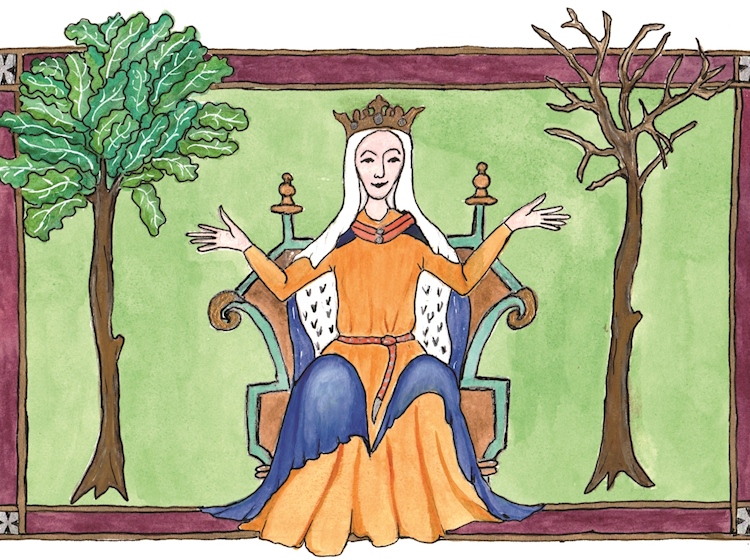 Sometimes these stories were still part of the oral tradition, passed from tongue to ear in taverns and halls by those soldiers and sailors returning home, perhaps swapping a tale for a drink of ale or some other favour. Others though were already set down in manuscript form, just like those learned academic works already mentioned, for the writers of these collections considered them to be just as important as any scholarly work on medicine or mathematics long ago.

These were not books aimed at children, but teaching aids written for educated folk. Collections like Disciplina Clericalis, which roughly translates as ‘Training for the Clergy’, a book written in the early 1100s by Peter Alphonso, a Jewish man from Spain who became a Christian and claimed that some of his tales came from Egypt. The stories were used to educate priests, but also used by them in turn as sermons to teach their parishioners right from wrong. Some 800 years ago for example, a monk called Caesarius of Heisterbach wrote his Dialogus Miraculorum, meaning ‘Talk of Miracles’; a book that contained many a strange and ghostly tale. Some of the stories told of the rewards that awaited those who diligently followed the teachings of the church, while others were used as warnings, telling of the punishments that awaited sinners in the afterlife.

In one tale a dying woman who has committed many wrongs has a terrifying vision and demands that she be buried in new boots. A strange request, but explained later in the story when after her death she is seen being chased by the Devil, her new boots aiding her ultimately unsuccessful attempt to flee. 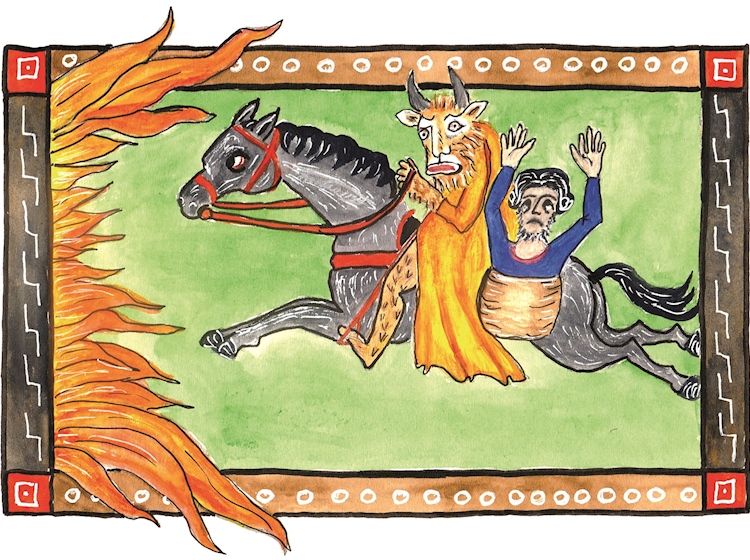 These early manuscript collections were also used to train young noblemen, the stories serving as exemplars, of both good and bad government. Collections like The Seven Wise Masters, which probably originated in India before travelling through Persia and other faraway lands while being translated into Hebrew, Syrian, Latin and Greek, before finally reaching Britain some 900 years ago. It contains a version of a story now famous in Wales; of the Welsh prince, Llewellyn who slew his faithful hound, Gellert because he thought the dog had killed his son, only to discover the child still alive and that the dog had slain the wolf who would have otherwise slaughtered the boy.

Versions of this ancient story can be found in other foreign texts like the Panchatantra, another Indian collection of tales that is over 2000 years old, although the individual stories may be much older still. The story contains the same basic narrative as later versions but is different in specific details, for the hound was originally a mongoose and while Prince Llewellyn certainly grieved for his dog erecting a monument over its grave, the poor priest who takes the place of the prince in those early Hindu versions is driven into such a rage that he kills his child and then himself.

Ancient tales from faraway were meant to educate, but also served to entertain those who were able to afford handwritten manuscripts long ago. Collections like the Gesta Romanorum, meaning The Deeds of the Romans written in the late 1200s, is a moral work, yet many of the stories are light-hearted especially when compared to the earlier originals.

The Gesta also borrowed tales from even earlier times including another version of the Llewellyn story mentioned above; stories that would be reworked by the likes of Boccaccio, Chaucer and later by Shakespeare. They also drew directly from earlier foreign sources, Chaucer for example took from bawdy French ‘Fabliaux’ written over 100 years before he was born. ‘The Friars Tale’ from his Canterbury Tales for example, where a summoner does a deal with the Devil, although the French version may have also been influenced by a much earlier North African tale. 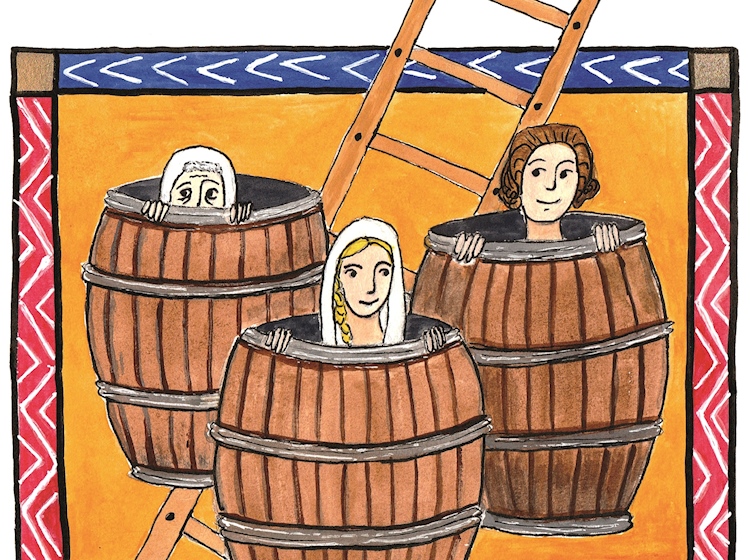 The French influence on British medieval tales cannot be overstated, for even the legends of King Arthur were reshaped by medieval French writers like Chrétien de Troyes. The process was kick started by the Norman conquest of 1066, which went a long way to reshaping the culture of England with many of its Anglo-Saxon myths and legends being all but supplanted by tales that had already travelled many lands.

We can see it to this day on the Bayeux Tapestry where the story of the fox who tricked a crow into giving him its cheese, is depicted no less than three times on the border of the embroidery. The fox perhaps represents the Saxon king, Harold, who cheated Duke William out of his English throne, only to see him win it back. A Norman French tale then, but a much older story still, for it can also be found in Aesop's Fables, a collection of stories, some of which are well over 2500 years old and from ancient Greece. Even one of Chaucer’s most famous Canterbury Tales, about Chanticleer the cockerel borrows from a 12th century French collection called The Romance of Reynard, which was itself influenced by much earlier Far Eastern stories. 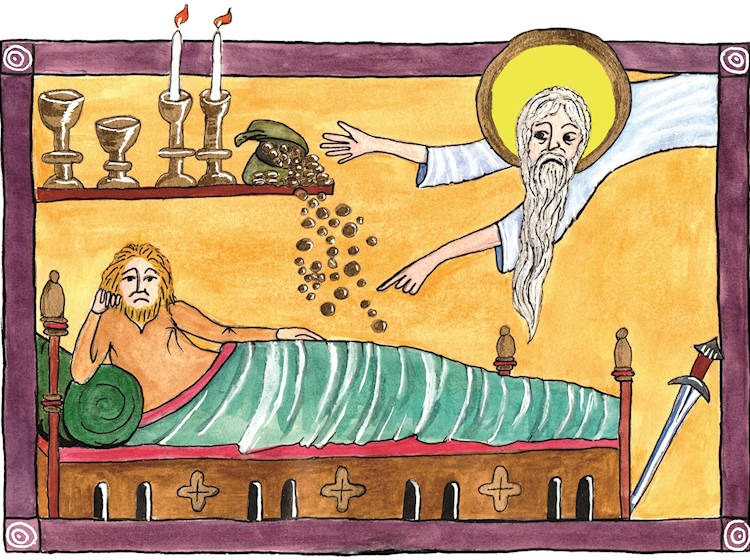 Medieval stories travelled many lands, some still part of the oral tradition, although we definitely owe a debt to all those who collected them; from the Far and Middle Eastern writers whose names are so often lost to us, to the likes of Antoine de la Sale, the 15th century French writer who wrote Le Cent Nouvelles Nouvelles, also called The Hundred New Tales. He borrowed from Boccaccio and Chaucer just as they had borrowed from others and included comic tales that served to entertain.

Stories like the one about a foolish man who goes to a doctor in the hope of getting a medicine that will help him find his lost donkey. The doctor duly prescribes the fool a potion that makes him fart so loudly and so long that it sounds like a donkey braying and so attracts his own beast! It is a story that made many a medieval person laugh long, loud and lustily long ago and it still has the power to amuse today, especially children who love fart jokes when many a grown up does not. 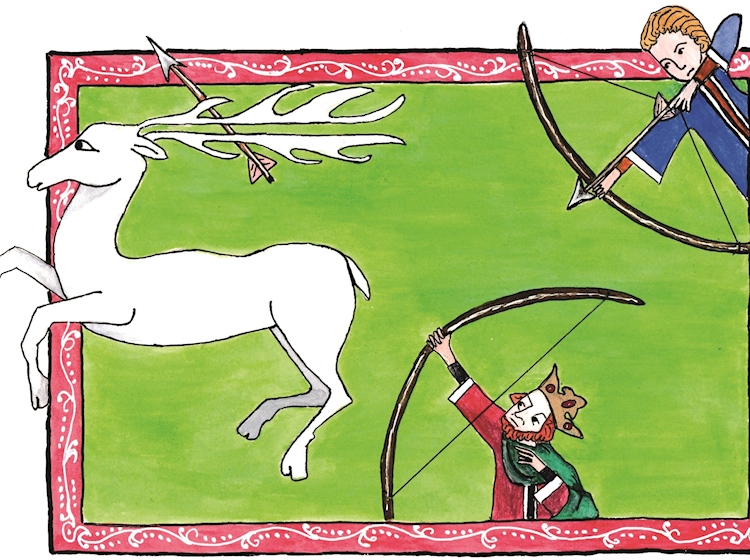 For remember what I said at the start of this article; stories grow in the telling as they evolve and change over time, a continuing process that has seen many of these tales originally collected for the edification and entertainment of learned men and women, now adapted for children. Stories that can show young readers and listeners something of the ways of our medieval ancestors while also demonstrating that we share our stories with other countries. They remain an important lesson in these times when so many seek to reject other cultures; reminding young and old alike of what we still have in common with the rest of the world.