Imagination is a powerful thing. The beauty of it is that everyone’s imagination is unique. Different people can look at the same picture of a monster in a medieval book and come up with completely different stories. Have you ever looked at a picture and felt inspired to make up a story?

Norfolk folklore is roaring with monstrous mayhem and mischief. Legends of mighty beasts and curious creatures are handed down over time to enchant, delight and oh yes…fright! Dangerous dragons breathe fire and chaos. Depictions of the dragon from St George and the Dragon can be seen throughout Norwich from a wall painting in St Gregory’s Church Pottergate to a medieval dragon residing in a beam of Dragon Hall, King’s Street. You can almost hear them roar!

Tales are told of Black Shuck, a ghoulish deadly dog with furious fangs and flashing eyes who prowled the East Anglian countryside hunting for trouble.

Even animals we see today have been historically imbued with mythic qualities, crystallized in our collective memory as symbols of power or ancient wisdom to be revered. Legend tells of an animal favoured by a brave Iron Age warrior, Boudica, who led the Iceni tribe as they rebelled against Roman rule. Boudica is said to have sent a hare onto the battlefield to guide her before the fight, the little creature was believed to hold mystical charm. 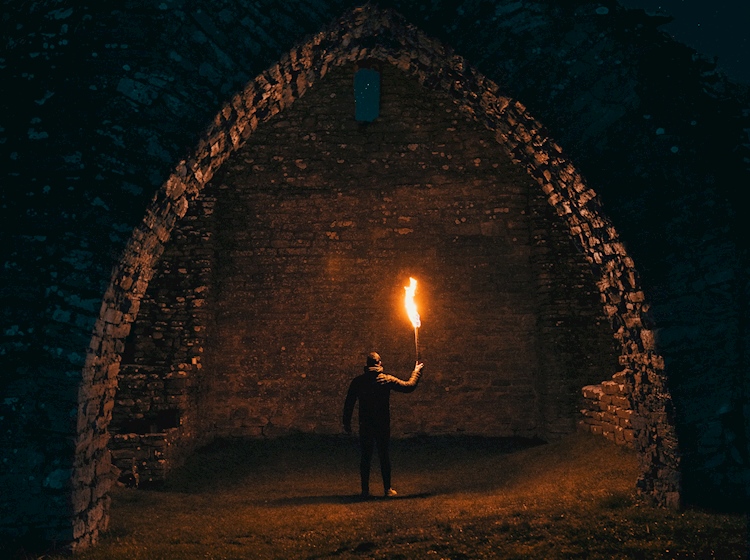 Just what is our historic fascination with all things fantastical? As a storyteller I speculate that one reason may simply be because these stories are tremendous fun. However there may be more to these frightful fiends and bonkers beasts than first meets the eye. Monsters serve a meaningful purpose for humans, particularly in our early years.

Children’s stories are a vital part of our development, our first encounters with this world, baffling, bemusing and wild. These stories are a gentle introduction to the complexities and challenges of life, from the comfort of our beds it is safe to explore dark woods where wicked wolves lurk. Fairy tales once served a practical purpose, they cautioned children about the dangers of straying from the path into the unknown.

Monsters prepare us for conflicts and obstacles yet to be overcome, instilling courage and resilience. Perhaps more profound, monsters may help us to build character, reminding us of the more difficult aspects within ourselves: selfishness, greed, and jealousy that we may wrestle with as we grow. Having grown up with imaginative tales of monsters from J.R.R Tolkien’s The Hobbit to Roald Dahl’s Revolting Rhymes I was keen to find out more about Norfolk’s own fang-tastic history.

Norfolk did not fail to bite!

At Norfolk Heritage Centre, on the second floor of Norfolk and Norwich Millennium Library I discovered an astonishing medieval book. The book provided intriguing insight into the innovation and creativity of medieval minds. The crinkly old pages captured and chronicled pictures of peculiar creatures. After all, the medieval world was full of natural phenomena that needed to be explained. How better to make sense of it it then through pictures of strange fish with supernatural powers, of giant birds with spectacular killer beaks, of twisted hybrid creatures that merged both man and serpent?

Thankfully, these days we have science to explain natural phenomena and the unpredictability of the elements. Natural history documents the wondrous creatures of this earth throughout the ages. Unsettling mysteries, pervasive peculiarities, things that go bump in the night can be explained through facts, reason and rationale. We can rest assured that there is no need to worry, no need to check the cupboard before bedtime, monsters never did and absolutely do not exist. No chance. No chance at all. Right?

Reviews of Emelia Moorgrim and the Medieval Monsters of Norfolk:

“Emelia Moorgrim and the Medieval Monsters of Norfolk brings the region’s history to life — quite literally — as a cavalcade of fantastical creatures leaps from the pages of an old medieval manuscript to wreak havoc through time. Emelia’s knockabout adventures are fast paced and told with energy and humour. Each chapter is embroidered with period details and ends with a bitesize summary that puts Emelia’s shenanigans in their historical context. A light, zany romp which also manages to make a case for the importance of storytelling and imagination in communicating history to future generations.” – Ben Manley, award-winning children’s author.