Medieval England: Filling in the blanks

One of the challenges of writing historical fiction is making sure you get your facts right: nobody wants to read about medieval peasants wearing digital watches or historical characters taking centre stage at a time before they were actually born. But one of the other challenges is almost the opposite: what do you do when ‘the facts’ simply aren’t available?

Let us take, as a random example, the invasion of England by Prince Louis of France in 1216–17, and the actions of the English barons who either supported or opposed him. In the case of William de Warenne, earl of Surrey, we know three things for definite, because they are documented in official records: he was on King John’s side in 1215, he defected to Louis in 1216, and then he returned to the English royalist party in 1217. But further than that we do not know. Why did Warenne vacillate? At what exact point did he make these decisions, and what were his motivations? How are we to fill in the blanks?

The writer of historical non-fiction might speculate a little, but can effectively only note the matters of record and then add ‘but we don’t know why’. The historical novelist, of course, can make it up – but only in a manner which is plausible. To find out what was plausible we can read around the subject: to discover, for example, what lands and honours Warenne held, how he might have been advantaged or disadvantaged by siding with either party, who his relatives were, who his friends and allies were, and so on. We can do this not only by reading secondary works (that is, books and articles written by modern historians), but also primary ones: official records of the time, and chronicles and other works written by contemporaries. Once we have a grasp of all this, we can insert our fictional characters and our fictional ideas to make up a story about what happened. 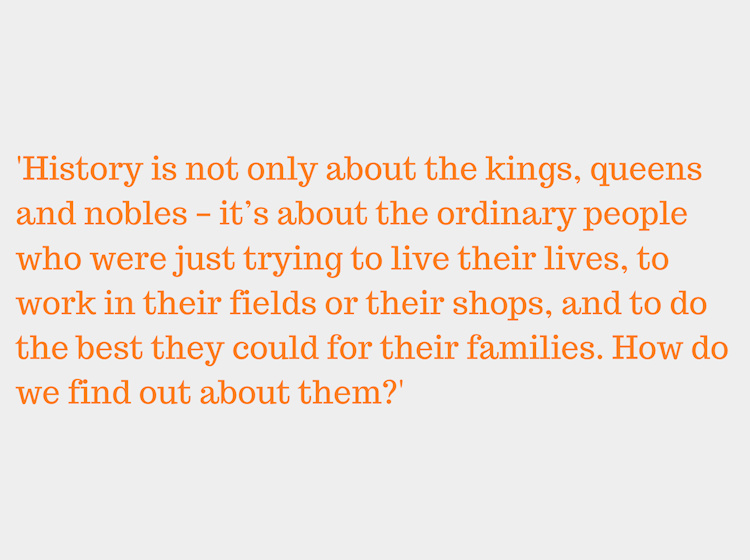 The glaring problem with all of the above is that most of the primary sources tend to talk about those who were at the top end of the social scale: what we might now call the one per cent. And history is not only about the kings, queens and nobles – it’s about the ordinary people who were just trying to live their lives, to work in their fields or their shops, and to do the best they could for their families. How do we find out about them?

Here the records can be more difficult to find. Sometimes we strike lucky, such as with the surviving medieval court rolls of Conisbrough, which tell us of real individuals who were fined by their manor court for brewing sour ale or letting their pigs run loose. The novelist’s imagination can seize on some long-ago, long-forgotten incident and weave a story around it.

There are other, more practical ways in which we can find out how people lived their everyday lives. Want to know how hard it was to sew by hand, by candlelight, before electricity was available? Try it yourself. Want to know what it feels like to wear a claustrophobic great helm? Find a friendly re-enactor and try it. Having that experience makes you much more able to write about it. Of course, this is not a solution for every situation: don’t try starving through the winter because your crops failed, and please don’t try being run through with a sword on a battlefield to see what it feels like! 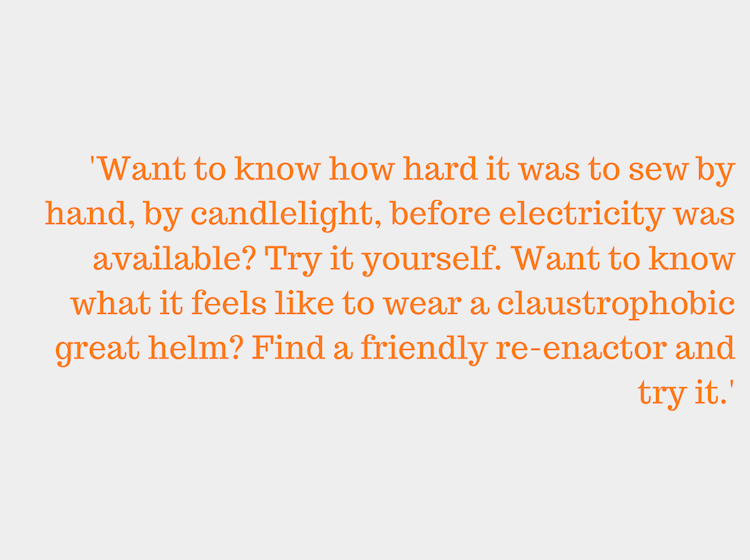 Objects and places can also be very evocative for the historical novelist, as any wander around a castle will tell you. We are fortunate in the survival of many artefacts from the Middle Ages, and the shoe discarded in a river can be just as useful for research as a jewelled crown in a museum – indeed, more so if you happen to be writing about a character who wore shoes but would never get near a crown.

The most important thing, though, is to get under the skin of your characters in order to make them real, living, breathing people of their time. It’s tempting, if your characters are historical, to make them empathetic to a modern audience by giving them modern thoughts and opinions. But this is a lazy shortcut: it might make your characters superficially attractive to readers, but what you end up with isn’t credible historical people, it’s modern people dropped into a historical setting. 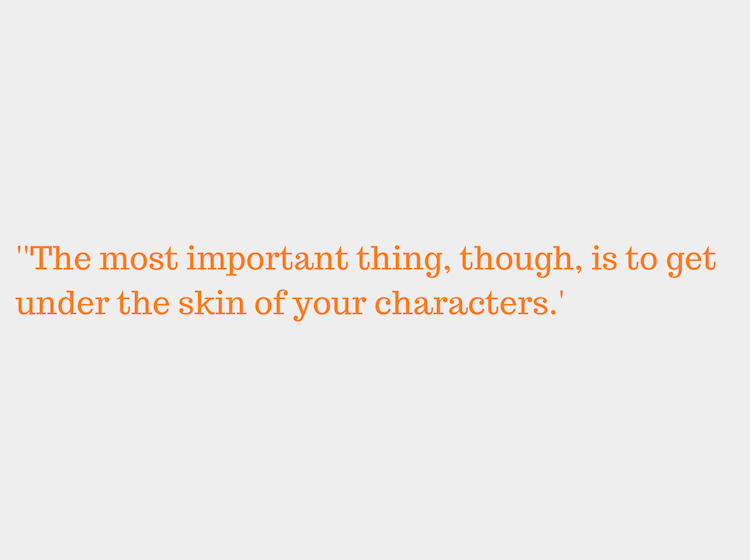 So how do we fill in these rather more nebulous blanks? The answer, once again, is to go back to primary sources. This enables us to find out what people were saying and what their opinions were at the time in question. And by primary sources, I don’t just mean grants and charters, or even chronicles: reading contemporary literature – the fiction of its own day – is just as important, and finding out what people thought of as a good story, or who they considered to be heroes and villains, can tell us as much about their lives as the information we might consider more ‘factual’.