Having studied the psychology of advertising and subsequently secured work as a copywriter in my early writing career, I was more than aware of the manipulative edge to the media messages we consume every day. My work on Fading London: The City’s Vanishing Ghost Signs however, underlined even more fiercely the shift in the advertising landscape over the last hundred years or so.

The signs photographed are largely typographical and tend to focus on brand awareness. i.e. keeping the name of the product and  manufacturer front and centre in bold lettering. The hand-painted advertisement below for the Donavon Brothers is a perfect example. The sign stands at 46 Crispin Street where a Mrs Deborah Levington dealt in paper bags in the 1930s. 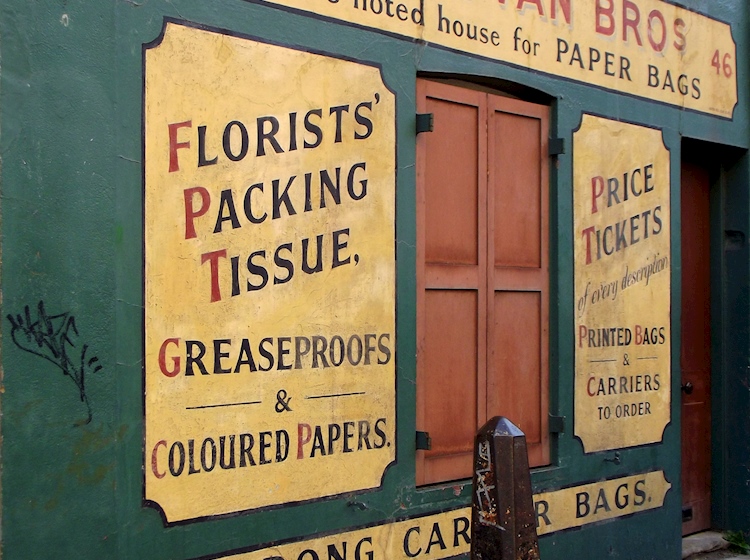 This signage is in stark contrast to the kind of advertising we are exposed to today. After the fiscal crash of 2009, perhaps banks feel they need to be more calculating about how they advertise their services. Whether it’s photographing horses against a stunning natural backdrop or hijacking your favourite childhood cartoons however, these devices seem to be doing all they can to distract from the hard reality of these companies rather than keep their brand at the centre of the advertising message.

And banks are not alone.

Certain food brands claim to feed your soul as well as your tummy. Department stores create entire animated narratives set in fantasy worlds while supermarkets set adverts in Dickensian London. You can usually tell you’re experiencing this kind of media manipulation when you get twenty seconds into watching the advertisement and still have no idea what the advertised product is.

Has advertising become more devious then? Was the early 20th century a more innocent media age than the early 21st century?

Although in the pre-TV age, advertisers were arguably more straight-up about what they were advertising and kept the product at the centre of their message, there were still a few tricks used to try and sway the consumer. 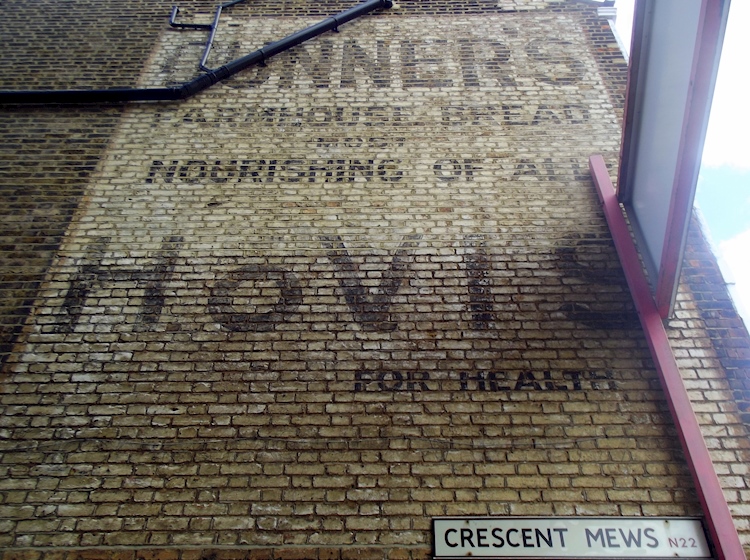 This sign for Hovis bread, visible at 26 Palace Gates Road, offers some insight into the kind of tactics favoured by advertisers of the time. This sign claims that the bread is ‘most nourishing of all’ and ‘for health’. Claims of being the best of a particular product niche are quite common across the ghost signs that remain in London, and ‘most nourishing’ certainly falls into this category. It was perhaps deemed a sound strategy because, save everyone eating your bread coming down with some kind of illness, at the time it was pretty impossible for anyone to scientifically refute these bold claims.

The ‘for health’ line also betrays a common advertising approach at the time which was to claim the product in question had healing properties or was in some other way good for you.

This sign at 18 Upper Tooting Road for Meggezones pastilles and cough tonic also uses the same two approaches as the Hovis signgage, though arguably when advertising a medicinal product the claims of improved health make a bit more sense. 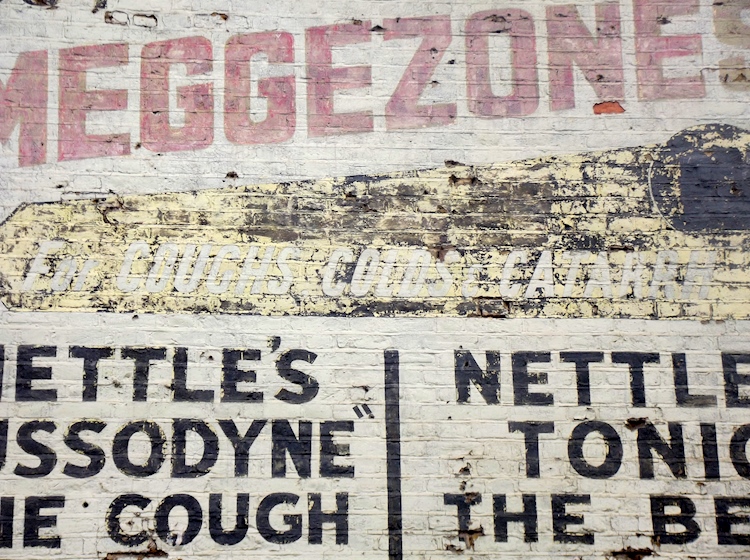 The above are a couple of examples of the kind of messages employed by early 20th century advertisers. Sometimes, if images were used, a little more manipulation might be at play - such as a young girl stroking her father’s cheek after a close shave with a Gillette razor. The fading advertisements captured in my book then, are not those of a completely innocent age, but arguably of a more innocent media age than the one we experience today.

With so many varied marketing messages floating around in the world of infinite cyberspace perhaps media messaging has been forced to adapt but given this shift, if we aren’t already, it may help our cash flow if we question whether we’re buying a product on its own merit or if we have been seduced by a cynically sentimental advertising campaign.