The 1908 Olympic Games were originally awarded to Rome. Rome had been chosen in the belief that its fame and accessibility would encourage competitors to attend from all over the world, particularly as attendance at the last Olympics, St. Louis in 1904, had been disappointing. However, Italy was already behind on its preparations and when Mount Vesuvius erupted in April 1906 Italian authorities announced that they would have to divert resources into disaster relief and the rebuilding of Naples. The International Olympic Committee (IOC) invited Britain to step in as host.

Despite the short notice, the Games were exceptionally well organised. The challenge of organising the Games with barely two years’ notice was accepted by Lord Desborough, the dynamic chairman of the British Olympic Association, with support from King Edward VII. Aristocrat Desborough was a formidable force, having climbed the Matterhorn, rowed for Oxford in the boat race and swum across the base of Niagara Falls and he was able persuade the organisers of the Franco-British Exhibition of 1908 to fund and build a stadium next to their west London site in return for a share of gate receipts. The exhibition organisers even donated £2,000 towards the stadium’s running costs!

The cover of the 1908 Olympic Games programme

In total, 12 sports venues were used for the Olympics across London, but this was the first time that a stadium had been specially prepared for the Games and that swimming would not take place in open water. The grandstands were designed to accommodate 66,000 spectators, but the stadium could actually hold up to 130,000 standing on terraces. The area of west London where the stadium was situated soon became known as ‘White City’ taken from the marble cladding used on the exhibition pavilions.

Completed in just ten months by George Wimpey, the stadium included running and cycle tracks, an open-air swimming pool and facilities for track and field athletics such as a pitch for football, rugby, hockey and lacrosse. Unfortunately, as it turned out, the summer of 1908 was a washout, with heavy rain turning the infield of the stadium into a mudbath. The swimming pool also got swampier as the Games progressed, and by the end of the swimming events the water was so murky that competitors were colliding with each other.

The Olympics ran from 27 April to 31 October 1908, the longest ever, and involved over 2,000 competitors from a record 22 nations – more than three times the number who competed at St. Louis. The 1908 Olympics were the first Games to award gold, silver and bronze medals (previously some winners had received only a diploma) and the first in which all entrants had to compete as a member of a national team, rather than individually. It was also the first to include winter events (figure skating events were held in October, months after the other events) and in which women were allowed to compete – 37 women were amongst the competitors – although Pierre de Coubertin, the founder of the IOC, was opposed to their participation. Qualifying rounds and a limit on the number of competitors any one nation could field were also instated.

Events included, for the first time, diving, field hockey and a relay, with athletes running the 200m, 400m and 800m ‘Olympic relays’. Less successfully, powerboat racing and tug-of-war made their first and last appearances at the Olympics in 1908, the latter dominated by British police teams who took home the gold, silver and bronze medals. 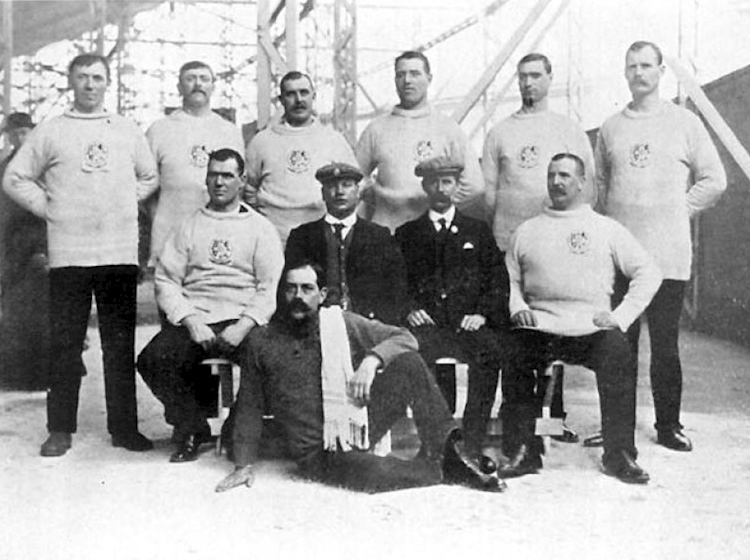 Tug-of-war team of the City of London Police, winner of the gold medal at the 1908 Summer Olympics

The 1908 London Olympic Games were not without controversy, however, as international politics and contentious judging reared their heads on several occasions. The problems began in the opening ceremony, the first time at the Olympic Games that delegates had paraded behind their country’s flag in sportswear. The Finnish team refused to carry a flag when they were told they would have to march under the standard of Tsarist Russia and Irish competitors were ordered to compete for Great Britain, causing many to withdraw. The United States, whose flag had been inadvertently omitted from being displayed above the stadium, retaliated by refusing to respectfully dip the Stars and Stripes as they passed the Royal Box. This was a precursor of several arguments between the Americans and their British hosts who, by agreement with the IOC, provided all the judges and timekeepers. Americans lodged complaints of biased judging and bemoaned that British rules were applied to events. The tensions reached a climax in the final of the 400m, which was contested by three Americans and one Englishman, Wyndham Halswelle. The final was won by American John Carpenter, but he was judged to have obstructed Halswelle and was subsequently disqualified and a re-run ordered. In protest the Americans refused to take part so Halswelle ran unopposed to secure the gold medal. Captain Wyndham Halswelle was killed by a sniper at the Battle of Neuve Chapelle in the First World War.

More controversy followed in the marathon, held on the final day of the competition. In previous Olympics the length of the marathon had been around 40 km (24.85 miles) but in 1908 a 42 km (26.10 miles) course was decided upon, starting at Windsor Castle (as the King had requested that his grandchildren see the start of the race) to White City Stadium. An additional 195 metres was added on to the end to enable the runners to finish in front of the Royal Box. The total distance of 42.195 km became official in 1921 and has been used as the standard distance for the marathon since the 1924 Games.

In 1908 the marathon runners followed a route from Windsor Castle through Stoke Poges, Ruislip and Wormwood Scrubs to the finish at White City and the race’s dramatic ending caught the public’s attention. Italy’s Dorando Pietri was the first of the 75 marathon runners to enter the stadium, but it was immediately apparent something was wrong. Dazed, he headed in the wrong direction around the track, tottering towards the finish tape, but he collapsed more than once and to be helped by race officials to his feet. Applauded by the 90,000-strong crowd, he was still the first to reach the finish line but was disqualified and stripped of his victory for receiving outside aid. The gold medal was thus awarded to the next competitor to cross the line - Johnny Hayes, the youngest member of the US team. Although some eyewitness accounts have suggested that Pietri may have had the odd swig of brandy proffered by spectators around the route, his plight touched the hearts of public and the following day Queen Alexandra presented Pietri with a gold cup as a special consolation prize.

Italy's Dorando Pietri was first to cross the marathon finish line, but he was disqualified for receiving help from race officials

As a result of all the controversies, changes were made for future Olympics and other major sporting events. Track and field rules were standardised, the IOC appointed officials from an international pool rather than leaving it to the host nation and the 400m was run in lanes at the 1912 Stockholm Games.

The Games ended on 31 October 1908, returning a small profit to the organisers as well as bequeathing a stadium to London which continued to be used for a variety of sporting events until 1985 when it was demolished to make way for new BBC premises. The event also set the bar for future Olympics with Team GB topping the medal table for the only time with 146 medals in total - 56 golds, 51 silvers and 39 bronzes.