No other city comes close to London in the world of literature. Its streets, parks and buildings have provided homes for its authors, inspiration for their imaginations and settings for their stories.

In the fourteenth century London provided Chaucer with a home above Aldgate from where he observed the procession of protesters against the poll tax entering the City in 1381 in the early stages of the Peasants’ Revolt. It also provided him with a job, as collector of customs dues for King Edward III; and across the river, in Southwark, his pilgrims set out for Canterbury from the Tabard Inn which survived until 1873, its site now marked by Talbot Yard off Borough High Street on the approach to London Bridge. The George Inn, nearby, is the only galleried inn remaining in London and serves as a proxy for the Tabard which is itself featured in Little Dorritt.

This small area of London, often overlooked by visitors, has other literary treasures though one of them would not be recognised as such by its most famous associate. This is the site of the infamous Marshalsea or debtors’ prison where John Dickens, father of Charles, was long a resident while Charles, to his everlasting shame, was sent to work in Warren’s Blacking Warehouse near the present site of Charing Cross station. The Marshalsea is a prominent feature of Little Dorritt and also provides a home for one of the novelist’s most memorable (and improvident) characters Wilkins Micawber in Dickens’s semi-autobiographical novel David Copperfield, considered by many to be his greatest work.

Nearby is a memento of an even more famous writer. Shakespeare’s Globe on the south bank of the river was the creation of the American actor Sam Wanamaker who, disappointed that he couldn’t visit the original Globe (it burned down in 1613) decided to rebuild a replica as close as he could to the original site. The foundations of the original theatre may be seen in the courtyard of some expensive flats in Park Street a few yards away.

Walk on a few more steps and you find yourself in Southwark Cathedral which holds the tomb of Lancelot Andrewes, Bishop of Winchester and one of the principal translators of the Authorised Version of the Bible (the ‘King James’ Bible). On Christmas Day 1622 Andrewes preached before King James himself, the opening words of his sermon being a reference to the three wise men who went to Bethlehem:

“A cold coming they had of it at this time of the year, just the worst time of the year to take a journey, and specially a long journey. The ways deep, the weather sharp, the days short, the sun farthest off.”

These words were placed by T.S.Eliot in the mouths of the three wise men at the opening of his poem ‘The coming of the Magi’:

A cold coming we had of it,

Just the worst time of the year

For a journey, and such a journey:

The ways deep and the weather sharp …

Re-crossing the river, Westminster Abbey contains more literary monuments than any other building in the world. Geoffrey Chaucer was buried in the Abbey in 1400 not because of his poetry but because he had been a civil servant – clerk of works to the Palace of Westminster. But his burial led to the creation of Poets’ Corner with hundreds of memorials from including those to Shakespeare and, in our own time, to Ted Hughes. Other notable burials in the Abbey include those of Charles Dickens, the actor David Garrick and the composer George Frideric Handel as well as scientists like Isaac Newton and Charles Darwin. St Paul’s Cathedral has a fine monument to one of its former deans, John Donne as well as memorials of William Blake and T.E. Lawrence.

A lesser-known City church is St Giles-without-Cripplegate. This charming little medieval church amongst the towers and concrete of the Barbican contains the tombs of John Milton and of John Foxe, author of Foxe’s Book of Martyrs, as well as that of Sir Thomas Lucy, lampooned in The Merry Wives of Windsor as Justice Shallow. It also witnessed the baptisms of the children of Edmund Shakespeare whose rather better-known brother William lived nearby and is believed to have stood as their godfather.

The George Inn, Southwark, the only surviving galleried London coaching inn
Remaining wall from the notorious Marshalsea prison in Southwark 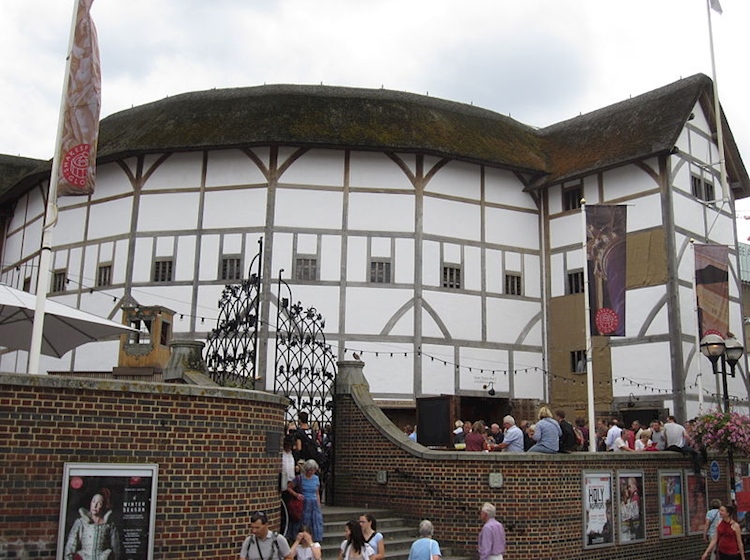 Shakespeare’s Globe, a reconstruction of the Globe Theatre, an Elizabethan playhouse in London
Southwark Cathedral, taken from the 24th floor of an office building above London Bridge station
Memorials in Poet’s Corner, Westminster Abbey 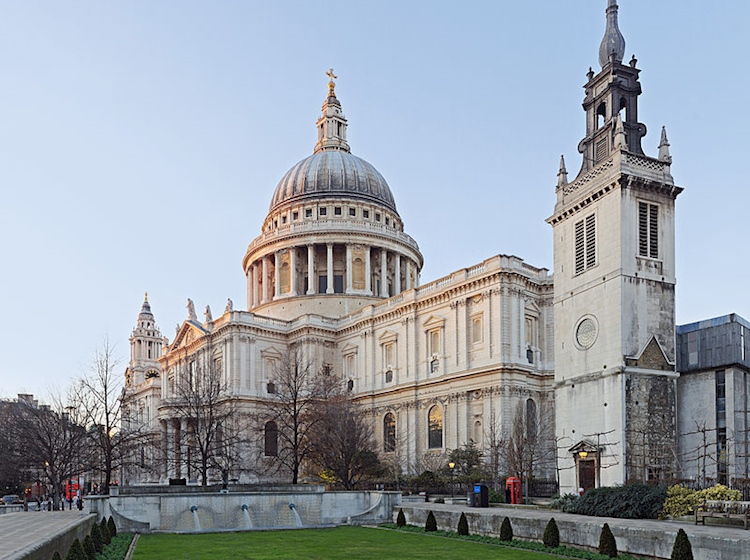