Kerry: A kingdom worthy of the name

Kerry is the most westerly county of Ireland, in the far south west and it has long played an important role in Ireland’s history. Although humans arrived in Ireland some six thousand years earlier, the earliest clear evidence of farming in Ireland was found at Ferriter’s Cove on the Dingle Peninsula, where a flint knife, cattle bones and a sheep’s tooth were discovered, dating from approximately 4350 BCE.

Even today county Kerry is full of megalithic monuments such as burial tombs and stone circles, as well as later monuments and ring forts from the copper and bronze age. The Dingle peninsula, also known as Corca Dhuibhne, is reputed to be where the Celtic Milesians (Sons of Mil) arrived and where they fought and defeated the Tuatha Dé Danann to successfully establish the culture from which the Gaelic people of Ireland were descended. In fact, Mil’s Egyptian wife Scotia, whose descendants went on to give her name to Scotland, died fighting the Tuatha Dé Danann and she is reputedly buried along with her horse just outside Tralee. The stones marking the graves are still there today and an obelisk memorial, not far from the site was erected a few years ago, created by local stonemason Billy Lean and artist Elena Danaan.

This and other great battles occurred in the Sliabh Mish mountains which were named after Mish the princess who according to legend lived to great age as a wild woman on top of the mountains. Caherconree a mountain peak in this mountain range is home to the remains of a ringfort called Bóthar na gCloch (road of the stones) which is bordered on three sides by steep cliffs and was the fort of Cú Roí Mac Dáire, a great king and warrior with magical powers, who was killed by the famous Ulster hero Cú Chulainn. At the end of the Sliabh Mish range lies the Conor Pass, near Dingle town, which is Ireland’s highest mountain pass and Mount Brandon, which has been a sacred mountain since Pagan times and is still visited by pilgrims today. 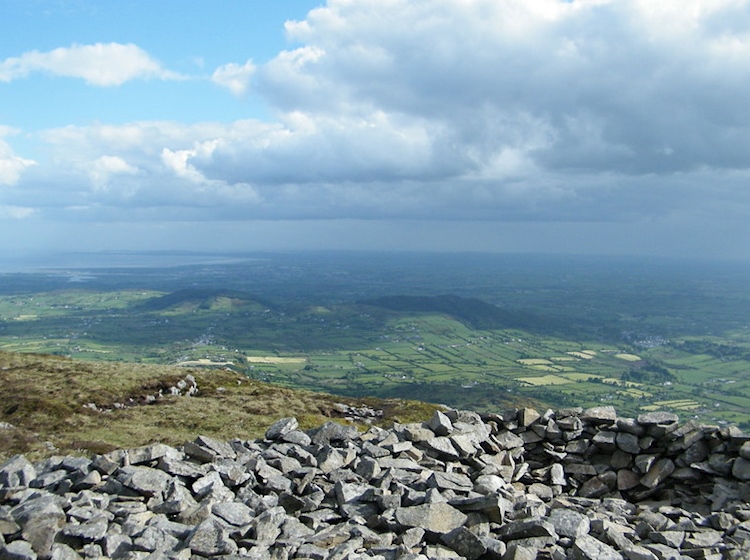 As well as these mountains, Kerry possesses the MacGillycuddy Reeks range, which features Carrauntoohil, Ireland’s highest mountain, at 1040m tall. The MacGillycuddy Reeks, close to Killarney, stretch across 12 miles of the Kerry countryside and also includes Ireland’s second and third highest mountains. This range is also home to Ireland’s highest lake, Cummeenoughter, which is also known as ‘The Devil’s Looking Glass’. The famous mountains the ‘Paps of Anu’ in east Kerry, overlook Cathair Crobh Dearg, or ‘The City’ which is possibly one of the oldest sacred settlements in Ireland, which has given rise to a wealth of legends featuring giants, St. Brendan and the Red Branch Knights, during its long history.

County Kerry has been referred to as ‘The Kingdom’ since the 1st century AD when the O’Connor chieftan Ciar took control of the territory between the Shannon esturary and the Maine river in the south. Before this, the territory was known as Clar na Cliabh or The Plain of Swords, but thanks to the O’Connors it became known as Ciar Raigh which translates as ‘Cair’s kingdom’ or possibly ‘Cair’s people’. Ciarraigh later became anglicised as Kerry, but was still referred to as ‘The Kingdom’ ever since. It is also said in Kerry that, “There are only two kingdoms, the Kingdom of God and the Kingdom of Kerry.”

Kerry has a rich history dating from before the Norman invasion and continuing into modern times – from the exploits of the Fitzgerald dynasty, the famous Earls of Desmond, right up to the War of Independence and the Civil War. Kerry is also a treasure trove of folk customs, superstitions and stories, such as belief in the Pooka (púca), curses, the fairies (sídhe) and various traditions relating to good and bad luck associated with the fireplace or days of the week. Kerry is home to Ireland’s oldest known fair, the Puck Fair (which is some 400 years old) that takes place every August in the small town of Killorglin. Kerry is also home to Ireland’s oldest surviving thatched cottage (about 300 years old), at Finuge Cross, near Listowel town. 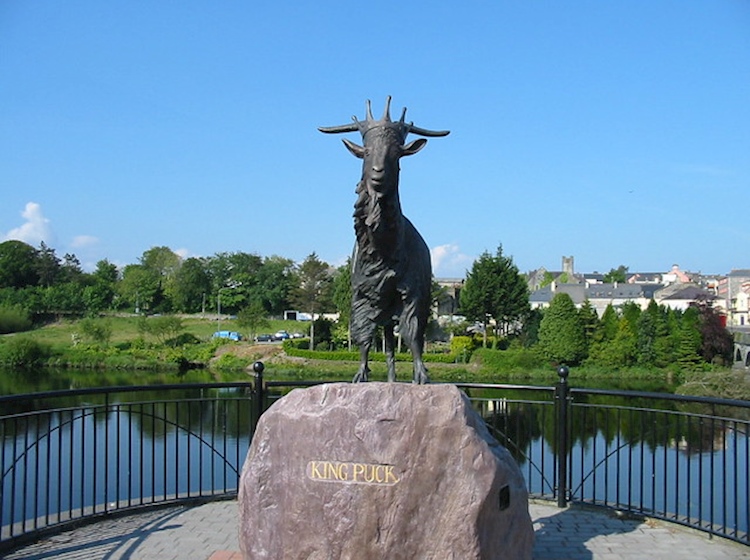 King Puck, the goat after which Puck Fair is named

Anascaul, on the Dingle peninsula was the home of Tom Crean, one of the greatest explorers of the Antarctic, who was a colleague of both Scott and Shackleton on several freezing and highly dangerous voyages of exploration in the early twentieth century. Kerry was also home to several heroes of the Irish revolution, including Roger Casement and Michael Rahilly (The O’Rahilly) both of whom lost their lives as a result of their brave actions.

In the modern era Kerry was known as a favourite place of comedic film star Charlie Chaplin, who holidayed in Waterville for many years in his later years, as well as ancestral home of Pierce Brosnan the famous actor who starred in James Bond movies as well as many other successful films. It is also famous as home of the Rose of Tralee festival, that attracts people from all over the world, not to mention the location for famous films such as Ryan’s Daughter and several of the Star Wars films.

Both now and in the ancient past Kerry has been a vibrant and interesting place, with a history that few regions of the world can equal. With its stunning scenery and rich cultural heritage no wonder it is one of the most visited parts of Ireland.

The Little Book of Bray and Enniskerry

The Little Book of Donegal

The Little Book of Westmeath