How militant were women’s suffrage campaigners in Gloucestershire?

February 6 1918 was a landmark date for all those who had fought for women’s parliamentary votes. On that day, an Act of Parliament gave most women over the age of 30 the right to vote. A huge milestone but, given that all men over 21 were enfranchised at the same time, not as huge as some campaigners had hoped for.

In Cheltenham and the surrounding area, including the towns of Cirencester and Stroud, there had been campaigns for the vote, particularly in the early years of the 20th century. Many of those who had supported them would have been disappointed by this outcome, particularly young middle-class women living with their parents.

How militant had these women been? Most people have heard of the more militant suffragette activities and may have seen them graphically depicted in the 2015 film Suffragette starring Carey Mulligan and Meryl Streep.

Leading figures in the Suffragette movement including Emmeline Pankhurst

Gloucestershire did not witness scenes such as these but there was one major case of arson when, in December 1913, the empty Alstone Lawn manor-house in Cheltenham was set ablaze by two suffragettes who toured the country trying to inflict similar damage. They were easily caught, tried and jailed in Worcester but released early when they went on hunger-strike. No woman living in the area was involved in such extreme militant activity but Cheltenham yielded two prisoners for the cause!

Madame Lilian Borovikovski (nee Prust) had been living in Cheltenham with her widowed mother before marrying a Russian diplomat/government servant. She was a member of the militant but non-violent Women’s Freedom League, which was well-organised in the town. In 1909, when her son was only 4, she went to London to attempt with others to get Prime Minister Asquith to accept a petition on women’s suffrage. As a result, she was charged with obstructing the police and sentenced to a month in Holloway Prison, and was hailed as a heroine on her return to her Cheltenham colleagues. 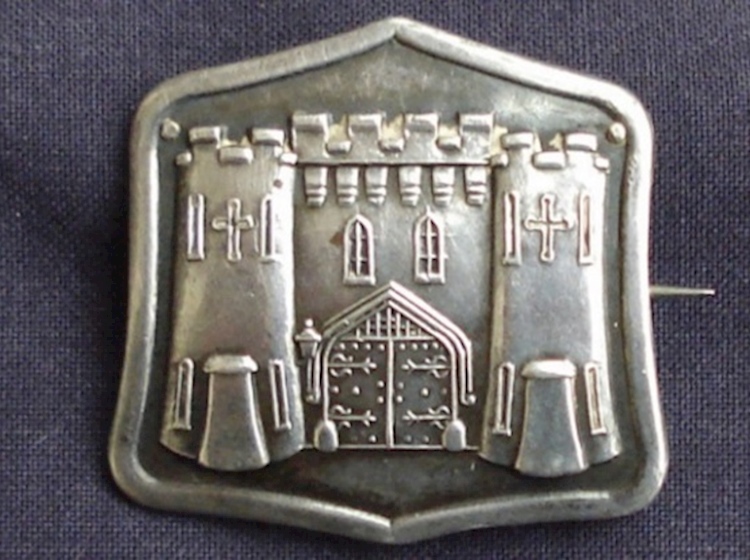 A badge like the one presented to Mme. Borovikovski to honour her time in prison

A much more minor offence was committed in Cheltenham itself by three women from the local Women’s Freedom League. In February 1913, they were charged under the Post Office Act with placarding pillar boxes in the centre of the town. These were placards urging women to ‘Dare to be free!’ and a patrolling policeman had caught them with incriminating evidence. Only one of them was imprisoned as the other two were able to pay the fine of 10s. or have their goods distrained. Agnes Bales, a clerk to a fine art publisher, was sentenced to fourteen days’ imprisonment, but it is not clear where she served this sentence. Hardly the stuff of extreme militancy but this is a good local example of the authorities becoming increasingly nervous about women’s activities and determined to stamp out even the most minor defiance of the law.

However, no authority was able to stop the women who risked a fine of £5 and public condemnation by evading the 1911 census. Their protest, led locally by the Women’s Freedom League and the Women’s Social and Political Union (the Pankhursts’ suffragettes), aimed to show the government that, if women were not regarded as citizens, then they should not be counted as such. It is sometimes difficult to establish ‘absence’ but I have evidence of 53 individuals in Cheltenham evading the census. (These were mainly women but also their children and servants plus at least one man.)

Letters to the press and an appeal by the Mayor to conform were all ignored. The two militant organisations were not active in Cirencester or Stroud at the time and no evaders have been identified. That is not to say that they are not lurking somewhere.

So far, a picture of ‘mild’ militancy has been presented. But it must be remembered that every meeting, public speech or appearance made by women in the early years of the 20th century was open to attack, verbal or physical. Women were not meant to occupy the public spaces which men had for centuries monopolised. Debate had taken place about whether a woman could appear on a public platform and still be a ‘woman’ – or ‘a lady’. In a sense, therefore, every women’s suffrage event could be classed as an attack on the male bastions of power. That means that all the meetings, peaceful demonstrations, letters to the press, meetings with MPs and the very organisation of women’s suffrage societies, from the largest in Cheltenham to the smallest in Nailsworth or Winchcombe, might be seen as threatening. The National Union of Women’s Suffrage Societies, the suffragist non-militants, had branches in Cheltenham, Cirencester, Stroud, Tewkesbury and Winchcombe, and Nailsworth. The Conservative and Unionist Women’s Franchise Association had flourishing branches in Cirencester and Cheltenham. Through these, many women (and men) made their opinions known to the wider community and their presence was vitally important to the national campaign.

The story of the battles fought by the women of Cheltenham and the Cotswolds is fascinating in its variety and, through the discovery of an amazing and previously untapped, resource, I have been able to uncover the many women (and men) who lent their support to the local movement without necessarily being activists.