Health warning: singing and dancing can be dangerous

Musicians of all kinds play for dancing in many different styles. Throughout history minstrels, bards and local fiddle players have performed tunes when there was a celebration.

From looking at folk tales we can see that music and musicians divided generations in the past just as much as they do today. Musical fashions didn't change so much or so rapidly but new trends weren't welcomed and parents seemed to forget that their parents had said the same when they were young.

Pete Seeger, reputedly, threatened to take an axe to the power supply when Bob Dylan plugged in.

TV programmes were not allowed to show Elvis Presley below the waist because his moves might corrupt the young!

Even the waltz was outrageous when it was first introduced because couples danced it touching, face to face.

Parents have always been terrified that their daughters might run off with one of these musicians. That was true in the 1960s - witness the screaming hoards who greeted the Beatles wherever they went as illustrated in the film A Hard Days Night - and equally true 500 years ago when the ballad about the Raggle Taggle Gypsies-O was written: the Lady, with a strict husband she doesn’t love, lonely, locked up in his castle, is seduced when a gypsy comes singing outside her door and they elope to a life of freedom.

But what of the musicians themselves? Why are they doing it?

Young people probably dream of fame and fortune and might go into music seeking that but only a tiny minority of musicians achieve it, and it is often at a terrible price. Think of all those pop stars who have had all their earnings stolen by unscrupulous managers—or the tax man; have died from drug or drink overdoses; have been killed in accidents whilst travelling to or from gigs. It can be a dangerous life!

There are many folk tales which tell of the perils of life on the road. Interestingly it is usually on the way home from a gig rather than on the way to it that things happen. On the way you are focused and have your wits about you, looking forward to the event. But on the way back in the early hours of the morning you might be packed with adrenaline and willing to take risks, high on drink or drugs, tired and not concentrating, and so you don’t see the danger until it is too late.

In old tales the unwary musician might be enticed in to play for fairies and then wake up to find that hundreds of years have passed; he might be paid a handsome sum for his playing but, in the morning, find that the gold coins have turned into dead leaves; he could meet and help a stranded mermaid who promises him a life of luxury in her world beneath the waves, but it never happens; he might, more prosaically, just get lost or take a short cut which almost leads to his death.

Perhaps he crosses a boundary into another world...

These events seem like pure fairy tales but something like them has happened to most travelling musicians. The mermaid who betrays you might, in real life, just be a hitchhiker but the outcome is the same.

The dangerous shortcut can be very real even in these days of sat navs, and the ‘fairies’ who offer you a bed for the night and rob you of everything are not too difficult to find. A hundred years ago the itinerant musician was probably on foot, which you would think would be more dangerous, but driving home late at night and falling asleep at the wheel is amazingly common.

Musicians of all kinds play for dancing in many different styles. Throughout history minstrels, bards and local fiddle players have performed tunes when there was a celebration in the village hall, or when the Lord of the Manor held a garden party to celebrate a family event. They played alone or with regular collaborators.

Many of these players were self-taught and had no knowledge of music theory. That doesn’t mean they weren’t hugely talented and accomplished players though (for a present day parallel listen to any of the East European gypsy bands who are now internationally known—Fanfare Ciocarlia or Taraf de Haidouks—for instance.)

These local musicians served their community in much the same way that a plumber or a roofer or a carpenter would work – not considering themselves great artists, just doing what their employer wanted.

They had to have a wide ranging repertoire and know what to play where and when. The tunes played and dances done at the Manor would be different to those used at a knees-up in the barn. They had to be aware of the rules—both the written and unwritten ones. If their contract said ‘Play until midnight on Saturday’ then woe betide them if they went over into Sunday! Dancing on a Sunday was against the laws of the church. But then, if you didn’t do it some other musician probably would, and if he turned out to be the Devil then your audience might become a stone circle!

It’s a dangerous game, this singing and dancing.

As is storytelling too!

Footnote: throughout this piece I have talked about musicians as men - I could have used gender-neutral pronouns or he/she but that becomes clumsy and, anyway, in the folk tradition they usually are men.  The women and girls involved are usually the audience—the ones who hear the musician and fall in love with him, or the ones who set out to ensnare him, the ones who encourage him to continue playing into Sunday! 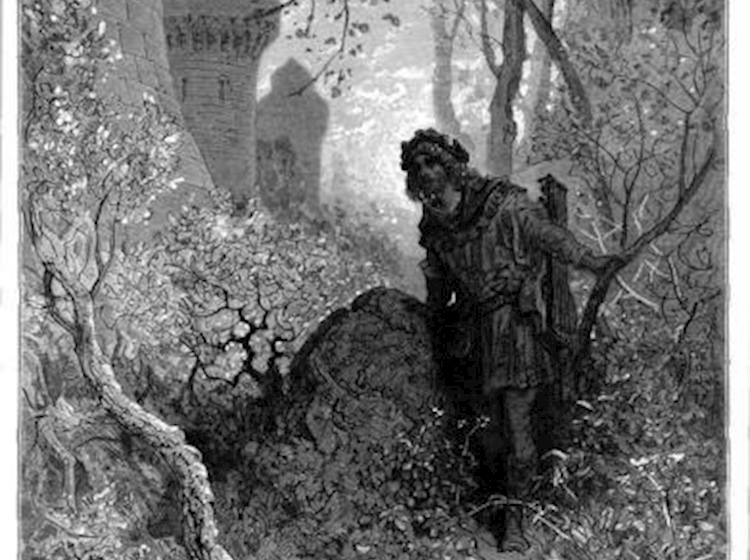