French Resistance and the Nazis’ attempt to tame ‘Little Russia’

When trying to make sense of the vast kaleidoscope of people, purposes and organisations that made up the French Resistance, it is often a good idea to break the country down into smaller parts. This is just what the F section of the Special Operations Executive (SOE), Churchill’s own secret espionage and sabotage organisation, did when trying to organise swathes of competing groups and factions into an effective machine that could support the Allies’ invasion of mainland Europe.

France had in the summer of 1940 been divided into two zones, northern and southern, split by a line of demarcation. South of the line was said to be the ‘free’ zone, governed by the autocratic Vichy government of Marshal Philippe Pétain, in a supposed partnership with Germany. Once the Allies landed in North Africa in 1942, the arrangement failed, and Germany continued to drain French resources. An area mainly within the southern zone known as R5 became more and more problematic for the occupiers. It was rural with few cities and rolling countryside, valleys and forests perfect for guerrilla warfare. It was a central area that had to be crossed if any German units needed to go to Bordeaux on the western coast or north to Paris or Normandy.

Areas such as the Dordogne, the Limousin and the Corrèze had a strong leftist tradition among the working and rural classes. Even as early as 1941 a communist school teacher called Georges Guinguoin formed the first small maquis group east of Limoges. Despite the wish of the central Communist party being for fighting Resistance to form in cities only, it was in the countryside that the significant maquis groups really began to gather pace once the Vichy authorities attempted to force young French men to work in Germany. By mid to late 1943 small armies of men were forming. Some were under the communist banner of the Francs-Tireurs et Partisans (FTP) who were keen to get on with acts of sabotage. Other Gaullist maquis groups formed under the banner of the Armée Sécrete (AS), also in the countryside. Men from the disbanded army were key to helping train the early groups.

When invasion was near the SOE sent men such as Jacques Poirier to help organise the factions and train the enthusiastic locals. As well as arms, know-how and money they also helped provide a focus so that energies were not wasted. Soon the maquis of the countryside, supported and fed by the rural population, were proving capable of disrupting German supply lines and even attacking the rear of German army convoys. Rarely would they take the Nazi machine on head to head. Their policy, and it was successful, was to attack from the rear and disappear without trace. 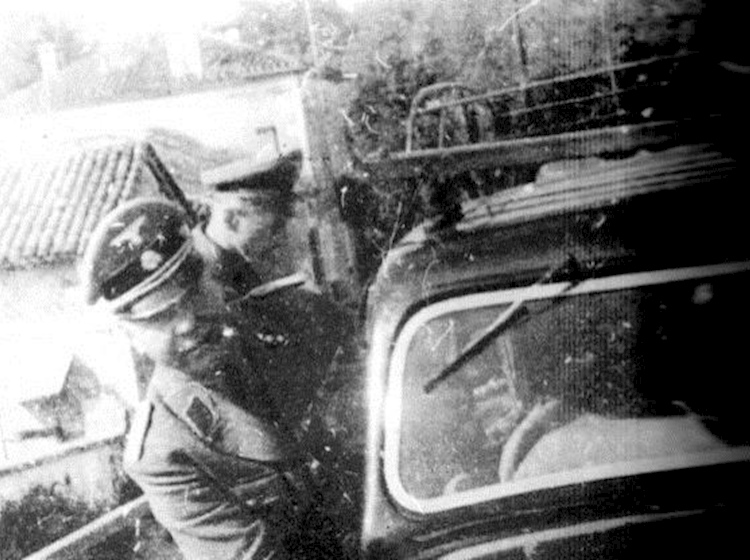 Gestapo chief Michael Hambrecht during an operation in the area, 1944

The German Wehrmacht garrisons in and around towns were struggling to cope, as were the French milice and police services. The area was nicknamed ‘Little Russia’, in a reference to the Eastern Front which the beleaguered Germans had also hated. A policy change was needed by the German high command.

It came in the form of units sent to the region with orders to wipe out the ‘bandits’ by targeting their supply lines - the population. In the Dordogne for example the infamous Brehmer division burned villages and forests, shot hostages by the dozen and deported anyone suspected of sympathy for the maquis. Even the most belligerent FTP leaders ordered their battalions to desist until the ‘clean up’ had passed. After the D-Day landings the famous SS Panzer Division ‘Das Reich’ was ordered to further clean up the area during its passage on its way north to the battle for France. These clean ups were also used to hunt out remaining Jews for deportation or murder.

Deportation of Jews from Russia

Significant tragedies resulted as intended to shock and influence the population into desisting their aid to the maquis or even into denouncing others. At Oradour-sur-Glane 642 men, women and children were killed on a sunny June Saturday afternoon. In nearby Tulle an early FTP attempt to liberate the town resulted in the hanging of 99 local men from the town’s balconies. There were many other such tragedies on a smaller scale but widespread, sustained and shocking. For a period of five months hell visited ‘Little Russia’ and it is testament to the character and courage of the rural population that the German operations failed. The maquis thrived and the actions of the Nazis only served to motivate the people.