Flying for the RAF: Bizarre incidents

When writing Tales of Lancasters and Other Aircraft: Dangerous Skies in World War Two, I recorded some unusual incidents when I was navigating first a Wellington and then a Lancaster. I also learned of the remarkable experiences of scores of other aircrew members: pilots, navigators, bomb-aimers, flight engineers, wireless operators and gunners, most of whom had flown on a complete tour of 30 operations, and sometimes, more.  I include a brief sample of our combined experiences, all abstracted from my book.

A Lancaster bomber during the royal fly past, June 2013. (Carfax2/Wikimedia Commons)

Putting my foot through the floor of a Wellington bomber

The Wellington had a unique ‘geodetic’ construction - a trellis-like duralumin framework, covered by Irish linen, which was then given several coats of dope, a type of varnish.  For anyone walking along the fuselage, there was a reinforced area, virtually a plank of wood, that they had to walk along, as the fabric was not intended to take the weight of a human body.

The Wellington’s master compass had to be kept as far as possible from magnetic influences so it was towards the rear of the aircraft, the pilot using a slave compass.

Before one flight, as navigator, I went, as usual, along the reinforced area, in the blackness of the night, to check the working of the master compass.   I was nearly there when my foot slipped and crashed through the aircraft’s fabric.  It was fortunate that we weren’t in the air at the time!  Anyway, it was sackcloth and ashes for me.

The Parachute that billowed out in a Lancaster in flight

Flight Lieutenant Clifford Storr was the navigator in a Lancaster. After a successful operation they were on the way back when their aircraft was attacked by some Junkers 88’s.  The pilot carried out some urgent evasive manoeuvres but then proposed that everyone should bail out as the situation looked hopeless. Cliff reached for his parachute while the aircraft was in a dive and accidently operated the parachute’s release, so that it billowed out in the aircraft, to his utter dismay.  He would not be able to bail out, whatever happened. But, in fact, no crew member did bail out.

Back over England, their badly-damaged aircraft was in no condition for a safe landing, so the skipper suggested that while he and Cliff would ‘take their chance’ everyone else should bail out this time.  They refused and told him that they would all stay together and ‘take their chance.’ They crash landed and all survived except for the rear gunner, who was killed.

Flying Officer P. Ingleby, the navigator of an Avro Lancaster B Mark III of No. 619 Squadron

The night the heating system failed in our Lancaster

It didn’t take long for the temperature to drop dramatically when the heating system in our Lancaster ceased to function.  Icicles sprouted quickly on my oxygen mask, and a sheet of hard ice formed on my Mercator chart.  My fingers were numb, which made it rather difficult to capture a chosen star in the bubble of my sextant, and carry out the other activities required for accurate astro-navigation, that mode of navigation being essential on long flights.  But my main problem was how to plot courses, wind velocities, etc. on that ice-covered chart.  Finally, a 4H pencil was found hard enough to penetrate the ice, and draw lines on my chart.  We carried on.

One of our aircraft is above and bombing us!

Peter Kenworthy (102and 216 Squadrons) looked up during a bombing raid and watched nine 1000lb bombs come tumbling out of another aircraft.  He said afterwards, ‘They passed between our starboard wing and the tail plane.’

Back home he said to the captain of that aircraft, ‘Your bombs dropped a bit too near to us, Joe.’

Joe said, ‘Yes, I know.  I thought I would have to go round again, but my bomb-aimer said, “ It’s OK skipper.  I can drop the bombs and miss them!”’

An outstanding photograph from the Shuttleworth Military Pageant of Britain’s only surviving flying Lancaster.

Flight Lieutenant George Cash, DFC, rolled off the wing of his Mosquito

George was the navigator of a  2-crew Mosquito, on its way to bomb some marshalling yards just outside Berlin.  When night fighters attacked, several shells smashed into the aircraft.  The main petrol tank exploded and in a matter of seconds, the whole aircraft, built almost entirely of wood, caught fire.  The pilot escaped through the roof exit but was cut by the tail- plane as he fell.  George, surrounded by flames, smoke and choking fumes, found that the, safer, floor exit was blocked by flaming debris and he had no choice but to follow his skipper through the roof exit.   But in a few calm moments, he decided on a plan.  Although, once outside the fuselage, he faced an icy, hurricane-like slipstream, he somehow managed to wriggle on to the wing and then roll two or three times along it so that he could fall clear of the tail-plane, from 28,000 feet and parachute to safety.

Bombing enemy shipping had to be as low-level as possible, to ensure maximum accuracy, but that made it dangerous.  Apart from being close to the ship’s guns, an aircraft might be destroyed when its own bombs exploded on deck.   Eric Stone, DFC (220 Squadron) nevertheless skimmed over the water and carried out a successful bombing operation.  On his return, however, it was discovered that part of the ship’s mast was sticking out of his wing!

A Struggle with a Mae West

Bill Porter (156 Squadron), a Flight Engineer, was, as usual when flying near the sea, wearing his inflatable life jacket, known as a Mae West.  He had to unload bundles of foil to jam German radar. While doing so, the pilot had to take evasive action to avoid German fighter planes, so the aircraft, and Bill, with his silver foil, was constantly shaken about.  Unfortunately the inflating lever on Bill’s Mae West then caught against something and it began to expand and billow out.  The poor chap was struggling for breath under both the Mae West and his parachute harness.  To get as comfortable as possible, he adopted a stooping posture at the risk of fellow crew members thinking that he was taking a nap.

The danger posed by formation flying

It wasn’t easy for Lancasters to fly in formation in all weather conditions.   Geoff King (57 and 97 Squadrons), a bomb aimer/navigator, described how, during formation flying, one Lancaster was caught in the slipstream of another.  He said, ‘It suddenly swept across above us, missing our aircraft by a few feet, then plunged over us again, and straight into the side of another aircraft.  Both immediately started to disintegrate and dived into the fields north of Sleaford.  We were all badly shaken up at seeing so many of our friends killed.  Thirteen died and one survived.’ 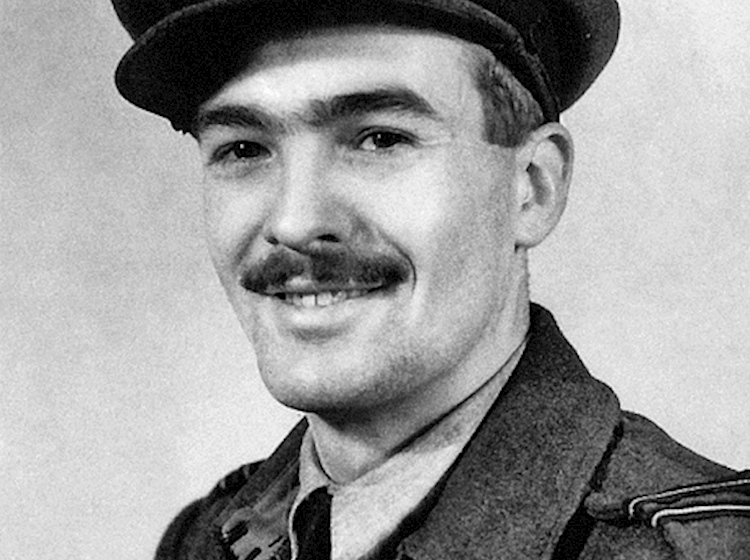 While his aircraft was still gathering speed during take-off, on a mission to bomb a munitions factory, Squadron Leader Gerald de Lucie Carver, DSO, DFC, a pilot with 37 and 78 Squadrons, discovered that his Airspeed Indicator was not registering.  With a heavy bomb load, he needed an accurate measurement of speed to be sure that his aircraft was fast enough to climb.  He therefore tried to abort the take-off, but without success.  The aircraft ran off the end of the runway, crashed through the perimeter fence, and then ploughed into a field of potatoes.

Much leg-pulling followed, and the field was henceforth known as ‘Gerry’s potato patch.’ Gerry’s response was, ‘Well, at least we haven’t had our chips’ (ie we survived).

‘My parachute was a burnt, glutinous mess’

Geoff Cole, (DFC) 103 and 241 Squadrons, was on an operation in a Lancaster and wearing the type of parachute that airmen sat on.   Although his aircraft suffered extensive damage from anti-aircraft fire, it succeeded in getting back to base safely.  The next day Geoff was able to examine the burnt, glutinous mess that had been his parachute.  He said, ‘A piece of shrapnel had passed through the bomb doors, through a can of incendiary bombs, through the floor of the aircraft, and into my parachute.  Being red hot it had melted the artificial silk. Had I not been wearing this type of parachute, I wouldn’t be here to tell the story.’