‘How do you find your stories?’ is the most common question asked of storytellers. The answer is simply, ‘everywhere’:  by opening a book, searching the internet, but most of all from other people.

The oral tradition, the passing on of stories and songs to one another, is essential to this. It’s strong in Scotland due to the kitchen ceilidh culture, where everyone gets together in a house for an evening and each does a ‘turn’, be it song, story, dance, joke, anecdote etc.

Also through the Traveller culture, without which many stories would have been lost forever. Stories would be shared round camp fires, in tents, out in the fields and on the road. As times changed and the cultures changed with it, people such as Jeannie Robertson and Stanley Robertson in the north east, Essie Stewart in the north west and, famously of all, Duncan Williamson, described as ‘the Scottish folk tradition in  one man,’ came to public attention sharing stories and songs of their families, heritage, the land and its people.

Perthshire, in the heart of Scotland, is particularly well served with the Stewarts of Blair, Betsy Whyte and Jess Smith, to name but a few. With its central location and rich berry fields, Perthshire has long been a regular stopping place for Travellers so it’s not surprising there’s a wealth of stories and songs about the place. The Stewarts of Blair (gowrie), Belle and her daughters Cathie and Sheila, were ‘found’ by a scout for the School of Scottish Studies singing songs that had just been for the family and were handed down through generations. They quickly became in demand as singers in the folk tradition but Sheila, in particular, was also a storyteller tour de force and shared her stories far and wide.

Betsy Whyte was also ‘found’ by the School of Scottish Studies, having been told about her by the Stewarts of Blair. She grew up travelling through the summer months but not in the winter and shared stories of people she met along the way. Best known as a singer of the well kent song ‘Yellow on the Broom’ which was written specifically for her, creating a new piece of folk tradition.

Jess Smith is a passionate advocate and campaigner for Traveller traditions and rights. Through her memories of growing up travelling around in a blue bus and her research into the history and culture, sharing tales from her family and others she keeps the stories and tradition alive. Much in demand as a speaker and teller, she takes her tales all over the world giving a glimpse into what life was like.  She has written a substantial catalogue of books starting with her autobiographical ‘Jessie’s Journey’ to the most recent ‘Way of the Wanderers: The story of Travellers in Scotland’.

But stories can be lost or forgotten particularly as life and cultures change and the traditions of sitting round a table or camp fire having a craic and sharing a tune or a tale is decreasing.  Fortunately, there are those who are working hard to capture this oral history before it is lost, such as the School of Scottish Studies, part of Edinburgh University with its extensive sound archive and its younger sibling Tobar an Dualchais (Kist o’ Riches). The school was set up in 1951 and quickly started gathering folktales and songs around Scotland. The founders were Callum Maclean and Perthshire’s Hamish Henderson. Henderson was polymath with a varied career, when he returned to Scotland from Italy and became interested in folk culture and ‘revalidating’ the oral tradition and is considered ‘the godfather of the folk revival’. He, along with other ‘scouts’ from the school, would go out and record stories from people around the country preserving them for prosperity. Henderson is also the founder of what is known today as the Edinburgh Fringe. It started as the People’s Festival, as an alternative to the Edinburgh Festival, it only ran for a few years but the idea carried on.

One of the scouts was journalist Maurice Fleming, a long term editor of the Scots magazine. A Blairgowrie boy like Henderson, he said his job was to ‘follow the camp fire smoke’ and would record the stories as they were shared. It was he who ‘found’ the Stewarts of Blair, albeit in the kitchen rather than by a camp fire. He has compiled several books including ‘The Ghost o’ the Mause’, stories from his home patch of East Perthshire.

Another prominent oral historian and folklorist is Dr Margaret Bennett, originally from Skye, she settled in Perthshire by way of Canada! Award winning, she is widely known for her book ‘Scottish Customs from the Cradle to the Grave’. She has worked with many communities around Perthshire producing wonderful projects  such as ‘Remembered in Perthshire’, ‘In our day:  Stories and songs from Perthshire’, ‘Aye singing and spinning yarns’, a biography of Perthshire singer and mill worker Nell Hannah.

Many of the people involved in oral traditions and oral history are connected to the Traveller culture or are academics or both but there is a surprising one who is perhaps not so well known. Lady Evelyn Stewart Murray, daughter of the 7th Duke of Atholl,  lived in the late 1800s but she was not a woman of her time. Society expected her to wait until some eligible man scooped her up as his wife (think Ladies Mary and Edith from Downton Abbey).

Having learnt Perthshire Gaelic from a young age, Lady Evelyn continued these studies by correspondence with Professor MacKinnon of Edinburgh University. Between February & December in 1891 she embarked on an ambitious project to capture the stories and songs of the area by visiting the staff and tenants of her father’s extensive Perthshire estate. She spent long hours travelling and recording stories verbatim and painstakingly by hand in her diaries. She planned to return to this, but due to combination of her mother’s will and poor health, she never did. It was always intended her diaries would be published and several attempts were made but were not successful. It took the meeting of Perthshire Gaelic specialist Tony Dilworth and Lady Evelyn’s biographer, Perthshire resident Sylvia Robertson, for the diaries to be finally published in 2009 under the title ‘Tales from Highland Perthshire’. It is a treasure trove of stories, poems and anecdotes capturing many that would have otherwise been lost.

So what is it that makes Perthshire such a fertile place for the oral tradition and folk tales? Perhaps it’s something in the water...

By Lindsey Gibb and C.A. Hope 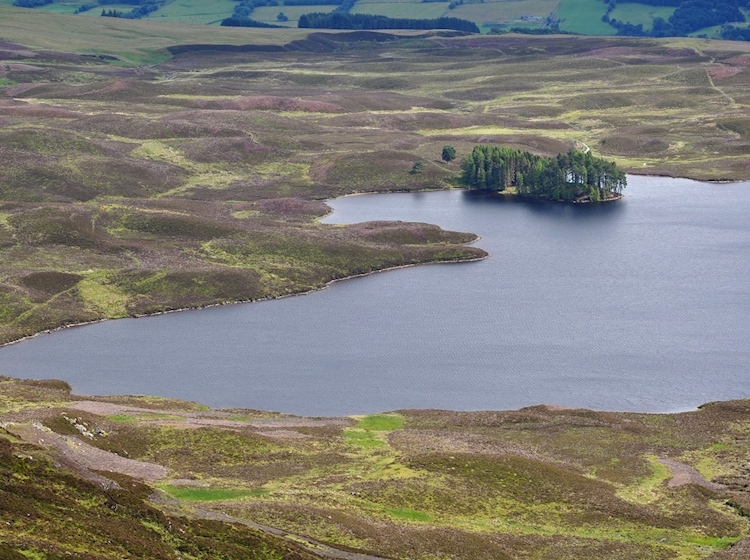