Fact into fiction: The art of Nazi propaganda

On the morning of 10 May 1940 Germany invaded Belgium, Luxembourg and the Netherlands.
Scarcely 24 hours later, the headlines in the German press were to condemn a terror raid by Allied planes during the afternoon of 10 May on the civilian population of the undefended German city of Freiburg in south-west Germany. 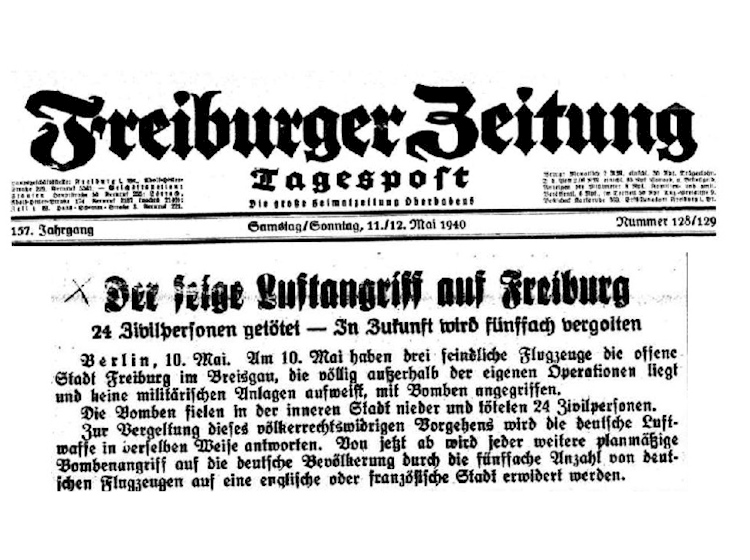 This would be followed by even more heart-rending reports about the funeral service held four days later for the victims of the bombing – by which time the total civilian deaths had risen to 57 including 20 children. In subsequent weeks harrowing film footage of the funerals and destruction would be screened throughout Germany and distributed to the news agencies of friendly and neutral countries world-wide. There was unanimous condemnation of such a barbarous act which was in clear contravention of an earlier League of Nations resolution that the deliberate bombing of civilian areas was illegal.

But, the claim that the Allies had bombed Freiburg was complete fiction.

Indeed, the whole incident was turned into one of the greatest propaganda mistruths of the whole of the Second World War – a lie which was even used to justify the subsequent bombing by the Germans of civilian targets in France and Britain.

So, what was the truth?

Did such a bombing raid take place? Yes!

Was it carried out by Allied planes? No!

The sad fact is that three German planes, having lost their way during a mission to destroy a target in France, dropped a total of 69 bombs on Freiburg by mistake – believing that they were still over France. Indeed, German aircraft observers had spotted the German planes heading towards Freiburg but had not initially sounded the air-raid sirens since these were friendly planes. The sirens were only sounded once the bombs had been dropped.

It was all a tragic mistake and one might have been prepared to excuse the initial press and radio reports for genuinely believing that it had been an Allied bombing mission. However, while the truth was soon revealed to the German High Command, no retraction was ever issued. Indeed, local and national newspapers and newsreel reports were still perpetuating the same myth several weeks later.

To make matters worse, in a clear example of Nazi propaganda, Goebbels deliberately exploited the tragedy to cast the Allies in a bad light and promised that, thereafter, every planned bombing raid on the German people would be answered by a five-fold number of German planes attacking British and French cities.

Hitler was to go as far as to repeat the lie in a speech in December 1940, when he accused the Allies of having started the bombing war against civilians with the attack on the undefended city of Freiburg.

It was one clear yet tragic example of how fact was often turned into fiction by both sides during the war – purely for propaganda purposes.

Joseph Goebbels, Reich Minister of Propaganda in Nazi Germany from 1933 to 1945
A memorial stone erected in Hilda Playground, Freiburg commemorates the deaths of 20 children killed in the raid. The inscription acknowledges that German planes caused the deaths (Dr. med. Mabuse)

This raid and examples of how both sides manipulated the truth about other key incidents in the Second World War are explored in Battling with the Truth, due for publication in July 2016.