Exercise Tiger was the code name for one in a series of large-scale rehearsals for the D-Day invasion of Normandy, which took place in April 1944 on Slapton Sands in Devon.

Slapton’s unspoiled beach of gravel, fronting a shallow freshwater ley and backed by grassy lands seemed perfect to the American forces to simulate practice landings for the launch of Operation Overlord on 6th June 1944, the D-Day landings in Utah Beach, France.

‘Exercise Tiger’ under the command of Admiral Don P Moon of the United States Navy was one of several assault rehearsals conducted at Slapton Sands on the Devon coast. So vital was the exercise that the commanders had ordered the use of live naval and artillery ammunition to make the exercise as real as possible to accustom the soldiers to what they were soon going to experience.

The exercise was conducted between 22nd and 30th April 1944 and commenced with the marshalling and embarking of the troops to the LSTs (Landing Ship Tanks – a flat bottomed four and a half thousand tons assault ship capable of carrying several hundred men, lorries and tanks) off the coast of south west England. The first assault landings were made on the morning of the 27th April, following the ‘bombardment’ and was continued throughout the day. A follow up convoy of eight LSTs was expected later that night and it was this convoy which met with tragedy.

An LST on the beach at Slapton

The Commander in Chief in Plymouth was responsible for the safety of the rehearsal. Since German E-Boats, fast moving boats armed with torpedoes and with a top speed of up to 40 knots, patrolled the English Channel at night the Commander had placed extra patrols across the mouth of Lyme Bay, consisting of two destroyers, three motor torpedo boats (MTB) and two motor gunboats from the Royal Navy. Another MTB patrol was sent to watch Cherbourg, where the German E-Boats were based.

On the night of 27th of April, a few minutes after 10:00 p.m. a group of nine German E-Boats set out on a normal reconnaissance mission from their base in Cherbourg into the Lyme Bay area. They followed the usual channel route without any sign of a convoy or ‘enemy’ ships. As they headed towards the Lyme Bay area, they suddenly came in visual contact with the LST convoy. Since they could not see any naval escorts, they quickly positioned themselves for a torpedo attack.

As the convoy approached Lyme Bay it was manoeuvring a loop to head back towards the shore. It was here that the E-Boats made contact and opened fire. A few minutes past 02:00 a.m. LST 507 was torpedoed, hitting its auxiliary engine room and cutting all electric power. The ship burst into flames, the fire fighting attempted by the crew proving futile as most of the fire fighting equipment was inoperative due to the power failure. After about 45 minutes or so the survivors of the attack were ordered to abandon ship.

“A first class petty officer on LST 507, Angelo Crapanzano feeling feverish had fallen fast asleep in his bunk. The blasting of action station horns woke him up. Moments later there was a deafening roar and everything went black. Least did Crapanzano know at that moment the ‘deafening roar’ was a torpedo discharged from a German E-Boat. The Ship was burning furiously from the bow almost right down to the stern. He had no option but to jump in the icy cold sea.” 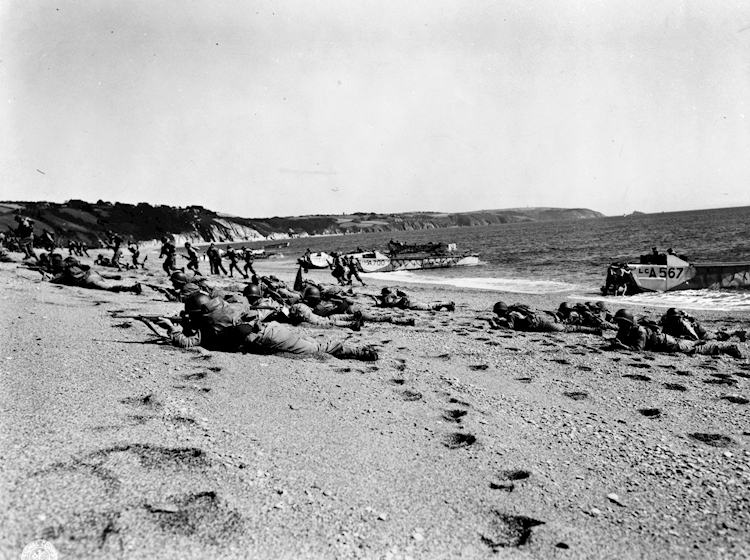 LST 531 was hit by two torpedoes shortly after LST 507 was hit. The ship burst into flames, rolled over and sank in six minutes. Several minutes later LST 289 was torpedoed. However LST 289 managed to limp back to shore but only after suffering a number of deaths and casualties amongst the men aboard.

Trapped below decks hundreds of soldiers and sailors went down with the ships. There was little time to launch lifeboats and some of the lifeboats were jammed. Many leapt into the sea but soon drowned, some weighed down by the waterlogged coats and others who had wrongly put their lifebelts around their waists rather than under their armpits. Others succumbed to hypothermia in the cold water. In all, 749 American soldiers and sailors died that night – 946 in total during Exercise Tiger.

Subsequent investigations revealed two main reasons for the tragedy: firstly, a lack of naval escort vessels and, secondly, an error in radio frequencies. The convoy was supposed to be accompanied by a Royal Navy Corvette and a World War I destroyer. The destroyer, having suffered damages, was in port for repair and a replacement was not available. The carefully prepared radio frequencies were issued with serious typographical errors which resulted in the LSTs being on different radio frequencies to the Corvette and the commanding officers onshore.

When the news reached the Allied commanders it greatly worried them that so many lives were lost, particularly the missing officers who, if in German hands, had plans that would reveal the Allied intentions for the D-Day landings. This was so serious the Allied commanders even considered changing details of Operation Overlord presuming that the enemy would discover the details.

Miraculously, the bodies of every one of those officers with highest-level clearance were found. The tactics of D-Day were secure. Meanwhile the tragedy was kept a top secret. The survivors were strictly ordered not to talk about it. 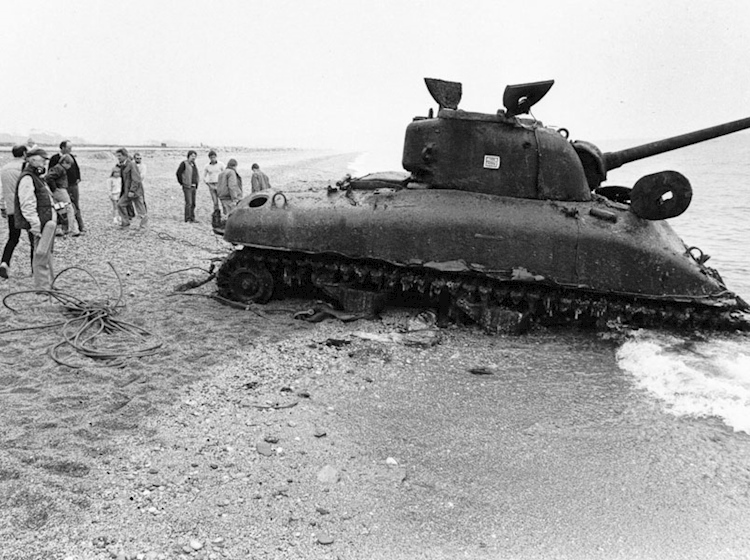 The tank being pulled from the sea 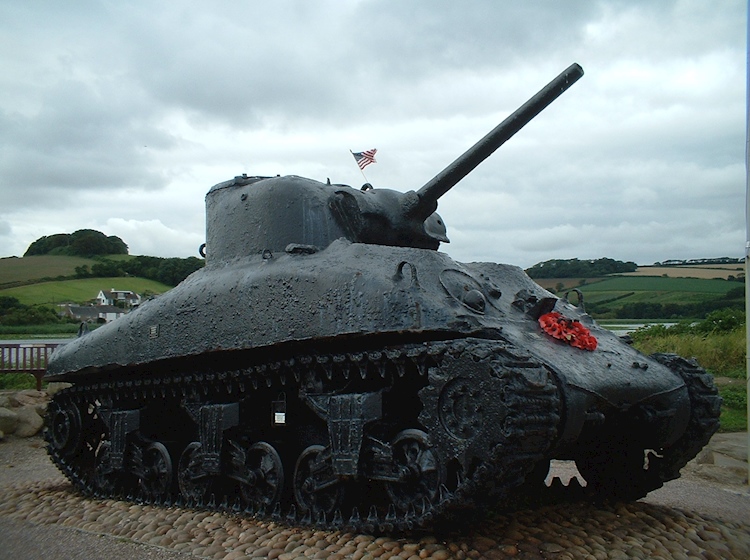 The tank now serves as a memorial to the lives lost

After the Normandy invasion the incident was not revealed until 40 years later. Through the efforts of an Englishman, Ken Small, the US and British Armies acknowledged the tragedy and the incident was unfolded to the world.

Ken spent several years beachcombing the area and found old gold coins, diamond rings and even gold bracelets. To his amazement he also found a large amount of militaria like shrapnel and shell cases, live and used bullets of all calibres, military buttons and pieces of military vehicles and equipment. Sometime later he was told by a friend – a local fisherman – of an ‘object’ some three quarters of a mile out to sea embedded in 60 feet of water. He ventured out to sea in his boat with his friend and a few divers to find out more. When the divers surfaced having inspected the ‘object’ they said that there was an American Sherman tank intact on the seabed. On 25th November 1974 Ken became the proud owner of the Sherman tank following lengthy negotiations in England, Germany and America.

The tank was finally winched ashore to the location where it stands today, on the road behind the beach at nearby Torcross. On 9 November 1984 a service was held at Slapton Village Church to dedicate the tank. After the service, wreaths were laid at the site of the tank as a bugler played ‘The Last Post’ and a plaque was then unveiled which reads: