Excavations on the Cotswold Way

There have been a number of excavations at Great Witcombe Villa, beginning in 1818 after its discovery by workmen removing an ash tree. Each of those excavations has left a legacy of poor preservation of the walls and foundations and unsympathetic reconstruction; therefore little of the present display represents the original positions of many aspects of the building.

Phase One of the villa was a late Iron Age settlement close by, and there is the possibility that a rectangular suite of seven rooms by the stream, some with plastered walls and floors, might have been a very early villa. Elsie Clifford, in her excavations of the north-west wing, which contains the lower baths, suggested a date before the end of the first century for its construction. Since then it has been proposed that the mosaics in this phase should not be dated later than AD 200.

The plan and layout of the later building was ambitious, unified and planned to impress, especially in its use of the hillside slope: it could be seen from Ermin Street as it descended the Cotswold scarp. A gallery formed the ‘cross-bar’ that linked the east and west wings of the ‘H’-shape that framed it, giving a satisfying perspective both from and to the villa. It had a mosaic pavement flooring it and halfway along was an apsidal space later converted into an octagonal structure that may have served as a dining room. Reconstructions of the villa suggest that the gallery and both wings could have had an upper storey due to the angle of the hill side slope. However, the presence of the springs necessitated the buttressing of the gallery and the west wall of the east wing and perhaps argues against a higher structure with more weight.

The final phase, in the late third or fourth century, saw the structure become a courtyard-type villa with the addition of a southern boundary wall. It would seem that the additions and modifications to the villa structure were piecemeal, with two major episodes in the incorporation of the ‘lower’ baths into the south-west wing and its decoration with painted plaster and mosaics with geometrical and aquatic designs. Extensions to the south-east wings added the kitchen and stores, with possible accommodation for farm labourers. Presumably residential accommodation was on an upper floor. Additions and modifications to the house continued in the fourth century, but the basic footprint of the original design did not change.

In 2000 the Cotswold Archaeological Trust undertook a programme of field surveying, the results of which identified platforms indicating that there were further substantial ranges flanking an outer courtyard that may have incorporated a formal landscape garden and which would have further emphasised the gallery as the centre of the perspective. The villa seems to have continued into the fifth century, but in a much-dilapidated state. The subsequent hill side slumping must have been slow but dramatic, damaging the side ranges but leaving the central gallery largely intact and burying the lower parts of the site enough to protect the stratigraphy and artefacts of the south-west lower baths.

The survey work of the Cotswold Archaeological Trust in 2000 identified a number of potential structures around the house, including a possible mill. The discovery in the stream of tile wasters, indicating their manufacture, was also supported by the discovery of areas of strong magnetic response from possible kilns and hearths south and north-east of the villa, far enough away and downwind so as not to cause problems for the inhabitants. Evidence for the working of copper alloy and lead had been also been recorded previously, as well as the possibility of pewter vessels being manufactured at the villa. Clearly, a site in such a magnificent position for flaunting wealth and status, and planned with so much care and effort to ensure the effectiveness of such spectacle, indicates an important individual of power and wealth. The rich late Iron Age burials at Barrow Wake might suggest the presence of a dynastic group, perhaps represented later by the possible mausoleum platform found during the 2000 fieldwork, which might indicate continuity from the late Iron Age into the Roman period.

The site is managed by English Heritage and is open for viewing at any reasonable time, although the mosaics are in a shed which is inaccessible. 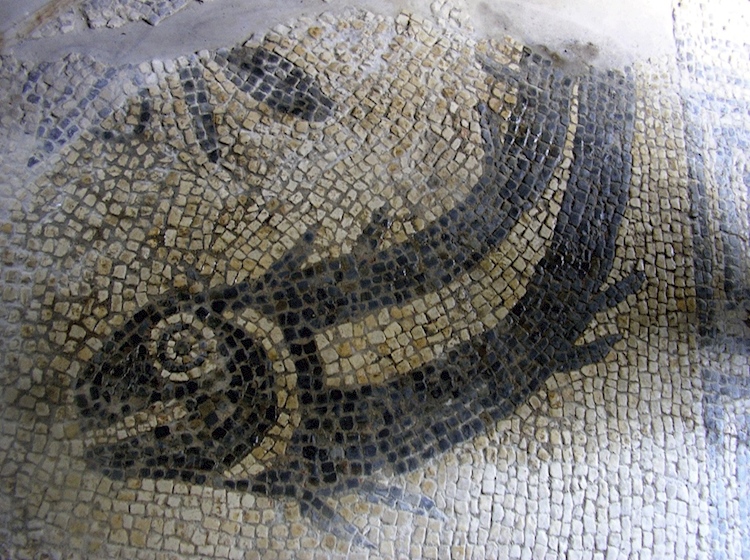 Detail of the mosaic floor in the bath house 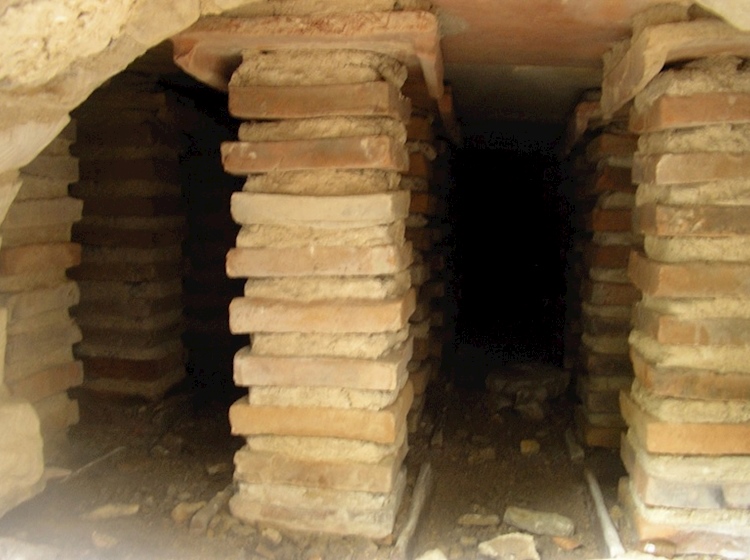 Hypocaust floor under the changing room of the bath house