Eight things you might not know about the black cab

The London black taxi cab is known all around the world and a ride in one is a ‘must’ for visitors to the capital. It is known for its safety and reliability and its drivers are renowned for finding their way through London’s maze-like back streets and thoroughfares. The origins of London’s regulated taxi trade go back 900 years.

Here are some things you may not have known about the iconic black cab:

London taxis may not always be black. Since 1982, advertising has been appearing on the sides of cabs and  even all over as complete paintwork.

In Saxon times the River Thames was the main highway through London. If you needed to get to somewhere on the opposite bank or further up or down the river you needed to hire a waterman and his boat. The watermen received a Royal Charter in the twelfth century to be able to ply for hire and had plenty of work taking wealthy merchants over the river to the gaming-houses and brothels of Bankside.

As London expanded and more bridges were built across the Thames, the use of horse-drawn Hackney carriages superseded the water taxis. The innovation of a cab rank along the Strand made the carriages easier to find and became a focal point for drivers looking for fares. Meanwhile man-powered sedan chairs were the choice for shorter journeys.

The popular horse-drawn ‘Cabriolet’ was designed in 1823 by Mr David Davies and is where the term ‘cab’ originated. Joseph Hansom’s Patent Safety Cab design of 1834 was improved by Henry Forder in 1873 to produce a well-balanced vehicle capable of 17mph. David Davies also introduced the enclosed, four-wheeled Clarence in 1836. It was known as a ‘growler’ because of the noise its wheels made on London’s cobbled streets. 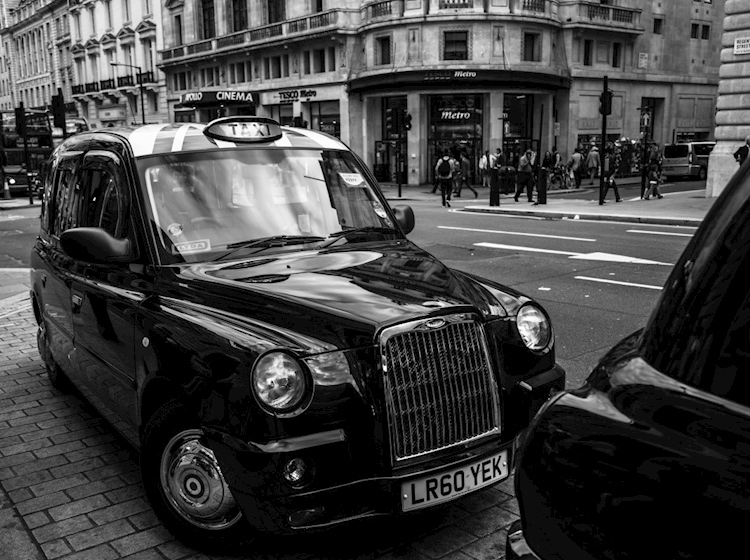 The first mechanically-propelled taxicabs to be licensed in London (in 1897) were electric vehicles. The Bersey all-electric black and yellow ‘Hummingbird’ cabs had an array of forty 80-volt batteries strapped under the carriage. This gave them a distance of 30 to 40 miles but they only reached a maximum speed of 9 miles per hour. Internal combustion engine-powered vehicles soon followed and gradually, the horse-drawn cab disappeared.

The drivers of London black cabs all have to have ‘the knowledge’ which can take years to acquire. Having ‘the knowledge’ means knowing, like the back of your hand, the best route from A to B in precise detail. In fact, there are over 400 routes which criss-cross London and all have to be learned. It also means knowing the exact locations of key places such as stations, theatres, hospitals and so on. Some might say that this knowledge has been superseded by satellite navigation but as we all know, we can sometimes be led up the garden path by our satnav.

Back in the 1960s Labour Prime Minister Harold Wilson wanted to nationalise the taxi trade. He intended giving the drivers a liveried uniform and a salary!

Before the arrival of the Uber in 2012, all of the 24,000-plus purpose-built London cabs were tough, sturdy, safe and had to comply with the stringent ‘Conditions of Fitness’ laid down by the trade’s regulatory body, the Public Carriage Office (PCO). In September 2017, Transport for London and the London Mayor Sadiq Khan announced that Uber’s operating licence in London would not be renewed due to ‘public safety and security implications’. Uber continues to operate while it appeals this decision. Around 3.5 million passengers and 40,000 drivers use the Uber app in London.

Traditional black cab drivers have fought hard to resist the newcomer but have been forced to accept changes to their way of operating. The public have long demanded cash-free payment methods and, largely thanks to Uber, they are now accepted as standard.