Edgar Wallace at the movies

Edgar Wallace. Prolific best-selling author. Soldier poet. Dramatist, responsible for West End hits. Racing tipster. Journalist who wrote thousands of articles and who scooped the signing of the peace treaty which ended the second Boer War. Parliamentary candidate. As if that wasn’t enough for one rather short lifetime- Wallace also worked in the movies too after becoming enticed in the late 1920s by the exciting new world of the motion picture industry.

Silent film versions of several of Wallace’s books had already been made by the time the newly formed British Lion Film Corporation invited Wallace on to its board as Chairman in 1927. Wallace granted the company the exclusive rights to everything he wrote. It was a contractual arrangement which suited British Lion more than it did Wallace- but it enabled him to play the part of a movie mogul which he greatly enjoyed. From 1928-9 British Lion made nine silent films from Wallace’s books, starting with his classic work, The Ringer. But not all of these films were well received critically. Wallace decided to start directing the films himself. He was confident, as he was in everything he did, that he’d be a great success. He was certainly prepared to make considerable sacrifices on the set. ‘For hours he went without a cigarette, the only time in his life, so far as I know that he spent more than a few minutes without a lighted cigarette in his holder. He believed that smoke interfered with the photography’, noted Jim, his wife. Instead of chain-smoking, Wallace sucked toffees as he directed Red Aces.

He proved to be benign director, not given to shouting and screaming at the actors. Making his film debut in Red Aces was Nigel Bruce, the actor most remembered today as Dr Watson to Basil Rathbone’s Sherlock Holmes. Red Aces was a silent film, but the talkies were soon to take over and Wallace's name features prominently in the early history of talking pictures.

After the British Lion studios were refitted for sound, Wallace directed an all-talking version of The Squeaker, starring Nigel Bruce and Gordon Harker. He wasn’t just active behind the camera, but in front of it too, as he also appeared, in a small role, in a film of The Crimson Circle, one of his most popular thrillers.

As if his directing – and acting – was not enough, he also started to write regular articles on films for Sunday News. Wallace was bitten by the movie bug – and it would only be one year later that he was to say yes to the lucrative offer of working as a script-writer in Hollywood.

It was in Hollywood that he wrote his scenario for Kong the film that became known as King Kong. Sadly, Wallace never lived to see his greatest film success, but his important place in the history of the motion picture industry is guaranteed. By 1973, over 200 films had been made from his books and plays, making him one of the most filmed authors of all time.

Some of the best film versions of Wallace’s work were made in West Germany, by Rialto films in the 1960s. These films were incredibly popular: in 1986 a television showing in West Germany of The Green Archer, was watched by 17.07 million people. There have been good British film versions too, and I particularly recommend the 1940 version of The Case of the Frightened Lady starring Helen Haye and Marius Goring, and the 1937 version of The Squeaker, featuring the marvellous Alistair Sim. Apart from remakes of King Kong, film-makers have tended to neglect Wallace′s work in recent years, but with such a wealth of great material to chose from, let’s hope that he’ll soon be rediscovered. 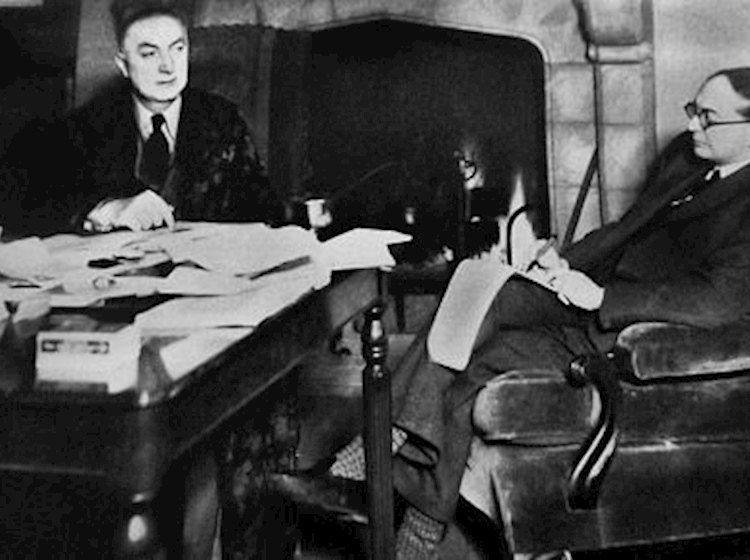 Edgar (left) working in Hollywood with Robert Curtis shortly before his death
A plaque in Fleet Street, London, commemorating Edgar Wallace who worked at the Daily Mail before finding fame as an author
Theatrical release poster for King Kong