Down amongst Titanic’s ‘Black Gang’

Much has been written and documented about the Titanic disaster, but here we seek to concentrate on the actual world and workplace of the Titanic’s ‘Black Gang’. In doing so there will be an opportunity to take a journey and have a detailed look at some of the major elements of machinery that one might also have encountered in the engine and boiler rooms of the RMS Titanic and her sister ships, the Olympic and Britannic.

As strange as it may seem no known photographs of the engine and boiler rooms, with machinery in place, of the Olympic, Titanic and Britannic (Yard Nos 400, 401 and 433) exist. None even of firemen/stokers at work in their boiler rooms and stokeholds. This seems somewhat ironical when one considers that the Olympic was not converted to oil-burning until 1919-20!

In an attempt to help compensate for this, any images in Down Amongst the Black Gang are from coal-burning vessels contemporaneous with the ‘Olympic’-class ships, such as French Line’s France of 1912 and Cunard’s Aquitania of 1914. The United States Naval Historical Centre have preserved boiler room images of the US Navy’s troopships George Washington, Leviathan, Mount Vernon and Troy. All were built during the Edwardian era and just before the First World War. Three were commandeered German liners, the George Washington completed in 1908 was formerly owned by North German Lloyd, and the Mount Vernon had been the same company’s Kronprinzessen Cecilie completed in 1906. The Leviathan had been Hamburg America Line’s Vaterland, completed in 1914. They were more than likely manned by US Navy conscripts (US: ‘draftees’).

Other scenes are from merchant vessels of the coal-burning era, and with one exception show the stokeholds with fire tube, cylindrical or ‘Scotch’ boilers. Most of these engine room photographs may have been posed for the time exposure of film used in its day. Hopefully they may help show the harsh conditions of extreme heat, dimly lit, dirty, and back-breaking environment in which the ‘Black Gang’ toiled. Indeed some are even somewhat ‘Gothic’ in appearance. Originally the ‘Black Gang’, also known as the ‘Black Feet Brigade’, were the firemen/stokers and trimmers who worked in the stokeholds and boiler rooms of coal-burning steamships like the Titanic. Their name derived from their black appearance due to the coating of coal dust on their faces, exposed skin and clothing, and the hot, coal-dust laden atmosphere in which they laboured. Along with coal miners, foundry workers and chimney sweeps, it was a dirty, filthy, grimy job, but unlike these two trades, firemen and trimmers also had to endure the searing heat from open furnaces. In time this would apply to anyone who worked down below among the ‘Black Gang’, like greasers, and also the engineers could be labelled by the same familiar (or perhaps derogatory) sobriquet.

The title of Fireman or Stoker is interchangeable, as in time the actual distinction has become blurred, but essentially their work was the same. It is believed that the title stoker was a Royal Navy rating, while fireman applied to the same post in the Merchant Navy. It has been written in Commander (E) A. Funge Smith’s book Introduction to Marine Engineering that ‘there are no stokers in the Merchant Navy, the nearest approach to them being the firemen who attend to the fires of the boiler furnaces ...’

The Titanic had twenty-four double-ended boilers and five single-ended boilers. When all the double-enders were fully fired up and operational, they could consume approximately 850 tons of coal per day, or on average 35 tons per hour, and the Titanic had a total bunker capacity of 6,611 tons. It was the ‘Black Gang’s’ job to keep these boilers fed, which meant shovelling a ton of coal into the boiler furnaces every two minutes. Every boiler room was manned by ten firemen and four trimmers. Rarely seen or encountered by the passengers, the ‘Black Gang’ provided the manpower behind the horsepower.

The stokehold and boiler rooms as terms were also interchangeable, but on the Titanic the boiler rooms were separated by watertight bulkheads, and the stokeholds were the transverse ‘alleys’ from the amidships line of the hull where the boiler fronts were worked.

In the book, where possible, descriptions of the Titanic’s boilers and main engines are from the ship’s actual technical specifications. When these have not been available, technical details from Marine Engineering and Naval Architecture literature contemporaneous with the era of the Titanic (q.v.) are used. As the Titanic was the second of a class of three ships, her earlier sister the Olympic has been referred to, as has the last of the trio, the Britannic. Also illustrations and descriptions of her sister ships have been used.

Extracted from Down Amongst the Black Gang by Richard P. de Kerbrech

A feat of engineering 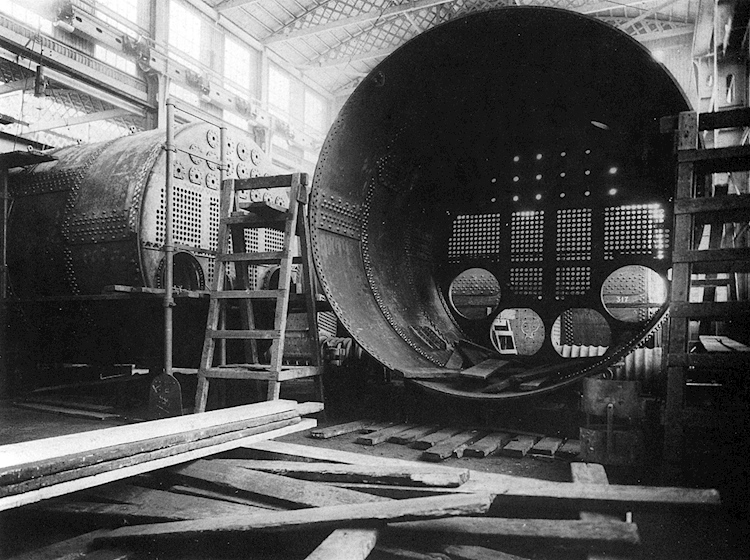 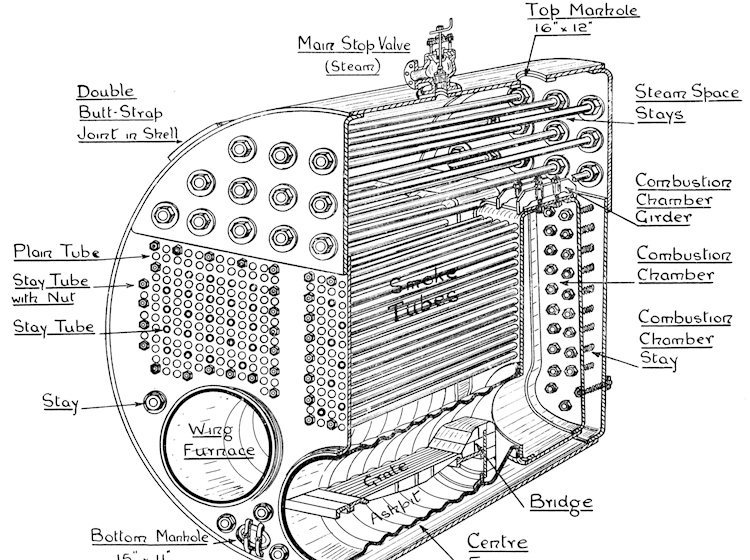