No, they told me again and again, there was nothing special about them. They were just ‘doing their bit’ for their country. Modest to a fault, these women faced danger, sudden death, serious injury or bereavement on an almost daily basis. Yet there was nothing, they insisted, remotely heroic about their exploits.

When I was asked to write The Female Few: Spitfire Heroines I interviewed five Air Transport Auxiliary (ATA) female pilots – the women who flew Spitfires and many other types of planes from factories to RAF squadrons during World War II. Here was an assignment like no other: meeting them, recording their histories, reliving, through their words, those turbulent, war-torn years when Britain’s skies rained destruction and the country’s future hung perilously in the balance.

When war broke out in 1939, the aviation industry was in its infancy; only the well-to-do could even afford the luxury of travelling by plane. Amy Johnson’s solo flight from Croydon to Australia had taken the world by storm, making flying a fashionable pursuit for wealthy women. As war with Germany loomed, the RAF would desperately need increasing numbers of planes and pilots. But female flyers? No thanks.

But war has the ability to be a great social leveler, and thanks to the efforts of the redoubtable Pauline Gower – an experienced commercial pilot and MP’s daughter – female pilots were about to take their place in the history of the Second World War and in Britain’s eventual victory. The ATA, a civilian organisation whose pilots were principally tasked with ferrying new fighting machines from the factory to the RAF airfields, was being born just as war spread across Continental Europe.

Aviator Amy Johnson waves to the crowd after landing at Brisbane, 1930
Pauline Gower at the Women's Engineering Society Awards Dinner, 1940
Pauline Gower waving from the cockpit of a de Havilland Tiger Moth at Hatfield, Hertfordshire, prior to a delivery flight, 1940

In January 1940, eight female pilots ferried open-cockpit training planes (De Havilland Tiger Moths) in harsh wintry conditions from a muddy base at Hatfield, near the De Havilland factory, up to Scotland. It was a modest start, but within a few years this group of female flyers would be at the controls of fighter planes and four-engine bombers. In time their numbers would swell to 168 out of a total of 1,245 ATA ferry pilots and engineers. In a sense, it was a backroom job, flying across the country, getting the planes to where they desperately needed to be. But without the combined efforts of the ATA’s 4,000 employees, the outcome of the war could have been very different.

During the war the ATA earned itself the nickname Foreign Legion of the Air, with pilots coming from 28 different countries. Twenty-five enthusiastic and experienced female flyers from the USA joined the ATA in 1942. Four women from New Zealand determinedly paid their own passage in order to be part of history. One woman, 19-year-old Margot ‘Chilli’ Duhalde, spoke no English at all on arrival, yet went forth with the same sense of courageous daring. These women embodied the ATA motto, ‘eager for the air’.

Sometimes pilots would fly six different types of plane in just one day’s endeavour, ferrying Spitfires, Hurricanes, Barracudas, Harvards, Wellingtons, Tempests and Lancaster bombers in the ever-changing British weather without radios or navigation aids. Because they were required to stay within sight of the ground, they were not taught the art of flying with instruments. They flew ‘blind’ with just maps, a compass and a watch, though some would eventually make it their business to teach themselves instrument flying by scrounging sessions in an early flight simulator called a Link Trainer. It wasn’t until after D-Day in June 1944 that pilots were taught how to use radios.

During WWII, over 20,000 Spitfires were produced in the Southampton and Castle Bromwich factories, so the women flyers were based at two separate ferry ‘pools’ close to the Spitfire factories – one in Hamble, Southampton and the other near Cosford. The women worked 13 successive days on, followed by two days off. Each day’s routine – flying to and from factories, front line squadrons and maintenance units – would begin at the ferry pools with the handing out of delivery chits.

‘You didn’t know what type of plane you were going to fly that day,’ ex-ATA girl Joy Lofthouse told me. ‘You’d get out of a Tiger Moth after delivery and then into a Wellington bomber. After that, you could be flying a Spitfire.’

Joy’s story, and that of her sister Yvonne, was unusual in that both were recruited by the ATA in an ‘ab initio’ scheme launched in the summer of 1943 by an advertisement in Aeroplane magazine. The urgency for more pilots meant the ATA were willing to train people without any flying experience at all. Out of 2,000 applicants, just 17 were accepted for the rigorous training programme. Incredibly, neither of the ‘Gough Girls’, their nickname at the time, had ever been inside an airplane before.

Having just lost her young husband Tom, an RAF pilot, in a bombing raid over Berlin, many would think that Yvonne would be daunted by the prospect of joining the ATA. ‘It wasn’t a death wish; I saw it as one of the most worthwhile jobs I could possibly have,’ she said when asked. ‘Once I knew they would accept women without experience, it seemed natural to me to do my part for the war by flying.’

You need a cool head to be a safe, capable pilot. You also need excellent co-ordination skills. Joy believed the athletic background she and Yvonne had had gave them a real advantage when it came to being accepted as trainee pilots without experience.

All of the women I interviewed had overcome setbacks or hurdles. Mary (Wilkins) Ellis, who has recently celebrated her 100th birthday, was a sickly infant yet went on to be known as the ‘Fog Flyer’ because of her incredible skills at operating in bad weather. Margaret Frost was rejected by the ATA initially because she didn’t quite fit their criteria. She persisted and eventually found herself in the cockpit, flying Spitfires.

Molly Rose came from an aviation background and flew 36 different types of aircraft for the ATA, but her equilibrium was sorely tested in the summer of 1944 when she received a telegram saying her husband Bernard, a tank commander, was missing, presumed dead. Molly continued to fly. ‘Sitting around, waiting for news, was no tonic for anyone,’ she said. In fact, she later learned that Bernard had survived. He had been captured and remained in a POW camp until the couple was reunited at war’s end.

Joy Lofthouse at Hamble, 1944, getting ready for a day’s work delivering Spitfires from factories to airfields
Summer of 1942; Yvonne Wheatley (later MacDonald) in her late husband Tom Wheatley’s Renault
Known as the ‘Fog Flyer’, 1st Officer Mary (Wilkins) Ellis
‘It felt like the best day of my life’ - Mary (Wilkins) Ellis flew a Spitfire over Suffolk at the age of 90 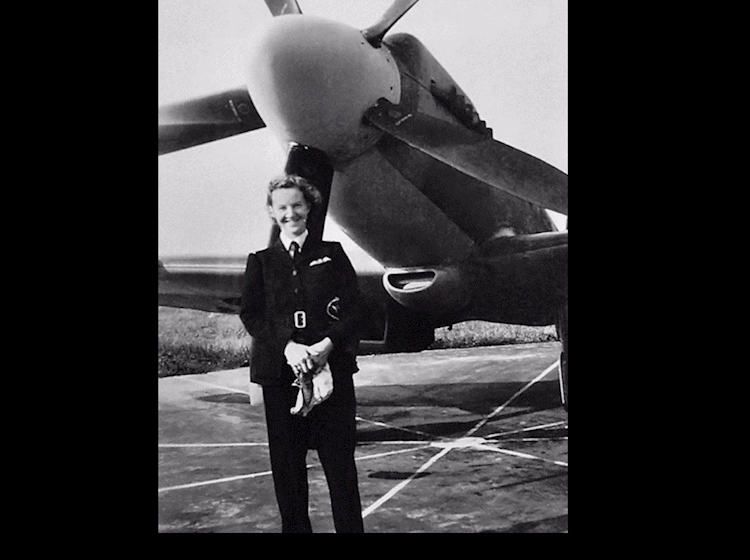 This is just a snapshot of a handful of women out of the millions in Britain who were ‘doing their bit’ throughout those turbulent years, working on the Home Front in all sorts of far less visible or glamorous jobs, deploying camaraderie and stoicism in ways unimaginable to us now.

As all the Spitfire Girls I interviewed have insisted, they were simply the tiny cogs in the giant wheel of Britain’s war effort. But it is hard to reflect on the daring contribution made by all those women at the controls of fighter planes, battling their way through the stormiest of skies, without experiencing a tinge of awe and wonder – without thinking of them as heroines.

Learn more about women in history