Arts and Crafts design and craftsmanship flourished in the Cotswolds between 1890 and 1930. This achievement is now widely acknowledged and there is plenty of opportunity to appreciate its impact throughout the region. Chipping Campden and Broadway are ideal starting points, where Court Barn Museum and the Gordon Russell Design Museum will whet the appetite and serve as your guide. The outstanding Arts and Crafts collection at The Wilson Gallery in Cheltenham should not be missed and, further south, the memorable manor houses at Kelmscott, Rodmarton and Owlpen all deserve a long and leisurely visit.

Beyond these main centres, the work of the Arts and Crafts architects awaits discovery in most towns and villages although it may not always be easy to find.  Rooted in tradition and respectful of context, these buildings were designed to melt into their surroundings. From country houses to public baths and garden walling, the craftsmanship expressed a joy in the particular qualities of each material and in the natural beauty of the Cotswold countryside. Sentimental and idealistic as this may seem, these designers were driven by a social and moral conscience that railed against the impact of industrialisation on rural life. They sought to revive the local building crafts not to mimic some lost idyll but to reinvent them so that they might survive. Their designs had to be practical and affordable to address the whims of wealthy escapists and their demands for modern comforts as well as the pressing issues of rural poverty and depopulation.

Domestic architecture made up the bulk of their commissions. As many of these, especially the larger houses, remain in private ownership, this list includes only the more accessible places, such as buildings or groups of buildings that can be viewed from the road or village street, houses open to the public, and church interiors.  Although many of the leading architects and designers are included, the list cannot hope to represent the range and quality of their work, and excludes examples located in the principal centres referred to above. The places listed are all in Gloucestershire unless otherwise stated, and are given roughly in order of location from north to south to help plan a journey through the region.

The Church of St. Katherine has Norman origins. It was rebuilt in the C15 and restored in 1926 by Sidney Barnsley, who also designed the pulpit and pews. The east window is by Morris & Co, 1912, for Mrs Henry Gordon Clegg, and was inspired by the Burne-Jones figures from a window in Oxford cathedral of 1878.  The vestry curtains are also of a Morris design. The west door and probably the altar rails are attributed to Norman Jewson and the woodwork is by Peter Waals, c.1931.  Not open to the public, the garden at Wormington Grange includes work by E. Guy Dawber, of 1919, and Jewson, c,1930, and has gates by Alfred Bucknell and a statue by Alec Miller.

Detmar Blow undertook repairs and alterations at Stanway House. Beside the main road, is the extraordinary war memorial by Alexander Fisher of 1920. Its bronze statue of George and the Dragon is set on a stone plinth by Sir Philip Stott of nearby Stanton, with carving by Eric Gill.

Snowshill House (National Trust), a manor house of C16 origin, was purchased in 1919 by Charles Paget Wade, who restored it and also designed the garden with M.H.Baillie Scott. The war memorial in the village is by F L Griggs.  C.E.Bateman repaired and altered two houses.  Tower Close is of C16 origin with a late C17 addition. It was converted into 3 cottages and Bateman converted it back to a single dwelling, 1914-20, for Sydney Bolton Russell, father of Gordon Russell.  Green Close was formerly a row of 4 cottages, converted by Bateman into a house for Mr H Peech. 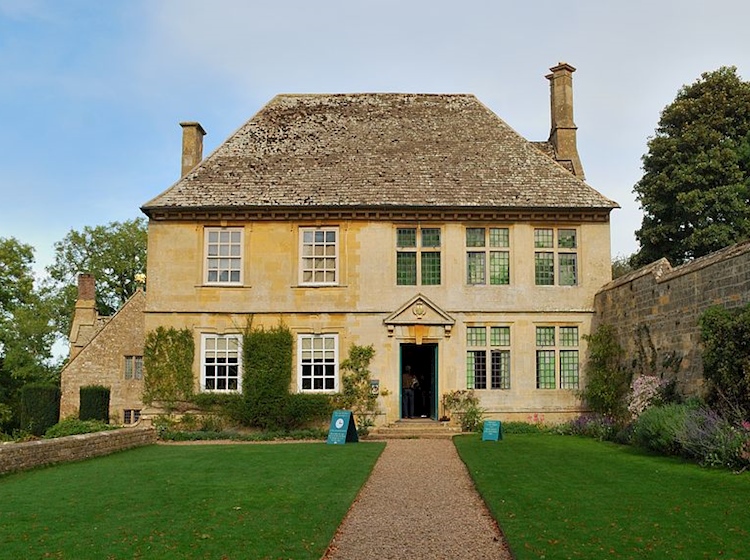 Renowned for its churchyard crammed with fine chest tombs and yews. The war memorial is by F.L.Griggs and Norman Jewson. Sidney Barnsley, William Curtis Green, and P R Morley-Horder contributed several key buildings, all with inscriptions carved by Eric Gill. Look out for Curtis Green’s Institute of 1906-7 in Bisley Street. On the hillside off Gyde Road, is Morley-Horder’s Gyde Orphanage of 1915-18, and Barnsley’s Gyde Almshouses, 1912-13, five pairs of semi-detached houses designed with typical understated flair and including a square gazebo.

The Church of St Alban in Parliament Street is a small mission church by Thomas Falconer built 1912-14. Its unprepossessing street frontage belies its extraordinary vibrant Byzantine-inspired interior. The rood screen with its painted figures is by Henry Payne.

Although Overbury sits beneath Bredon Hill in Worcestershire, its transformation was very much part of the Cotswold Arts and Crafts ethos. Richard Norman Shaw began remodelling the village for Robert Martin in the 1870s. After 1897, Richard Biddulph Martin continued the project till 1916, followed by his nephew, Robert Holland-Martin.  Shaw’s contribution included the distinctive post office and stores, village hall and the cottages near the church. Ernest Newton, first in his capacity as Shaw’s assistant and later in his own right, designed new houses and cottages, alterations and extensions, agricultural buildings, a water fountain (used as a bus shelter) and a horse pond, all incorporated cleverly into the whole. The pretty lychgate is by Herbert Baker, 1921. 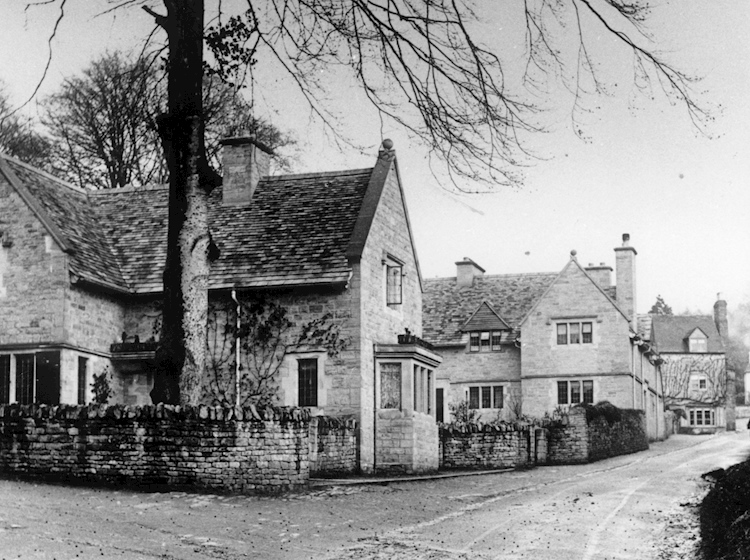 Many fine early C20 houses line the common including a few by the Barnsley brothers, Norman Jewson, Thomas Falconer and also Falconer, Baker & Campbell, including one with a butterfly plan by Falconer. The memorial cross in Minchinhampton is by Sidney Barnsley, 1919.

The Church of St Nicholas enjoys spectacular views. Norman in origin with a C14 chancel, it was restored c.1840, then again in 1902 by E. Guy Dawber and Arthur S. Flower. C.R.Ashbee re-roofed the chancel and in 1911 he designed its wrought-iron chandelier.  In the same year, Alec Miller made the figure of St Nicholas on the N door.  The screen in the N transept is by Gimson, c.1904, and the medieval altar has a reredos by Miller of 1925. Miller also designed the war memorial in the churchyard.

The home of Gimson and the Barnsley brothers, whose workshops and showrooms were at nearby Daneway House. Slabs of Edgworth limestone mark their tombs in the churchyard. The village hall of 1912-13 is by Ernest Barnsley for Lord Bathurst with assistance from Jewson, who also lived in Sapperton. The hall retains its original fittings including some splendid window seats.

Visible from the lane, Studio Cottage was built by Alfred Powell for himself after the War c.1920; the studio was added c.1932. Cruck-framed and weatherboarded, this is a remarkable celebration of timber building techniques. Garden includes ha-ha.

The Architecture of Sunderland

Treasures of the Great Silk Road

The Building of Georgian Chichester