‘The first time tanks were massed together for an attack occurred on 20th November 1917 during the Battle of Cambrai.’ This often-used statement has been the focus of many accounts of that battle. What is normally not discussed are the advances in technology and tactics on both sides.

The initial success of the British attack on the 20th November cannot just be put down to the use of tanks in large numbers. It was the new tactical way of combining airpower, artillery, infantry and armour by using infantry infiltration tactics, predicted artillery fire, sound ranging, battlefield intelligence and infantry-tank co-ordination. This new tactic was called ‘combined-arms warfare’.

The initial attack was a success because the enemy were taken by surprise. This was achieved through night-time transportation of supplies, men, tanks and guns to the front line to avoid detection and not following the traditional tactic of using artillery to ‘soften up’ enemy trenches days before the actual attack went forward.

Predicted artillery fire is a method of shelling enemy positions using detailed calculations and maps: often called ‘map shooting’. It enables shells to be fired on German trenches without first alerting the soldiers with ranging shots, which enabled them to seek shelter in deep dugouts before the main bombardment fell on their position. This new method of indirect fire could also deliver smoke shells to the correct location to cover the advance of the tanks and infantry.

The artillery needed good maps. By 1917 the British Army’s Field Survey Companies, with the help of old maps and aerial photographs, were able to produce accurate maps of the front line and beyond, deep into enemy territory. British Artillery gun batteries could now use these new maps to plot their position and that of the intended target. They could work out the range, bearing and elevation needed to bombard the area without having to use ranging shots first. 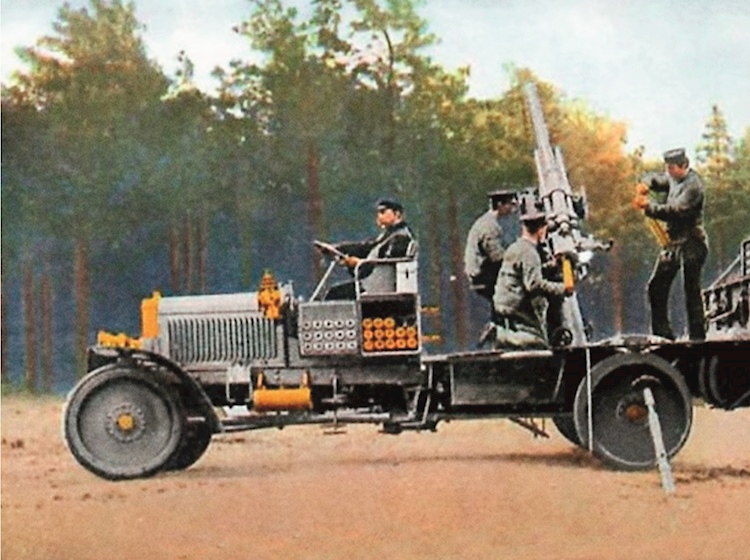 The British had learnt from their mistakes. Tanks cannot successfully cross a waterlogged landscape cratered by artillery shells. In the past, too many tanks had been abandoned having fallen into or got stuck in, deep shell craters. Major attacks in 1914, 1915 and 1916 had been preceded by a large blanket artillery barrage which made the terrain very difficult for tanks to negotiate.

The use of a new type of shell with a No. 106 shell fuse was introduced. It was designed to deliver high explosive shrapnel-filled shells to the target but without leaving a deep crater. As soon as the spindle sticking out of the nose of the shell hit anything solid it moved backwards and caused the fuse to detonate instantaneously. This above-surface exploding shell fuse was also used to cut barbed wire and burst smoke shells.

At the start of an attack, like that at the battle of Cambrai, British heavy artillery guns tried to put German artillery batteries out of action by using counter-battery suppression fire. Their positions would have been worked out on a map using a sound ranger. This involved a solider listening to a pair of microphones a few kilometres apart. When the enemy guns fired he would use a stop watch to record the time between the sound arriving at the different microphones. Other soldiers would be tasked to detect gun flashes and use a theodolite or compass to work out the bearing. Using this information artillery officers could then calculate the coordinates of the hostile battery.

The Royal Flying Corps pilots helped keep enemy reconnaissance flights away from British lines. They provided the artillery with aerial photographs, accurate information on enemy battery locations, the fall of shells and the current location of friendly forces.

The bundle of wood was used to help the Mark IV get across trenches.

A Royal Flying Corps reconnaissance aircraft spotted new German anti-tank obstacles. Some trenches had been widened to around 16 feet to make them difficult to cross. The British found the solution to this new problem by looking back in history. In Medieval times knights in armour solved the problem of how to cross moats and other large ditches by tying bundles of long, thin branches together and rolling them into the ditch. When the ditch was full of these bundles they could walk over them.

These 15ft diameter bundles of wood were called a ‘fascine’. The British Army adapted the Mark IV tanks to carry larger versions of these fascines on top of the tanks. Long roof rails were fitted along the vehicle’s length. The wood was cut to the same size and bound with chains. The bundles measured about 10 feet (3m) long and 4 feet 6 inches wide.

The fascines were secured to the tank’s roof with straps that could be released from the relative safety of the tank’s interior. As the lead tank reached the edge of the German trench the straps would be released and the bundle of wood would roll forward into the ditch. That tank would then move right and machine gun the enemy troops in the trench on its left, to make way for the next tank to deliver its load. The next tank would move forward and drop its fascine in the same place and move left to machine gun down the length of the trench on its right. This continued until the widened anti-tank trench was full of enough wood fascines to allow the rest of the tanks to breach the gap and cross to the other side and attack the German’s rear communication trenches and supply lines.

Tanks are good at attacking trenches, but they cannot hold captured ground. They can use their machine guns to fire down into enemy trenches as they cross them and drive along the length of them. At the Battle of Cambrai better infantry-tank co-ordination meant that troops moved up with the tanks and occupied the cleared trenches to prevent the Germans recapturing them.

Although the German anti-tank measure of widening the width of their trenches was not successful, the deployment of light field guns and the use of anti-aircraft guns as anti-tank guns in the second lines of defence was successful. In one skirmish German guns destroyed around 32 tanks near Flesquières.

Both sides deployed innovative technology and tactics during the Battle of Cambrai. This battle should be remembered for the first use of ‘combined-arms warfare’ rather than just the first successful massed tank attack.