Civilians in Palestine and Syria in the First World War

Today the attention of the world is focused on the unfolding humanitarian crisis in the Middle East, and the appalling conditions faced by those caught up in the fighting that is spreading across the region. However, for the most part the suffering of those same peoples has largely been ignored in the traditional historiography of the First World War. At best, the usual narratives refer to the despotic nature of Ottoman rule, how glad the people were to be ‘liberated’ by the British, and give a blanket assertion (based on the Revolt made famous by T. E. Lawrence) that all of the Arab peoples were fretting to gain independence from the Ottoman Empire.

Of course, this scant coverage is not unusual; while the British Home Front is well covered in the National Curriculum, national exhibitions like the Imperial War Museum, as well as in local history books and museums, we seldom see anything about how the war affected the civilians in the war zones of France and Belgium. However, a hundred years on, a proper examination of those caught in the middle of this clash of empires is long overdue.

One common misconception is the idea that the Arabs all wanted to fight the Ottomans. This simply is not true: far more Arabs fought for the Ottomans than against – either in the regular forces or as tribal forces against the Emir of Mecca’s revolt along the Hedjaz Railway in Arabia.  Records kept by the Ottomans and the British Army show that there was no disproportionate levels of desertion among the Arab troops fighting in Palestine and Syria, and in fact Arab troops fought with valour and determination at places like Beersheba in October 1917. This is remarkable given the levels of racism against Arabs shown by many of the more senior Ottoman officers, who tended to be Turkish and view their Arab troops as uneducated, disloyal brutes. Arabs generally did not have access to the kind of education that was needed to become officers themselves, although military schools were set up across Arabia and North Africa for this purpose. While it was true that there was much discontent among Arab populations in the Empire, much of this was a reaction to the rise to power since 1908 of the ‘Young Turks’ in Constantinople, who were very focused on Turkish issues and left large numbers of Arabs feeling alienated. While many local Arab populations and civil leaders wanted more devolved powers and freedoms, for most of them this was still to be achieved within the overall framework of the Ottoman Empire.

Major discontent among the Arab populations did not really begin until after the outbreak of the First World War, and much of this was the fault of Djemal Pasha, the Governor of Greater Syria (which included modern Syria and the whole area down to the Egyptian border). In his memoirs, Djemal recorded that:

‘The policy I desired to see pursued in Syria was a policy of clemency and tolerance. I left no stone unturned to create unity of views and sentiments in all the Arab countries.’

Elsewhere, he is recorded as having stated his policies to be: ‘for Palestine, deportation; for Syria, terrorization; for the Hedjaz, the army.’ He certainly set about these latter policies with a will. Leaving aside the more famous persecution of the Armenians (many of whom flooded into Palestine as refugees), he expelled 18,000 (out of about 90,000) Jews from Palestine, and banned them from Jerusalem and other major cities. Christians and Jews, who had traditionally been exempt from military service, were suddenly conscripted en masse to serve in labour battalions. Djemal also cracked down on Arab nationalists, including politicians, journalists and academics, in several waves of arrests and mass hangings in 1915 and 1916. Not for nothing was he known as ‘The Slaughterman’.

The effects of war

Quite apart from such crackdowns on political freedoms and liberties, the populations of Syria and Palestine began to suffer much more directly from the war. Trade with Europe and the outside world was suddenly cut off, denying farmers their overseas markets for such luxuries as oranges and olive oil. Instead, the Ottoman army descended, requisitioning anything and everything that they needed without payment. Not only food, but textiles and animals were seized as ‘war donations’.  One Jewish settler, Alexander Aaronsohn, recounted a typical incident:

‘A Turkish soldier, sauntering along the street, helped himself to fruit from the basket of an old vender, and went on without offering to pay a farthing. When the old man ventured to protest, the soldier turned like a flash and began beating him mercilessly, knocking him down and battering him until he was bruised, bleeding, and covered with the mud of the street. There was a hubbub; a crowd formed, through which a Turkish officer forced his way, demanding explanations. The soldier sketched the situation in a few words, whereupon the officer, turning to the old man, said impressively, “If a soldier of the Sultan should choose to heap filth on your head, it is for you to kiss his hand in gratitude.”’

Prices rose and supplies dwindled. Hunger, starvation and disease became rife, and the situation worsened even more in the spring and summer of 1915, when great swarms of locusts swept up from Egypt and destroyed the land. Crops and trees were consumed in moments as the billions of insects passed.  By July 1915, a local Muslim Arab in the Ottoman army, Private Ihsan Turjman recorded the situation in Jerusalem:

‘The government is trying (with futility) to bring food supplies, and disease is everywhere … Jerusalem has not seen worst days. Bread and flour supplies have almost totally dried up. Every day I pass the bakeries on my way to work, and I see a large number of women going home empty-handed. For several days the municipality distributed some kind of black bread to the poor, the likes of which I have never seen. People used to fight over the limited supplies, sometimes waiting in line until midnight.  Now, even that bread is no longer available.’

As the men were conscripted into the army, families struggled to farm their land or bring in enough money to pay for what little food was available. Even trees (including fruit and olive trees) were cut down in great swathes, to go towards the railways that were being built to support military operations. Not only was wood needed for use as sleepers, but also to burn in the engines. Palestine faced widespread and disastrous deforestation.

On top of these sufferings had to be added the actual fighting. Gaza had been one of the biggest cities in Palestine, but it was evacuated and almost destroyed in the battles there in 1917. Many other towns, villages and farms suffered similar fates as modern war descended on ancient sites. Nebi Samwil, for example, dated back to Herodian times, was the site of the tomb of the Prophet Samuel, had been the site of a Crusader castle, and was now a village built around a mosque. It also sat on the heights that dominated the western approaches to Jerusalem, and after the British took it in late November 1917, the Ottoman’s staged vigorous counter-attacks in an attempt to re-take it. Khalil al-Sakakini, a Christian Arab living in Jerusalem, could see the village from his house:

Tuesday 27 Nov 17 … Heavy shelling continued until the morning hours from various directions. At 3.00 p.m. the shelling reached an unprecedented intensity. The shells fell like drops of rain on the mosque of An-Nebi Samwil and its surroundings, and at 4.00 p.m. the minaret fell down, after having withstood so remarkably. Later shells started coming down on the mountain from its beginning to its end, on its sides, at its feet, and in the wadis around it, until it resembled an erupting volcano. At sunset the shells exploded with blinding flashes … God knows the number of dead and wounded … Undoubtedly it is enormous.

If, despite the destruction that inevitably came with them, the arrival of the British Army was met with warm welcomes in most areas, it was because they brought with them money and markets, providing a stable economy and physical and financial security. The British, whether as individuals or as an organisation, paid for what food or other resources they obtained from the locals. Some troops in their diaries or memoirs record feeling cheated by high prices, but, after such lean and desperate years, local farmers can be forgiven for making the most of their windfall. Not only did these huge markets for goods suddenly arrive on their doorstep, but the channels for trade with the wider world – Egypt and Europe – suddenly opened as well. Many felt uncertainty about the future under British rule, and the new political limitations or freedoms that might bring, but for now they signalled the end of immediate hunger and hardship, and that was to be celebrated more than any supposed ‘liberation’ from the Ottomans.

An Egyptian woman with her baby 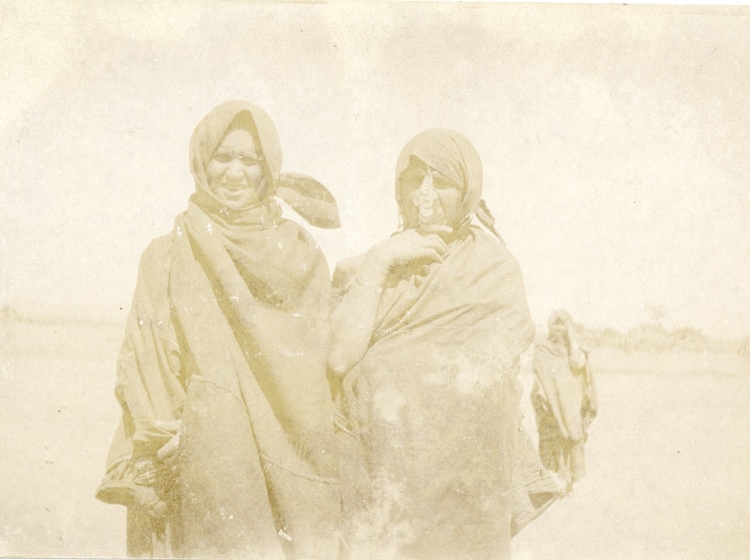