Chapel Street: The bravest little street of World War I

In 1914, when the Great War broke out Chapel Street, Altrincham, Cheshire saw 161 men volunteer for duty from just 60 houses.

Chapel Street was a long and narrow cul-de-sac of Georgian and Victorian houses, it was home to a four hundred strong multi-cultural (Scottish, Welsh, English, Italian and Jewish) community of lodgers and their families. Mostly, these were Irish diaspora forced to leave Ireland for work and those of Irish heritage, born in England.

Altrincham was not a Garrison town, but it was patriotic with many of its sons having fought in the Boer War. At the start of World War I the Roman Catholic Church urged that Irishmen join the regiments to ‘Come to the aid of little Catholic Belgium’, after the university town of Leuven was ransacked by the Germans. Leuven was the Irish cultural and language capital of Europe, and the German outrage perceived as a strike on Ireland and the Church. The contentious promise of Home Rule; and the insistent, urging recruitment speech of John Redmond, given in Manchester were also attestment considerations.

They served in all the theatres and campaigns of the Western Front at Mons, Ypres, Neuve Chapelle, Passchendaele and Loos; all the battles of the Somme, Picardy; the Italian Front; the Dardanelles Campaign: Gallipoli (including its infamous evacuation); Mesopotamia (present-day Iraq) for the relief of Kut; the Middle East: Gaza and Palestine (liberating Jerusalem Christmas 1917 as promised by the Prime Minister Lloyd George, after 673 years of Muslim rule) and Salonika, Greece (Macedonian Front) where the defeat of the Turks and the Bulgarians brought the war to its end. 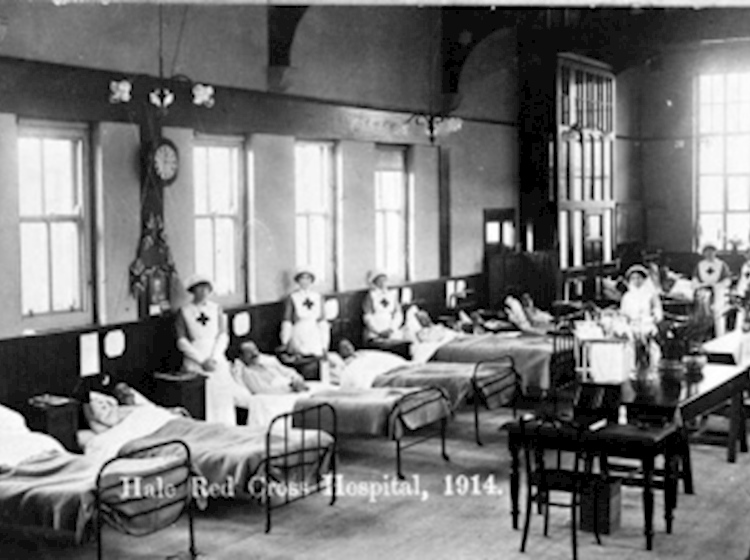 Many of the men were awarded Gallantry medals such as the Distinguished Conduct Medal and Military Medal, for their valour. Their exploits included the rescue of future Prime Minister Harold Macmillan from a slit trench on the Somme battlefield and the rescue of the future father of children’s author Dick King Smith (children’s author), who lay injured on a Salonika battlefield and was carried on the back of a soldier over no-man’s-land, under enemy fire. Also, for a famous trench raid commended by ‘Bing of Vimy’, which garnered vital information used at the Battle of Vimy Ridge.

Collectively the men experienced the affects of gas, bullet, and shell wounds; torpedo attack and shipwreck; and capture as German and Bulgarian prisoners of war. More men were recorded as ‘Missing in Action’ than anywhere else in Britain.

King George V recognised their sacrifice and paid tribute to the residents in a personal telegram. He acknowledged Chapel Street as ‘the bravest little street in England’.

It was acknowledged before the outbreak of war that auxiliary hospitals would be needed in the event of war. Preparations were made to utilise appropriate buildings in the form of private housing, schools and other suitable accommodation. These were to be staffed by paid position and would also rely on local voluntary nursing assistance. Women were taught home nursing and hygiene, and cookery and had to pass exams to receive their first aid and nursing certificates. They could take further, more specialised training courses. They became known as VADs (Voluntary Aid Detachment). Some three thousand Red Cross auxiliary hospitals were set up in Britain and these came under the control of the military hospitals.

Some fourteen auxiliary hospitals were situated around the Altrincham area. Lord Stamford permitted the use of the Dunham Estate as a Military Red Cross Hospital, specifying that it was to treat all ranks of men. Sir John Leigh,  1st Baronet of Altrincham, and wealthy mill-owner bought and equipped a large house called Haigh Lawn, for the sole purpose of caring for wounded men needing to convalesce. Part of the voluntary effort to rehabilitate soldiers and prepare their families for the aftermath of war and the injuries incurred saw the Hale Congregational Church allow the use of its school Chapel and facilities, and it became known as Hale Red Cross Hospital.

Altrincham is also noted for its Anglican vicar of this time, the Reverend Hewlett Johnson of St. Margaret’s, Bowdon. Reverend Johnson was a committed pacifist who later became famous as the Red Dean of Canterbury. His experiences of poverty before, during and after the war, especially in the Chapel Street and Regent Road area (then the richest parish in England) helped to form his views of active Christian spirituality.

The present Reverend of St. Margaret’s church, Jerry Sutton (Army Chaplain), states that Reverend Johnson was a powerful man who stirred up emotions within people. Many locals were angry with him during the war, for officiating at the funerals of deceased German POW’s and granting them a dignified Christian burial. During the war the Reverend and his wife were at the forefront of establishing Haigh Lawn auxiliary hospital as a model of community care. Notably and controversially, after the war Reverend Johnson did not respond to the important written request made to him, for permission for the publicly subscribed Chapel Street Roll of Honour to be fixed to the wall of the parish church that stood at the entrance to the street. In the years after the war, and as part of his Christian ministry, the Reverend Johnson and his wife organised holidays to camps in various parts of Wales; these were offered to poor children in Altrincham, to give them a change of scenery, and for the purpose of breaking down social class divisions and gender barriers – this was a pioneering idea for its time.

In later years Rev. Johnson, a gifted orator, could command large crowds at Wembley Stadium. He was a member of the British Peace Assembly and travelled the world campaigning extensively to ban the Atom bomb. This contrasts with the actions of Premier Harold Macmillan, who when in office, avidly supported the research and development of the Hydrogen bomb.

This is the story of the people of Altrincham, Cheshire and war, and its legacy of red and white poppies.