Britain was full of expectation during the early months of 1887. Her Majesty Victoria, Queen of Great Britain and Ireland and Empress of India had been on the throne for half a century – most of that time spent out of the public spotlight in mourning for her husband and consort, Prince Albert of Saxe-Coburg and Gotha, who died of typhoid in 1861, aged 42.

Mounting pressure from politicians, the press and public had forced the 68-year-old monarch to take a more public role in life again, something she reluctantly agreed to do on the occasion of her Golden Jubilee in 1887.

It was decreed that the entire year marking one of the greatest reigns in history would be one of celebration, climaxing in festivities and public holidays. It would include street parades through London, with Victoria herself in a carriage as its centrepiece – the first time she would be seen by so many subjects for over 25 years. There would be a Thanksgiving Service at Westminster Abbey, picnics, parties, grand balls, sporting and artistic events plus an extended holiday weekend during the month of June offering a chance for some fun.

Most of Europe’s crowned heads, along with Presidents, Prime Ministers and potentates from large and small nations, planned to be in London for the Jubilee. Half of Europe’s crowned heads already claimed connections with Queen Victoria through marriage, so the presence of Kings, Kaisers, Emperors, Queens, Princes, Princesses, Marquises, Grand Dukes and their equally Grand Duchesses was assured. A visit to London in June 1887 would demonstrate their close ties with Britain and allegiance to the most powerful nation on earth.

Victoria’s Jubilee was to be a very British affair. Foreigners were welcome to attend, witness, and marvel – but only from a distance. The event was a celebration of everything British; industrial power, artistic achievements, military victories and Imperial domination. It was an opportunity for the rest of the world to pay homage to the lady who had been dubbed ‘the widow of Windsor’ and who sat at the head of an Empire of tens of millions, most of whom would never see the plump little woman in black sitting on her golden throne.

But there was an exception. Without seeking anyone’s official permission, the United States of America announced its intention to send a large delegation to the festivities. Britain’s ‘American cousins’ planned to celebrate the Jubilee in a unique way, giving tens of thousands of Britons flocking to London for the event a special transatlantic treat.

Supported by a large body of influential politicians and businessmen (including Lord Randolph Churchill and his American-born wife, Jennie), the event was to be a showplace for America’s own achievements, inventions and resources. It was designed to demonstrate that the Yankees were every bit as good – perhaps better and even more advanced – than the British.

What the Americans planned for London was a unique ‘American Exhibition’ right in the heart of Britain’s capital, showing off everything that they claimed to lead the world with at the time. It was set to rival Prince Albert’s own Great Exhibition of 1851, held in Hyde Park.

The American Exhibition was to be more than a trade fair presented by enterprising sellers for potential buyers. Entertainment, attractions, music, fine arts, food, drink and fun would also surround what the Illustrated London News predicted would be ‘a complete collection of the productions of the soil, and of the mines and the manufactures of the United States, than has ever yet been shown in England at any international exhibition.’ London was told to prepare itself for ‘a six-months long celebration of America and its achievements, transplanted three thousand miles from the New World into the heart of an old one.’

News about the American Exhibition was enthusiastically received. The Illustrated London News reported:

“… it is an idea worthy of that thorough-going and enterprising people. We frankly and gladly allow that there is a natural and sentimental view of the design, which will go far to obtain for it a hearty welcome in England. The progress of the United States, now the largest community of the English race on the face of the earth, though not in political union with Great Britain, yet intimately connected with us by social sympathies, by a common language and literature, by ancestral traditions and many centuries of a common history, by much remaining similarity of civil institutions, laws, morals, and manners, by the same forms of religion, by the same attachment to the principles of order and freedom, and by the mutual interchange of benefits in a vast commerce and in the materials and sustenance of their staple industries, is a proper subject of congratulation… And we take it kindly of the great kindred people of the United States, that they now send such a magnificent representation to the Fatherland, determined to take some part in celebrating the Jubilee of Her Majesty the Queen.”

The publication stated that the idea for an American Exhibition had been three years in the making, and: ‘after much thought and toil and the expenditure of many thousands of pounds, at length it assumed a definite shape… And Londoners and visitors from the country will be able to enjoy the results, in what promises to be one of the greatest, most original, and most instructive of similar Exhibitions.’

Advance information published in other British newspapers also revealed that the sole imported Jubilee event would include something called:

“Buffalo Bill’s Wild West Exhibition… The preparations for this unique entertainment have been very extensive; they were made under the supervision of Major J.M. Burke, general manager of the Wild West. This remarkable exhibition has created a furore in America, and the reason is easy to understand. It is not a circus, nor indeed is it acting at all in a theatrical sense; but an exact reproduction of daily scenes in frontier life, as experienced and enacted by the very people who now form the Wild West Company… It could only be possible for such a remarkable undertaking to be carried out by a remarkable man; and the Hon. W.F. Cody, known as ‘Buffalo Bill,’ guide, scout, hunter, trapper, Indian fighter and legislator is a remarkable man. He is a perfect horseman, an unerring shot, a man of magnificent presence and physique, ignorant of the meaning of fear or fatigue; his life is a history of hairbreadth escapes, and deeds of daring, generosity, and self-sacrifice, which compare very favourably with the chivalric actions of romance, and he has not been inappropriately designated the ‘Bayard of the Plains’.”

This and other articles provided British newspaper readers with their first encounter with the name of Colonel William Frederick Cody – ‘Buffalo Bill’ – although readers of cheaply produced ‘dime’ novels published in America
and exported to Britain needed no introduction. The British would take the American hero to their hearts for the next 17 years and remember him fondly for generations afterwards. Cody was already a household name in America, a dime novel superstar, heroic actor playing himself in theatricals about fighting savage Indians, a frontiersman, army scout and buffalo hunter. 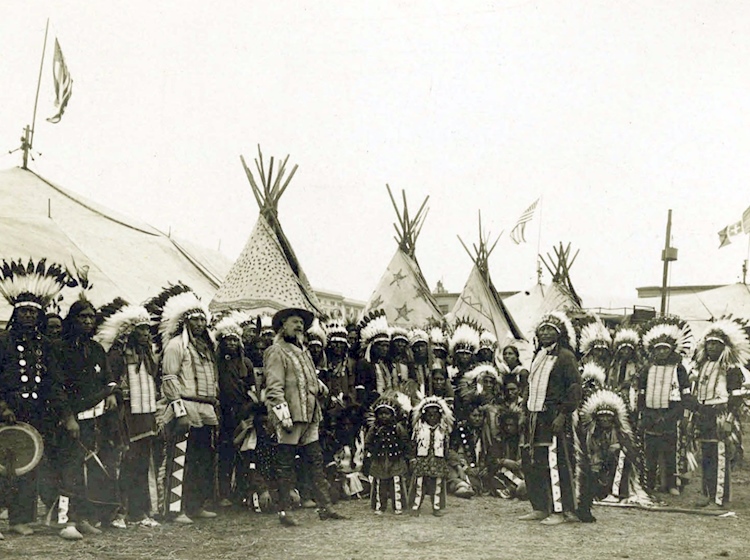 Now he was coming to London in the role which had made him so famous at home, as a showman reproducing life in America’s untamed west for folks living in the civilised east who had never seen genuine Indians or hard-living cowboys, ridden a stagecoach, witnessed sharpshooters in action or thrilled as a bronco buster hung on for life to the back of a wild mustang. Throughout the late Victorian and Edwardian era, he would inspire Punch cartoons, a souvenir industry and possibly some of the worst poetry ever written.

John Robinson Whitley, President of the American Exhibition, said that Buffalo Bill was: ‘every bit as much a genuine product of American soil as Edison’s telephones and Pullman’s railway cars.’