Bloody Easter 1916: The Liverpool Irish in Dublin and France

Just before Easter 1916, Percy Beazley, strode along Dale Street in Liverpool wearing a military uniform, he was a man on a mission. As he passed, British soldiers sprung to attention and whipped off smart salutes. This was not, however, just another wartime street scene in Liverpool.

Percy Beazley was in fact Piaras Béaslaí, born in Liverpool, the son of Irish parents, his father was the editor of the Catholic Times. Béaslaí was also an officer of the Irish Volunteers and he wore their uniform, rather than that of a British dominion officer which had tricked the unsuspecting soldiers into paying their respects. As a boy Béaslaí had always been fascinated by Ireland, its culture and language. Having moved to Ireland in 1906, he Gaelicised his name and later became involved in the Irish Republican Brotherhood (IRB). In 1916, he was on his way to a rendezvous to deliver a cypher about an arms shipment bound for Ireland. He was not alone in his affection for Ireland. The descendants of the Irish diaspora in Liverpool were constantly reminded of their Irishness, at home they were inculcated with Irish history and culture. At election time, an Irish nationalist councillor exhorted them to remember that ‘they were Irish first’, while others mischievously encouraged them to ‘vote early and vote often’. They dutifully voted for the only Irish Nationalist MP in England, the urbane and eloquent T.P. O’Connor who represented the Irish stronghold of Liverpool’s Scotland division.

In 1914, political tensions in Liverpool were heightened by the Home Rule crisis and the city was divided along sectarian lines. There was an additional division among Irish nationalists in Ireland and Liverpool when war was declared in August 1914. The Irish National Volunteers split. Most Irish nationalists in Ireland and Liverpool remained loyal to the constitutional politics of the Irish Parliamentary Party led by John Redmond. Other more advanced nationalists espoused the physical force doctrine of the IRB. However, their numbers were small. One IRB member estimated the numbers of advanced nationalists in Liverpool at just seventy-five men. Liverpool’s advanced nationalists, like those in Ireland, believed that their obligation was to Ireland, not England and that their quarrel lay with England, not Germany. They dismissed reports of German atrocities in Catholic Belgium as British propaganda. For them Ireland’s struggle was more important than ‘poor little Belgium’.

With Home Rule secured John Redmond, leader of the Irish Parliamentary Party urged Irishmen to go wherever the ‘firing line extends’. T.P. O’Connor led a recruiting drive, and Liverpool’s Irishmen rushed to the colours. Between August and December 1914, some 3,600 men enlisted in their own 8th (Irish) battalion of the King’s Liverpool Regiment. In June 1915, the battalion had been in France for just a few weeks when they were unexpectedly rushed into action during the Battle of Festubert, and suffered heavy casualties. 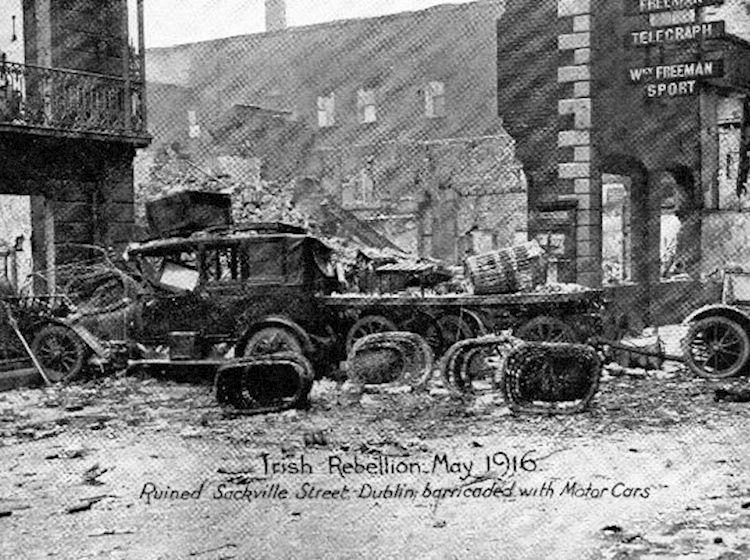 Throughout the weeks prior to Easter 1916, at Blaireville, south of Arras, the battalion prepared to avenge their dead comrades. Captain Harold Mahon, a trained army scout, planned a raid on the German trenches. Mahon’s hand-picked Liverpool Irishmen trained in a special area behind the lines. On the night prior to the raid, Mahon and others intended to cut the German wire in preparation for the main assault. The following night, 17th/18th April 1916, the raiding party led by Lieutenant Baxter made their way towards the German lines, intending to kill and capture the enemy. However, the Liverpool Irishmen had no intention of taking prisoners.

A pre-arranged artillery bombardment of the German lines helped to cover any noise made by the raiders. This proved crucial, as the pin of a grenade which Lieutenant Baxter was holding became loose and was about to explode. Luckily he removed the detonator and buried it in the mud before it exploded. Once inside the German trench, the Liverpool Irishmen began to kill every German they met.

Lieutenant Baxter waited and accounted for every member of his party to return. However, for reasons unknown, he returned to the German trench. The Liverpool Irish sent out patrols but were unable to locate him. A few days later, a German deserter revealed that the Germans had sustained fifty-seven casualties during the raid. Later, the British were informed that Baxter had been killed. He was posthumously awarded the Victoria Cross for his actions, while other members of the battalion received Distinguished Service medal and Military Medals. 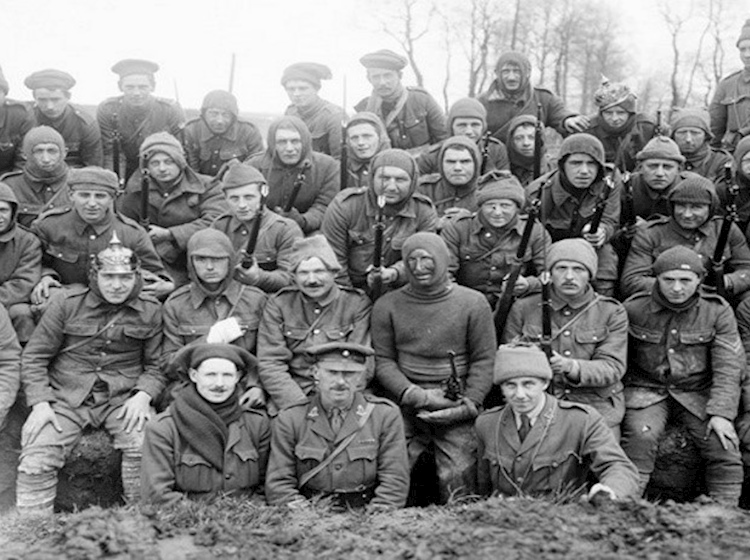 The raiding party of the 8th (Irish) Batallion, King's Liverpool Regiment photorgaphed after their famous raid.

The British high command were delighted with the offensive spirit of the Liverpool Irish. Throughout Easter week they were inspected and lauded by various members of the hierarchy and were mentioned in Sir Douglas Haig Dispatches. Back in Liverpool, the papers hailed them as heroes and carried various accounts of the raid.

Concerned about the introduction of conscription, the advanced nationalists in Liverpool made their way to Ireland. Many of them became affectionately known as the Liverpool Lambs. In the weeks before Easter 1916, they spent their time constructing home-made bombs and preparing weapons in readiness for action against British in Ireland. On 24 April 1916, the Liverpool Lambs marched out of their respective billets with their rebel comrades to initiate the Rising at several locations throughout Dublin. The Easter Rising was a brief, yet bloody affair and the British artillery had reduced parts of Dublin to rubble. Contemporary postcards depicted the city as ‘Ypres on the Liffey’. Piaras Béaslaí and the small but determined band of Liverpool Irish brothers accomplished what they set out to do; to strike a blow for Irish freedom. 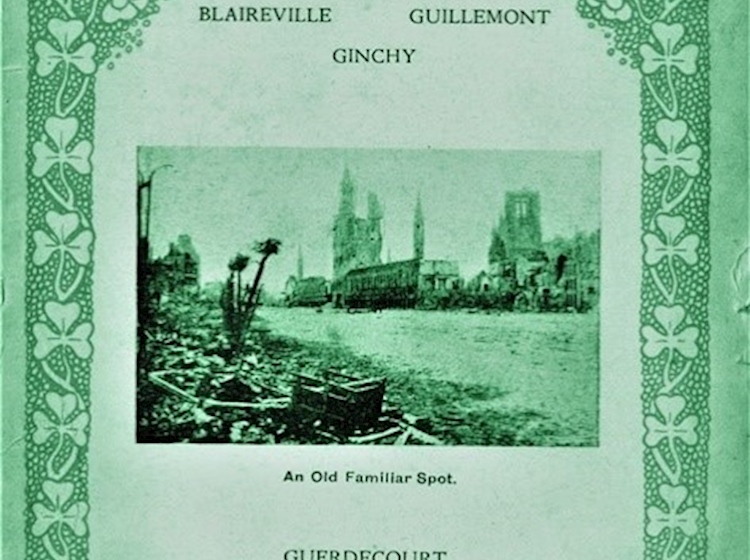 A 1917 Christmas Card sent by a soldier of the Liverpool Irish Batallion.

The men of the 8th (Irish) battalion of the King’s Liverpool Regiment and their former friends and neighbours in the Liverpool Lambs who volunteered to fight in Dublin at Easter 1916 had more in common than not. They shared their Catholic faith, their Irishness and a fervent belief in Ireland’s right to self-determination. While the necrology of Dublin in Easter 1916 fails to compare with the obscene body count on the Western Front, Liverpool’s Irishmen, whatever their uniform or allegiance witnessed a bloody Easter.

Discover more about World War I