Aviation landmarks of Norfolk and Suffolk

Throughout Norfolk and Suffolk many landmarks still remain which point to the strategic importance of these counties in the First and Second World Wars and during the Cold War. These include airfields and traces of their buildings, remains of former radar stations, decoy airfields and many other sites which at the time were highly secretive.

Churches, memorials and museums provide abundant evidence of aviation’s past but there are also less obvious connections in local pubs, country houses, streets and even in village signs. Peter Gunn discusses in detail many of these sites in a way which should appeal to the general reader and aviation enthusiast alike.

Artist's impression of the Zeppelin raid on St Mary's Church, Snettisham in 1915 by Ben Mullarkey

Artist’s impression of the bombing of St Mary’s Church, Snettisham, Norfolk, on the night of 19 Jan 1915 by Zeppelin L4. This was claimed to be the first church in England hit by a German bomb.

The Fox and Pheasant with personnel from 107 Squadron

No. 107 Squadron personnel outside the Fox and Pheasant pub, Great Massingham, during the summer of 1941 (nicknamed the ‘Poxy Peasant’). The squadron was equipped with Blenheim IV light bombers and suffered very heavy losses attacking targets in occupied Europe. Few were to survive the war. The former pub is now a private house.

Gloster Gladiator of No. 401 Meteorological Flight taking off from Bircham Newton during 1941. Squadrons from RAF Coastal Command operated from the station throughout the war as well as several meteorological units.

The fort-type control tower at Bircham Newton dating from the late 1930s. The airfield closed in 1962 and in 1966 was taken over by the Construction Industry Training Board (CITB). Many of the original buildings have survived but the control tower was demolished in 2010.

The village sign at Pulham St Mary, Norfolk, depicting the R33 airship at its mooring mast. Pulham was a base for airships from the end of the First World War. On the night of 16 Apr 1925 the R33 broke loose from its mooring and was damaged during severe gales and, carrying a small crew of 20 men, drifted across the North Sea. After over 20 hours the storm abated and the crew were able to regain control and the airship limped back to Pulham to be  greeted by cheering crowds. Several of the crew were awarded decorations for this episode.

Named after the famous aviator, the Douglas Bader pub

The Douglas Bader pub at Martlesham Heath. Martlesham opened in 1917 and served as an active station until 1963. During the Battle of Britain a number of fighter squadrons were stationed there and Douglas Bader was one of the many famous pilots who served at the station. Bader was present at the opening of the Douglas Bader Pub and Restaurant in Sep 1979.

Martlesham Control Tower. After the closure of the airfield the control tower was refurbished and opened as a museum in 2000 by the Martlesham Heath Aviation Society.

Memorial to three brothers killed in the Second World War

Stained glass window memorial to the three Deck brothers in St Peter’s Church, Westleton. James Deck was killed in Nov 1941 while flying a Typhoon and was buried at Honington All Saints churchyard. Harold Deck was an observer in a Boston crew shot down over Germany in Jul 1942. His grave is at Sage War Cemetery, Germany. Charles Deck was shot down in a Tempest while attacking a German airfield in Apr 1945. He is commemorated on the Runnymede Air Forces Memorial.

Memorial to the 34th Bombardment Group of the USAAF

Memorial to the 34th Bombardment Group of the USAAF in St Mary’s Churchyard, Mendlesham. The group served at Mendlesham from Apr 1944 until Jun 1945 and flew 170 missions over enemy territory for the loss of 34 aircraft. 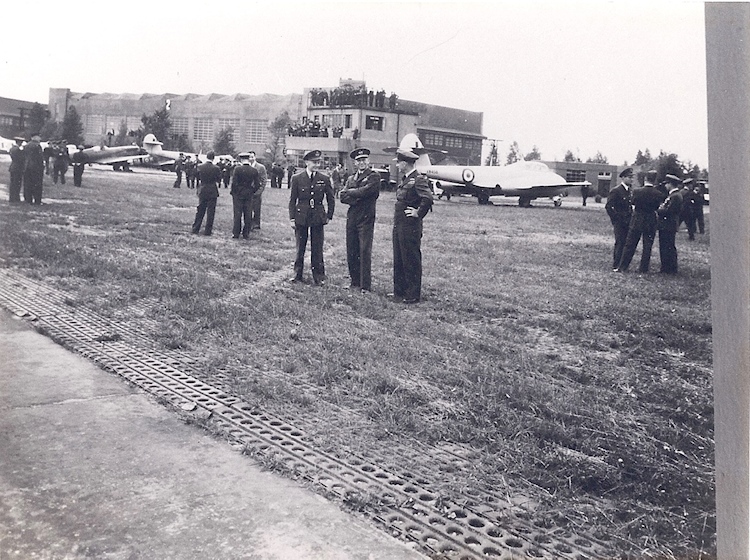 West Raynham 1946. A busy day at the Central Fighter Establishment. Two Meteors and a Spitfire in the background.

A UFO trail marks the sites of some eerie sightings

Rendlesham Forest UFO trail. The Forestry Commission walk where there were alleged sightings of an unidentified flying object in Dec 1980, close to the Cold War bases of Bentwaters and Woodbridge. This has never been satisfactorily explained.