The Dublin Foundling Hospital is the subject of a fascinating new book The Least of These by Mark B Roe. We caught up with the author to ask him about his approach to the work.

Why did you find the story of the Dublin Foundling Hospital so compelling?

Firstly, its sheer scale. My research reveals for the first time that approximately 127,000 children were admitted, and of these 80,000 to 100,000 died - with the larger figure being by far the more likely.

Secondly, the enigmatic nature of the Hospital itself. Located behind high walls on the edge of the city, and described by one observer as like a small walled town, it was a self-contained world. I try to uncover and describe that world.

What approach do you take to telling the story?

Although I provide plenty of facts and figures (including a breakdown of admissions for every year from 1730 to 1830), I try to tell the story through the lives of individuals where possible. Eye-witness accounts, background detail, and even some letters are used to bring the world of the Hospital to life.

How did the Dublin Foundling Hospital compare to its London equivalent?

The Dublin Foundling Hospital was older, opening about 10 years earlier. And it was a far larger operation, admitting 5 to 10 times as many children annually as London for most of its existence. Also they differed in aims. While the London Foundling Hospital was a private charity, Dublin was essentially state-funded. One of its motivations was to raise the children as Protestants who, it was assumed, would be loyal to British rule in Ireland, thus helping to protect Britain’s strategic interests.

How were abandoned babies treated at the time?

Before the Hospital opened abandoned babies were the responsibility of the Anglican church parishes, which provided a form of local government. Probably because they were unable to afford the care of these children the practice of ‘lifting’ and ‘dropping’ arose in the city. That is, if an infant was found abandoned, a church functionary would secretly convey it to a neighbouring parish and abandon it there - only for the process to be repeated by that parish. This game of ‘pass the parcel’ apparently led to the deaths of many infants. In 1730 the decision was made to turn the Workhouse into a foundling hospital, in part to end this practice.

Another common practice was the feeding of opium to infants, which almost inevitably hastened their decline.

Women are often marginalised in the historical record. Do women feature in the story of the Hospital?

One of the fascinating things about the material I uncovered was the insight it gives into the lives of Dublin women in the Georgian era. These are mostly poor women – parish nurses, Hospital staff of various levels, and mothers in crisis. From nursemaids in the Hospital, who used their own meagre wages and entrepreneurial spirit to supplement the diet of the children, to the seamstress who brought a sexual assault charge against the most powerful man in the Hospital, the consequences these women faced for their actions are explored.

But the largest group consisted of the country-based wet nurses who raised children under contract to the Hospital. Many thousands of them flocked annually to James’s Street in their distinctive rural dress, with their infants, to be inspected and receive their pay - a feature of Dublin life long forgotten. At the time these women were often blamed for the deaths of infants in their care. But modern research suggests it was the poor condition of the infants when they were handed over to the wet nurses which accounts for most of the deaths. High-ranking women also feature, such as the aristocratic Lady Arbella Denny, a woman of firm principles who dominated the Hospital for several decades. Her well-intentioned actions probably prolonged the Hospital’s existence by many years. The book considers how she was able to achieve her aims in a male-dominated world.

What was the most fascinating thing about your research?

Finding details of individual lives from 300 years ago, long buried in the records. From the ‘Out-matron’ whose job it was to recruit hundreds of women to act as wet nurses, to the genteel and elderly headmistress who could scarcely be seen nor heard by the 400 children in the single huge classroom over which she presided. From the drunken apothecary who ruined his career by publicly mocking one of the Governors, to the young idealistic surgeon bent on reform. From the inmates who plotted to confront the powerful Governors with their plight, to the children who yearned to escape the Hospital and return to their country nurses.

What else does your book add to our knowledge of Dublin history?

My research also uncovered the existence of an early Dublin workhouse – probably Dublin’s first - previously undescribed by historians. Other little-known incidents include mini-riots in the Hospital, the kidnappings of children by their distraught foster-mothers unwilling to relinquish their care, and a shocking 1797 medical scandal involving one of the country’s most eminent physicians. 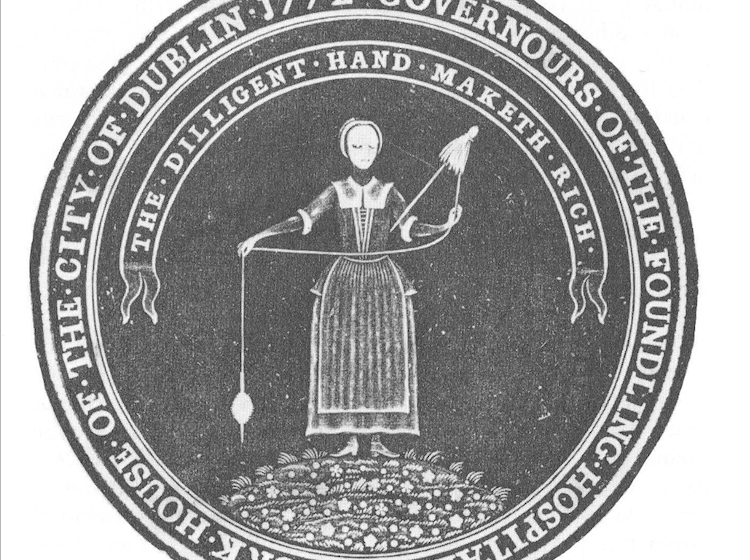