Are statues for the birds?

Our stories will survive and be retold one day as a part of a time and place - if our futures know where and how to look.

This bottom left-hand corner of these beautiful islands has never really gone in for statues - although we have a goodly number - yet we do have a vivid history of extraordinary people who did remarkable things and passed this way without ever making it onto a plinth but thankfully their stories survive, if you know where and how to look.

So traditionally we seem to put more store in stories than statues here in the South West, always mindful of the words of Mark Antony on how we remember people when he usefully remarked that, “The evil that men do lives after them; the good is oft interred with their bones.”

Take dear old Dolly Pentreath for example, who probably didn’t have an evil bone in her body, yet although she does have a monument - at Paul Parish Church in Cornwall - she has no statue. She was simply a poor fishwife living in Mousehole in the 1700s and swore like a trooper - although her expletives were confined to the Cornish language - for she was, reputedly, the last fluent speaker of that ancient tongue. She would certainly be the first to have confessed at the end of her colourful 102-year life to having been neither ‘great nor good’ - the basic requirements it seems to warrant a statue. But her wonderful story should be remembered and celebrated along with so many others who were once the flesh and bones - if not also part of the very soul of this place.

Meanwhile in Devon - some 500-odd years after he made his indelible mark on the English language, no one has yet got around to erecting even a plaque to Alexander Barclay. He was the Oxford don who, in 1508, was sent to chastise the errant monks of Ottery St.Mary whom he found not only ‘hawking and wenching’ but also ‘telling such gestes as of Robin Hood’ but what’s more, ‘playing real tennis’.

His indelible mark? He took an ancient tale from Plato and coined a phrase to perfectly sum up the shenanigans to describe that whole clerical crew of ne’r-do-wells as “A Ship of Fools!”

Although we use the phrase to this day his use of it - and the blisteringly perceptive poem in which it was contained -  did not make him popular in Devon and having rubbed too many people up the wrong way, he left the county, changed his religion and ended his days peacefully, in far flung Croydon.

The biggest monument in the South West of course marks the burial place of 1,200 Frenchmen and 271 Americans who died in Devon during the Napoleonic Wars of 1809-1816 and the Anglo-American War of 1812-16. They are buried in unmarked graves in a field to the west of Dartmoor prison.

Purpose-built to confine them it was - and remains - a bleak looking granite edifice  in the middle of nowhere but it must have appeared as a vision of heaven-on-earth to the sick, ragged men marched out from the rotting prison hulks in Plymouth Sound that late May morning in 1809, to take up residence for the first time. Their stories will never be told and only their memory remains. Unless that is, you visit some of the surrounding towns where some prisoners were let out on parole: Ashburton, Okehampton, Moretonhampstead and Tavistock ,whilst periodically French officers were also billeted at Tiverton.

They walked those streets, had lodgings in those houses and ‘enjoyed the company’ of many a Devon lass, prompting this report back to the Governor: “Some of them have made overtures of marriage to women in the neighbourhood which the magistrates have very properly taken pains to discourage”. One thinks perhaps of the Second World War and the impact some American servicemen had on some communities, who described them as being ‘over- sexed, over-paid and over here’.

Perhaps the most extraordinary ‘statue’ ever, anywhere, appeared in the grounds of Pentillie Castle, St Mellion, Cornwall in 1713. It took the form of a knight of the realm, one Sir James Tillie, who after death had left precise instructions  that whilst still warm, his body was to be dressed in finery, his best wig on his head, and tied firmly, sitting bolt upright in his favourite armchair and set on a plinth looking out over his domain, so convinced was he that he would quickly return to life and pick up again where he left off.

His widow - poor woman - and his servants obeyed his wishes to the letter, carrying out food and drink - along with pipe and tobacco at regular intervals.  The body stayed there for three winters and four long, hot summers before someone cried ‘Enough!’ Tillie’s tale is extraordinary but true. He was described charitably as ‘something of a rogue’ by one contemporary Cornish chronicler and by another as, ‘an extraordinary man of dubious character who was honoured by some but loved by none.’

Few of us will finish up as a statue of course but more importantly every one of us has a story and our stories will survive and be retold one day as a part of a time and place - if our futures know where and how to look. 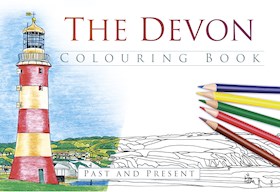 The Devon Colouring Book: Past and Present

The People of Devon in the First World War

Not a Guide to: Exeter