Daughter of King Alfred the Great and sister of Edward the Elder, Aethelflaed, Lady of Mercia was one of the most powerful and influential women in Anglo-Saxon England, yet she is one of the great forgotten figures in British history. Aethelflaed (also known by the Victorian spelling of Elthelfleda) was a formidable warrior and a brilliant diplomat – she led armies, built fortresses and successfully campaigned against the Vikings, but few are aware of her legacy and the significant role she played in the history and making of a united England. Linked to many places throughout the country, we can use these locations to uncover her remarkable story... 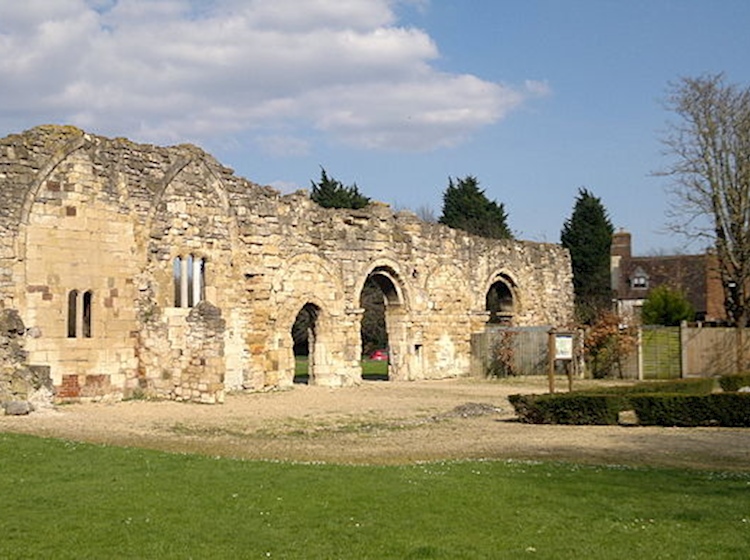 The ruins of St Oswald’s Priory from the South Side

Around 890 (the date is disputed) Aethelflaed and Aethelred founded the Priory of St Oswald in Gloucester, initially dedicating the minster to the St Peter. Although the building was small, it was embellished with rich sculpture. In 909, Aetheflaed’s brother, Edward, sent a West Saxon and Mercian force to raid the northern Danish territory during which the remains of the royal Northumbrian saint Oswald were seized. They were taken from his resting place in Bardney Abbey, Lincolnshire to Gloucester and Aethelflaed had them translated to the new minster, which was renamed St Oswald’s in his honour. In the late 9th century Gloucester had been fortified by Aethelred and Aethelflaed, who repaired its ancient Roman defences and turned it in to a burh with street plans. The relics in the priory gave the minster great prestige as St Oswald was not only a ruling monarch, but one of the most important founding saints of Anglo-Saxon Christianity. The decision to translate his relics demonstrates the importance of Gloucester to both Aethelred and Aethelflaed, one of the main seats of their power. When Aethelred died in 911 he was buried in their foundation, St Oswald’s Priory. Aethelflaed died at Tamworth in 918 and her body was carried 75 miles to Gloucester where she was buried alongside her husband.

English Mercia – Gloucestershire, Worcestershire, Herefordshire and Shropshire – was unusually stable during the Viking age compared to the rest of England. Along with Gloucester, Worcester became the centre of a Mercian revivial under Aethelred and Aetheflaed, extending into the more unstable areas of Staffordshire and Cheshire. In the 890s Aethelred and Aethelflaed issued a charted in favour of the church of Worcester. This is one of the few times in Alfred’s lifetime when the couple were known to have acted jointly (generally Aethelred acted on his own). By the end of ninth century Aethelred and Aethelflaed had fortified Worcester and granted the church of Worcester a half share of the rights of lordship over the city. This covered land rents and the proceeds of justice and in return the cathedral community agreed in perpetuity to dedicate a psalm to them three times a day and a mass and psalms every Saturday. In 904 their ‘friend’ Bishop Werferth granted a lease of land in the city to Aethelred and Aethelflaed as equal partners, to be held for the duration of their lives and that of their daughter, Aelfwynn. As the land included most the of city’s usable river frontage, it was valuable and control of it enabled the Mercian rulers to dominate over and profit from the city. 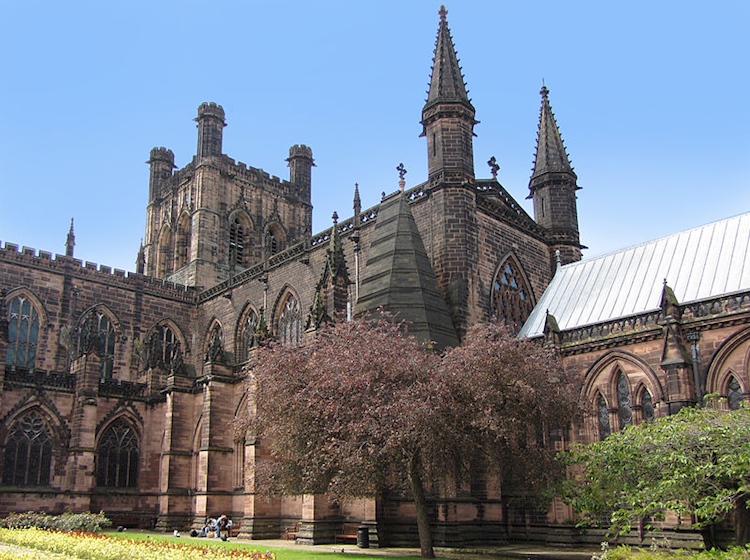 By 902 Aethelred had become ill with a debilitating disease and Aethelflaed was ruling Merica in all but name. During this period, the Irish had driven the Vikings out of Ireland and they came to Chester to ask for land. Aethelflaed granted them land in the area with the promise they would be peaceful. Soon the Vikings became restless and they launched a couple of unsuccessful attacks on the city. When Aethelflaed heard this she rode north to meet the Danes, fighting them outside the city and then falling back to draw the Vikings into the city walls. Once inside the walls, the gates closed and the Vikings were slaughtered by Aethelflaed’s army hiding inside. The people of Chester are also said to have defended the city by pouring hot beer down on the Vikings from walls and when the Vikings defended themselves with shields, the defenders hurled down hives of bees. Shortly after, in 907, Aethelred and Aethelflaed fortified the town of Chester, giving them control of the lower Dee and also a fortified, protected burh to use as base from which to harry the Northumbrian Danes. Aethelflaed rebuilt Chester’s walls, extending them to the edge of the river on the South and Western sides of the old Roman fortress to establish Chester at the centre of a line of burhs, stretching from Rhuddlan in North Wales to Manchester, protecting the northern frontier of Mercia. The same year, Aethelflaed founded the Church of St Werburgh which would later become Chester Cathedral.

Map showing England around 910, at the time of Aethelflaed – the site of the Battle of Tettenhall is marked

According to the Anglo-Saxon Chronicle, the Battle of Tettenhall (sometimes called the Battle of Wednesfield) took place at Tettenhall, near Wolverhampton on 5 August 910. In 909 the Vikings had begun rampaging again, but a major party was met by the united, formidable forces of Mercia, under Aethelflaed, and Wessex, under her brother Edward. The allies inflicted heavy casualties upon the Vikings and the Chronicle states that ‘many thousands of men were killed’. This opened the way for the recovery of the Danish Midlands and East Anglia over the next decade.

After Aethelred died in 911, it is said that Aethelflaed created a burh a year. Between 911 and 915 she erected forts at Bridgnorth and Chirbury in Shropshire to guard against constant raids from the Danes. Chirbury was fortified to guard a route from Wales to Runcorn on the River Mersey and in 912 defences were built at Bridgnorth to cover a crossing of the River Severn. Lady Aethelflaed placed a timber palisade around a burh at Brycg - the Saxon word for ‘bridge’ – which has been identified as Bridgnorth.

In 914 Aethelflaed remade the ancient Iron Age hillfort at Eddisbury, which overlooked the Delamere Forest, to protect against invasion from Northumbria or Cheshire. The following year she founded a new burh to control the Mersey crossing in Cheshire – this burh eventually became Runcorn.

Although there may have been some sort of Anglo-Saxon settlement around Warwick already, in 914 Aethelflaed turned Waeringwicum (which later grew in to the town of a Warwick) into a fortified stronghold, complete with a protective ditch and bank and topped by a wooden palisade. This vantage point allowed Aethelflaed to command the crossing of the River Avon to the south of the settlement, and the Fosse Way, a key route which ran through the middle of the garrison. 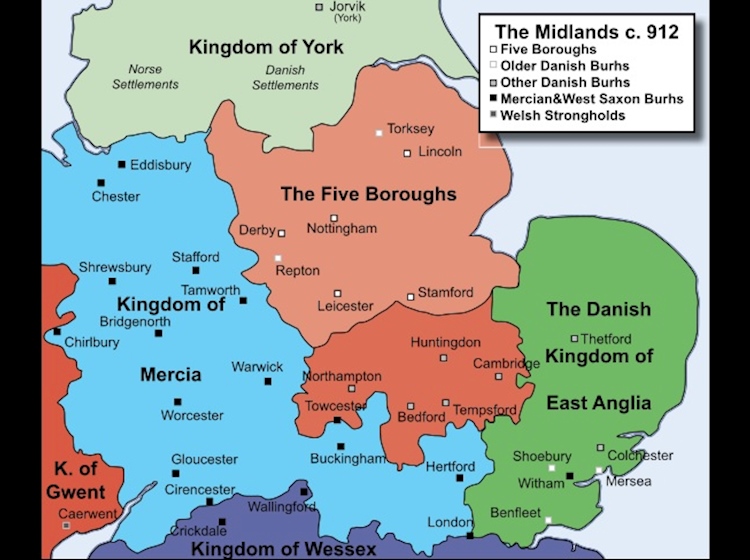 After leading a successful expedition into Wales to avenge the murder of an abbot, Aethelflaed recognised an opportunity to defeat the Vikings and negotiate for a lasting peace so she and her brother, Edward the Elder, launched a concerted campaign against the Danes in 917. Invasions by three Viking armies failed as Aethelflaed’s Mercian forces captured Derby and the territory around it, one of the Five Boroughs of Danelaw – the five main towns of Danish Mercia. This marked a tremendous victory for Aethelflaed, as in 918 she gained possession of Leicester without opposition and a few months later the great Viking stronghold of York also submitted to her after she formed an alliance with Welsh kings, the Kings of Strathclyde and Bernicia and the Scottish King Constantine. However, Aethelflaed was unable to take advantage of the offer as she never reached York – she died shortly after. It is worth noting that no similar offer was ever made to Edward.

A statue of Aethelflaed, Lady of the Mercians, with her nephew who later became King Athelstan has been erected in the grounds of Tamworth Castle

Tamworth served as a residence of the Mercian kings and in 913 Aethelflaed fortified the town, founding Tamworth Castle. Just a few weeks before she had planned to visit York, Aethelflaed died suddenly in Tamworth –  just as she seemed on the brink of ending the Danish threat forever. Her body was carried 75 miles to Gloucester to be buried alongside her husband, Aethelred, at St Oswald’s Priory.